Finally, I can spill the beans!
Even though I shared I was applying to school, I didn’t say much more because I didn’t know if I would actually get in.

But yesterday morning I got the acceptance letter into UVA’s Master in Nursing program!
I also applied to Emory, Columbia, and Vanderbilt and will be hearing back from those schools in January and February, but for now at least I know I am actually going back to school.

And I’m going back to school to become a Nurse Practitioner!

Back in August, after a year working as an RD I started to feel limited in my job. The practice I work at and the doctors I work with are incredible. I get to teach and counsel and help people transition to a [mostly] plant based diet, reverse chronic disease and beat cancer, and talk about quinoa and give grocery store tours and lead workshops and give talks to healthcare facilities and corporate businesses. I love it. And I feel super blessed.

Being an RD is wonderful, but after a year it wasn’t as fulfilling anymore. As Nutshell Nutrition grew, I was seeing more and more clients with all kinds of health issues. I had this passion for women’s health that was growing exponentially. I read and researched and learned a ton from the endocrinologist I work alongside, Dr. Bush, but I was at a dead end in my practice. I wanted to comprehensively care for the entire person and as an RD I couldn’t.

And that frustrated me.

So one day I began to think….could I actually go back to school?
I began my undergraduate career at Indiana University as a pre-med student, but after two years my passion for nutrition and frustration with traditional, diagnose-and-treat medicine, steered me towards a career in dietetics. But when I began working at Revolution Health Center with these doctors who not only cared about nutrition, but centered their medical practice around it, my whole view of healthcare changed.

I initially looked into PA [Physician Assistant] school because I had the prerequisites, clinical experience hours, and it would only be two years. But it wasn’t sitting right with me, something just seemed off and I couldn’t envision myself as a PA. And then the wellness coach I work with, who is a former PA, asked me if I ever thought about being a Nurse Practitioner.
Ummm, no. I don’t even have an RN and I’ve never taken a nursing class…

But she put the idea in my head so I began researching. And reading about nursing and the role of the Nurse Practitioner and it felt so right.

Comprehensive, holistic care focused on education and prevention and empowering patients.
Now, I realize MDs can totally care this way too…I work with two doctors who provide phenomenal comprehensive, preventative care. But the nursing education and role of the NP was exactly what I was looking for. And then after researching schools and programs I learned there were NP programs designed for people who already have a Bachelor’s degree in a non-nursing major. And these accelerated programs only took 2 to 2 1/2 years to complete.

What?!
I was ecstatic.

But for a day or two I hesitated.
Was I insane to go back to school after just finishing 5 years of school to be an RD?
Was I making a mistake by leaving this one-of-a-kind job I never thought I’d find?
Was I crazy to potentially leave this town I love with all these amazing friends and community?

After talking with momma Coale, the answer was a definite no.
I wasn’t crazy. I couldn’t imagine the rest of my career as an RD. I wouldn’t be happy. I knew I wanted to help people beyond nutrition. I’m single, don’t have kiddos yet, and am only 24. If there was a time to make a career change it was now.

So the next day I signed up for the GRE, took the GRE three weeks later, and began the application process. In the 4 months from mid August to the end of November I studied and took the GRE, visited schools and completed applications. Once I decided to go back to school, I just dove right in. 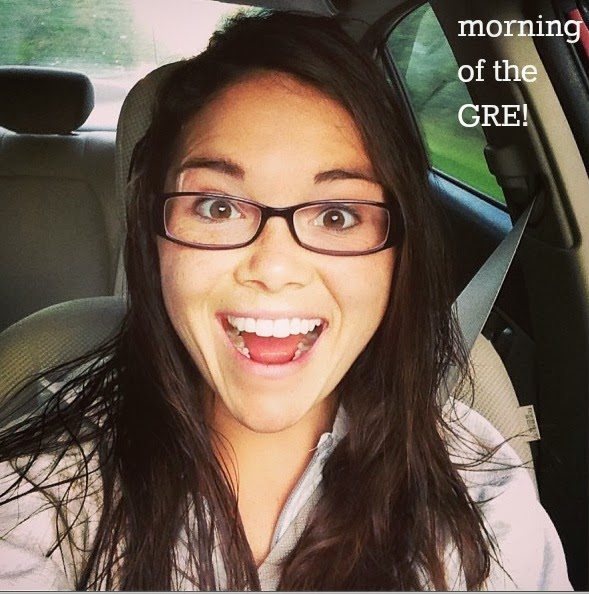 My mom was my biggest encourager. She’s amazing. And she’s the one that encouraged me to just go for it. And I’m so glad I did.

I’m excited. So, so excited. As an NP, I’ll be able to practice independently from an MD or I can practice alongside an MD and that autonomy will be awesome. NPs can essentially do everything an MD can, except NPs are nurses and MDs are doctors. It’s crazy to me how I began college as a pre-med student, then became an RD and will eventually be an NP. But God knew exactly what he was doing. I didn’t.

I’m so glad I became an RD first. I’ll always be an RD and I see becoming an NP as a career expansion rather than a career change.

So for now, I can rest easy knowing I’m accepted to at least one school.
But, I’m dying to find out about the other three and see where I’ll be come May.
Here’s to the next adventure!

« What Taking a Break From Running Taught Me + Oatmeal Recipe
Merry Christmas Eve! »