Yesterday was a hungry day.

One of those days where you’re starving from the second you wake up and then find yourself hungry every couple of hours no matter how many nutrient-dense-supposedly-filling foods you put into your mouth.

This weekend was crazy busy with a friend in town where we walked all over the city, stayed out late all weekend and then I spent Sunday studying [aka cramming] for a med/surg exam, was up till 1am and then woke up at 6am to finish studying before my exam at 9am. On Monday, I had class till 3, a follow up session with a Nutshell client at 4:30 and then made dinner at 6pm and was in my bed at 7pm and asleep by 8. Guys, I’m so sorry for leaving you hanging on Monday. All that to say…life has been super messy, yet a good messy, and I think yesterday’s hunger beast was my body’s attempt to pick up the pieces.

But it reminded me of so many conversations I’ve had with clients about letting go of the ‘eating timeline’ that so often controls our eating habits. If the body is hungry, as in true physical hunger, who are we to decide that, “Oh, I’ll just ignore that since it’s not my normal hunger..” 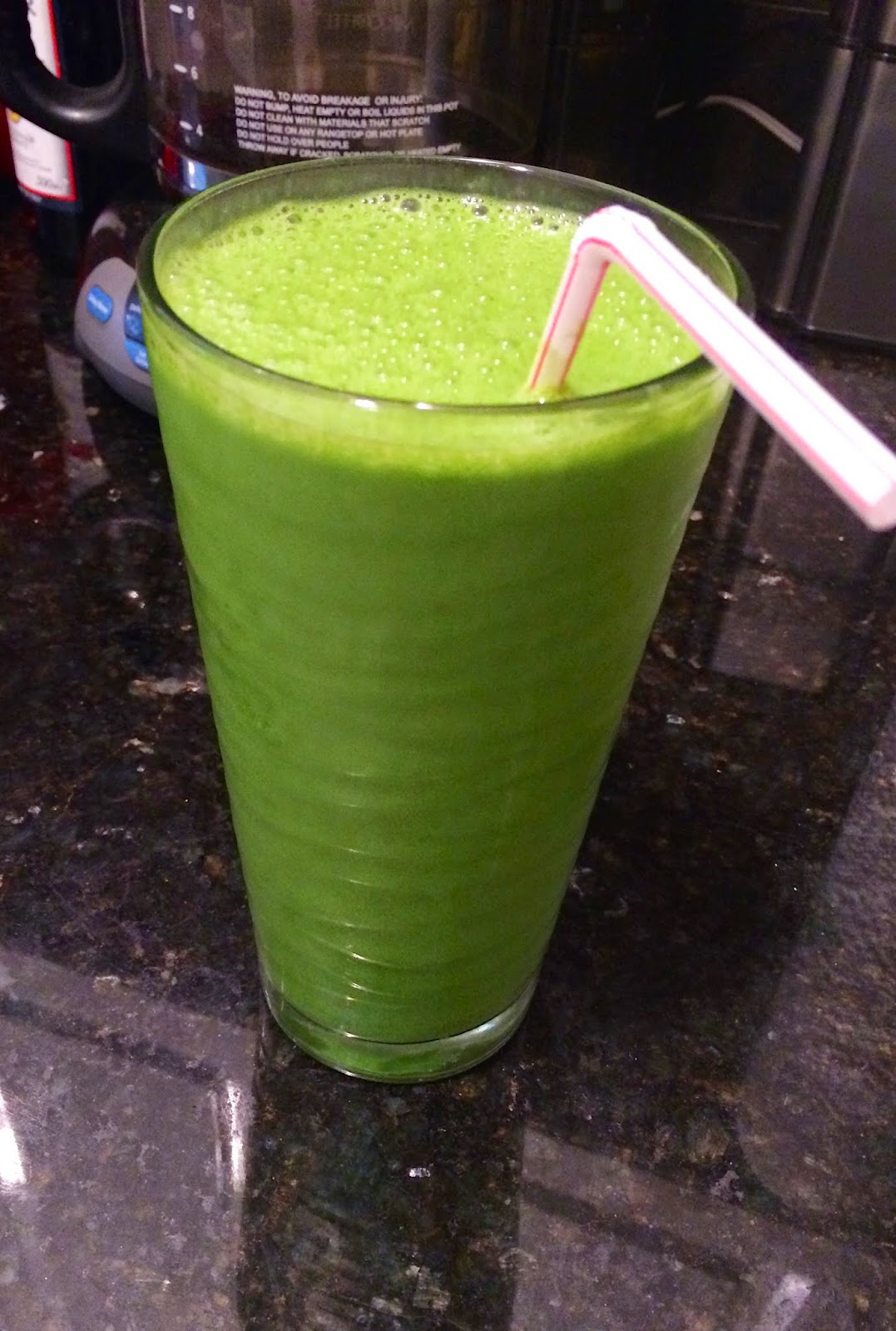 After going to bed at 8pm on Monday night, I was up at 5:15 yesterday morning so I could finish up assignments that didn’t get done Monday night and also have a long quiet time before a client at 8am. I woke up starving so while I sipped coffee I also drank a green smoothie. Do I usually drink green smoothies at 5:45am? No, but the worst thing I could do for myself was suppress my appetite with more coffee. Coffee is not food and drinking in hopes of putting off breakfast wreaks havoc on your hormones.

WIAW breakfast #2 was right before my 8am client, blueberry + pumpkin buckwheat pancakes with sliced banana and sunbutter. Typically, this holds me over for almost 4 hours, but not yesterday. 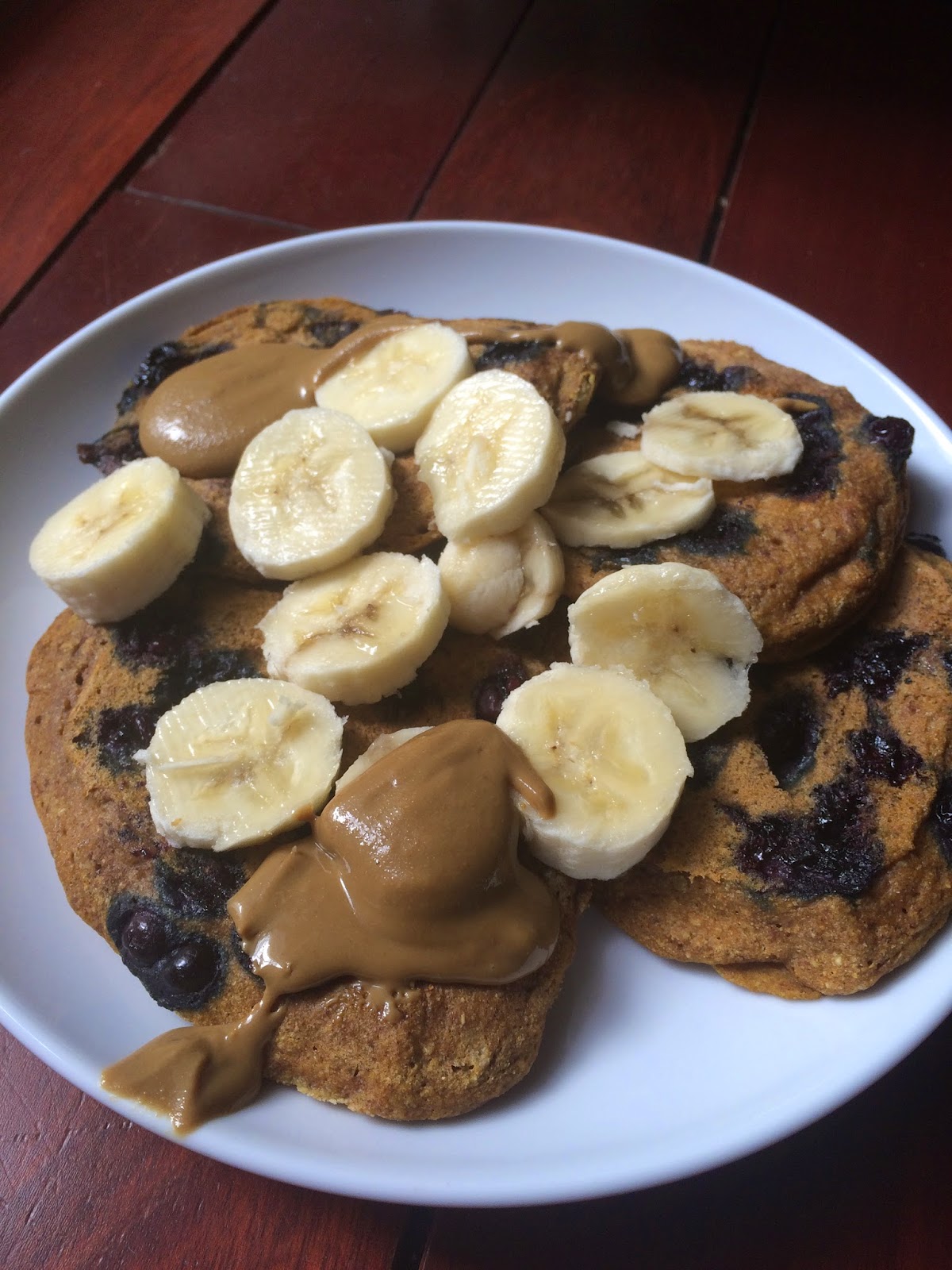 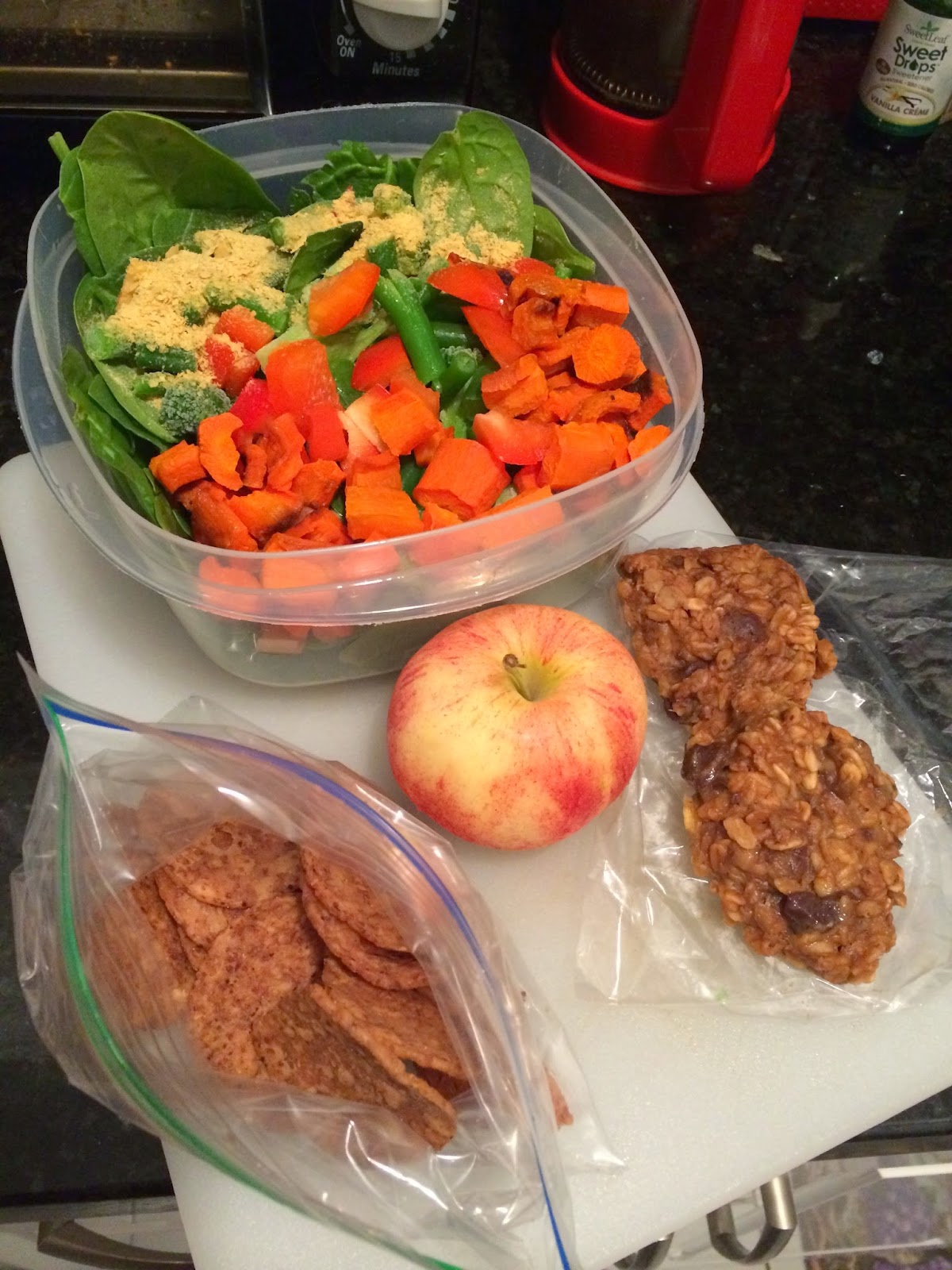 Most of the time, lunch comes anywhere between noon and 2pm just depending on the day. Yesterday though, I was hungry at 10:30am so right after our group presentation I ate lunch at like 10:45 because a snack was not going to cut it. Spinach salad with roasted carrots in coconut oil, green beans and bell pepper + nutritional yeast along with black bean chips, an apple and two peanut butter chocolate chip cookies from the freezer.

But if I were to adhere to my ‘normal’ eating timeline, that means I would have ignored my hunger, caused a stress response by not eating and therefore cortisol would have been released due to me not feeding my body. And cortisol is not a good thing. It causes all kinds of metabolic effects.

Just like calories are not a bank account, our appetites do not follow an itinerary. We assume that if we ignore our hunger because it’s “too early to eat” or “it’s only been an hour or two since lunch” or whatever other arbitrary rule we’ve come up with, then we are doing ourselves and our bodies’ a favor. That we are being healthy. But ignoring hunger is the antithesis of healthy.

Of course, choosing more nutritious foods when your appetite is raging is a good thing. They fill us up and keep us satiated. But sometimes, a green smoothie + hearty buckwheat pancakes just isn’t enough to carry you to your normal lunch time. After eating lunch before 11am though, I found I was full until almost 3pm and at that point was only hungry enough for a smaller snack. Almonds + cucumbers and hummus. And a couple hours later after a 3 mile run, I ate a hearty pumpkin oatmeal cookie + a banana with peanut butter. 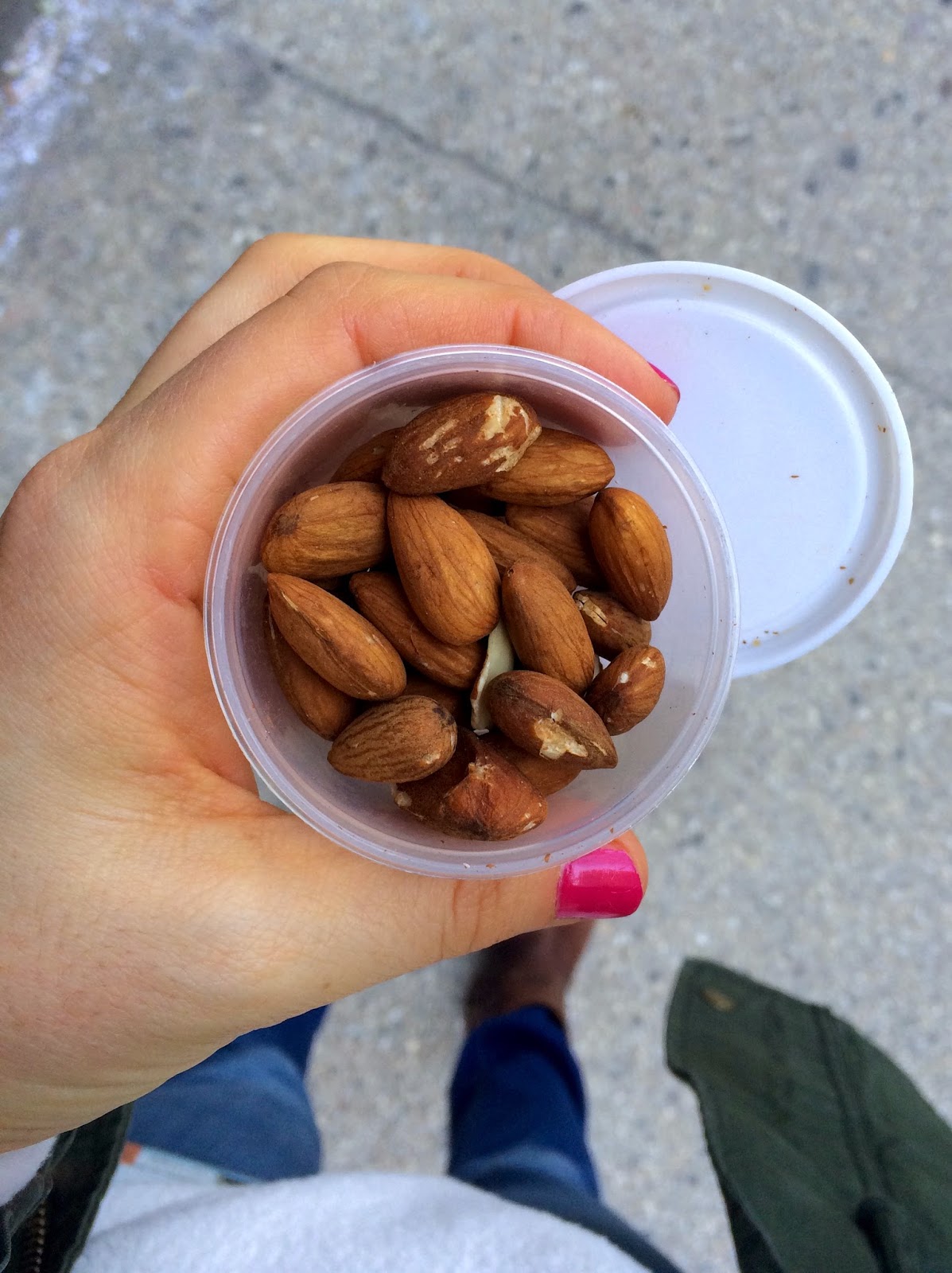 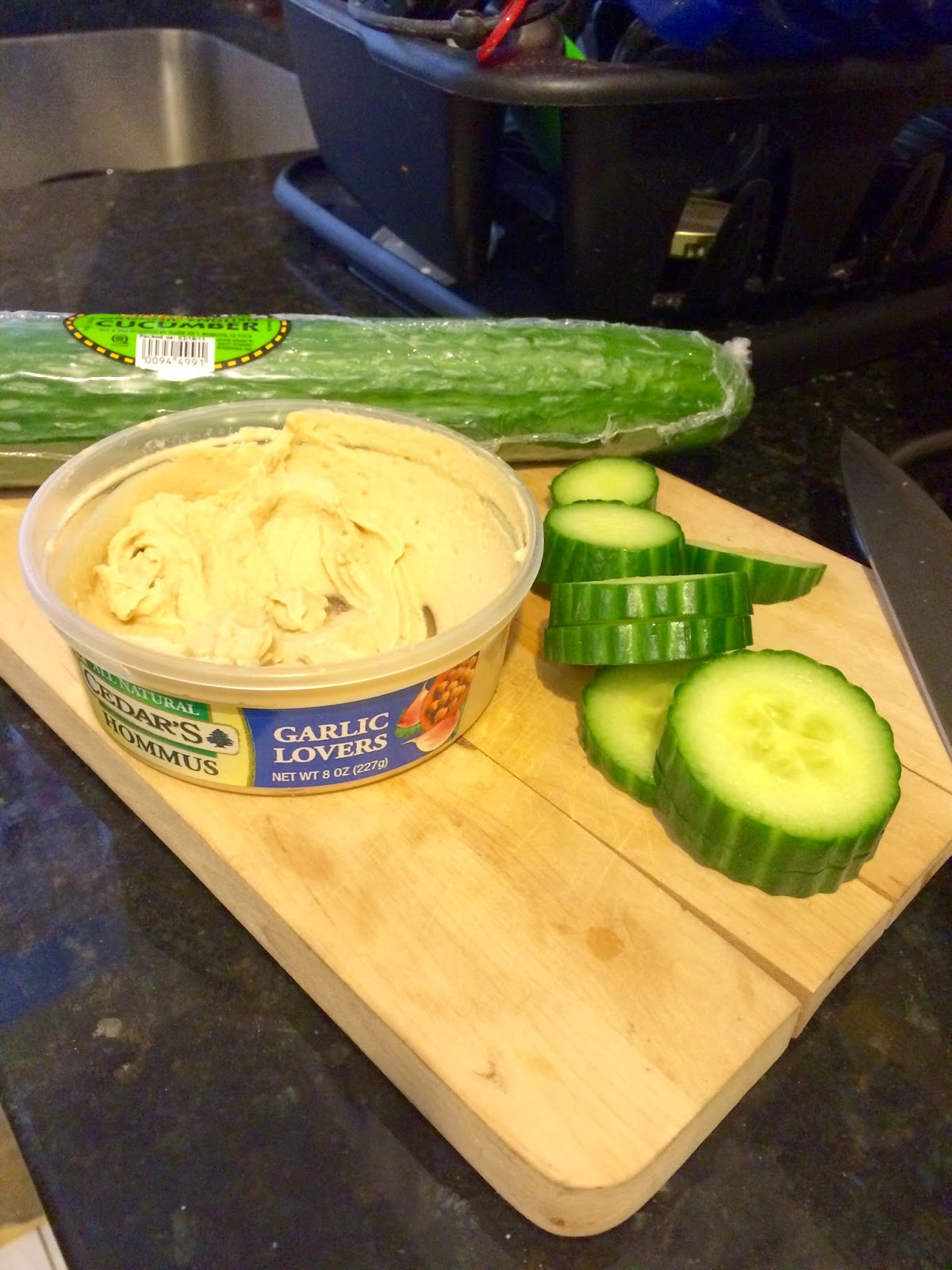 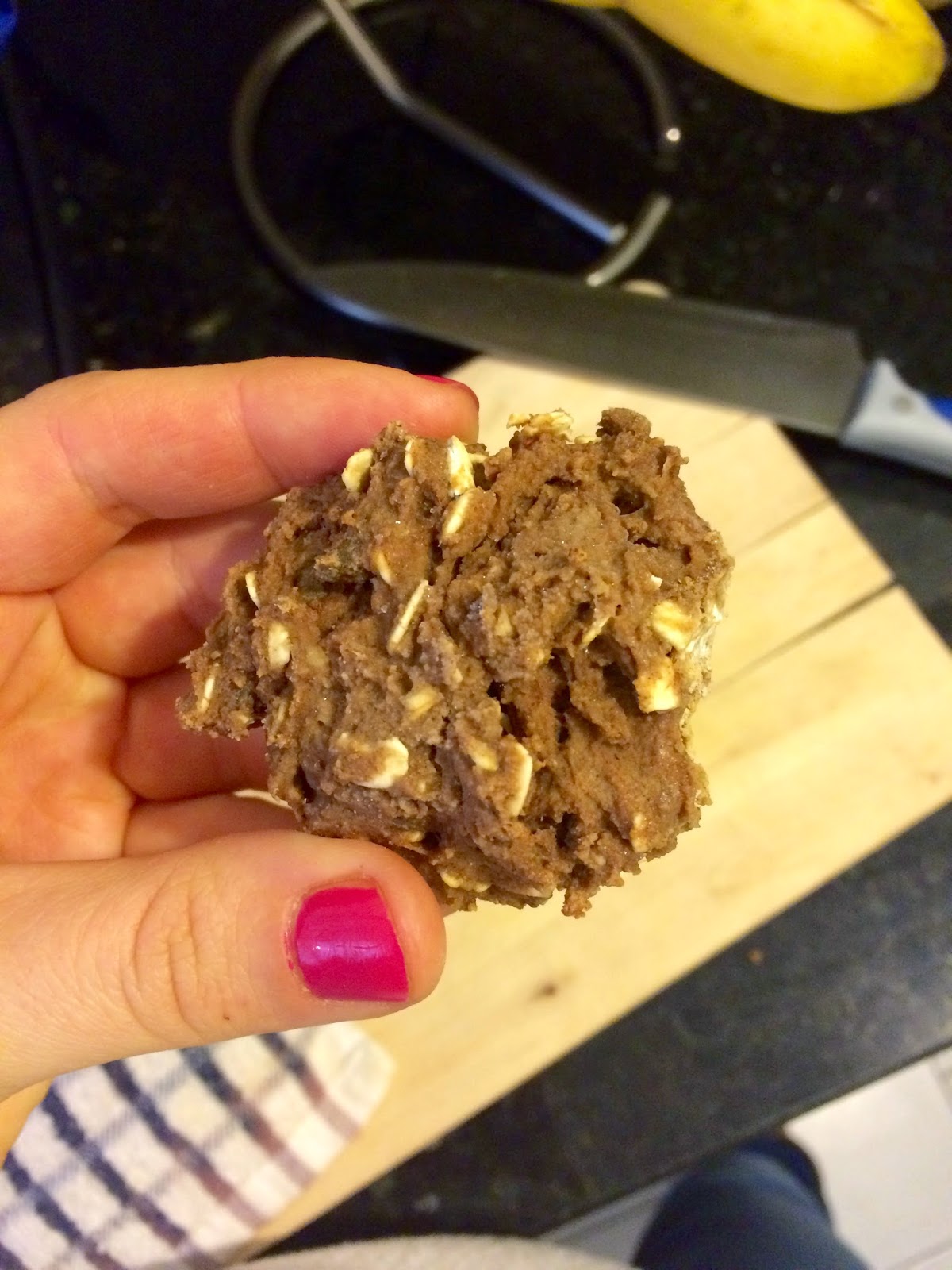 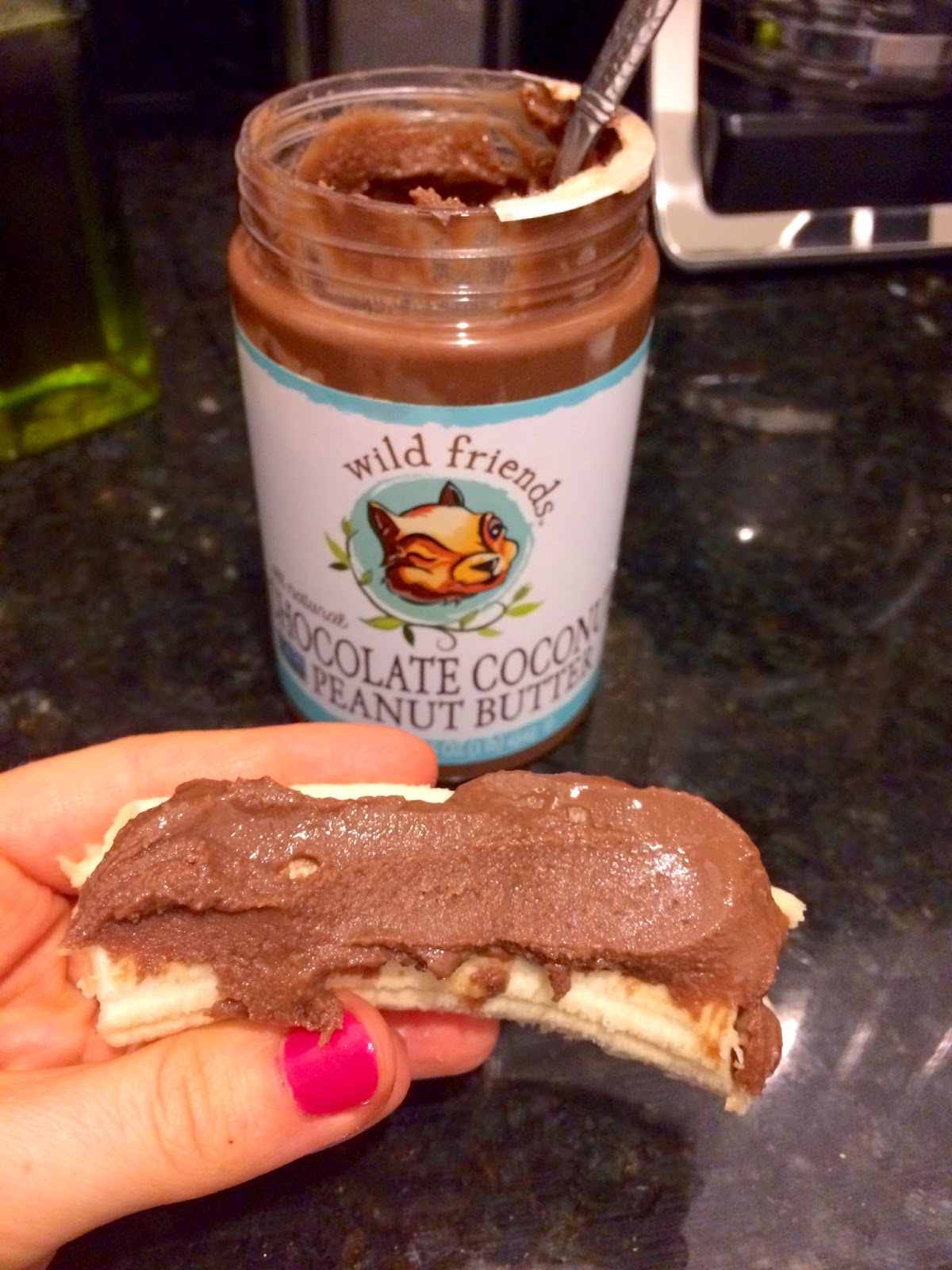 My point through all this rambling is that if you listen to your hunger even if it’s atypical from what you’re use to, you just might find that those calories you thought you needed to save for later, don’t need to be saved at all. Because after eating earlier than normal and more than I normally would by noon, I wasn’t all that hungry by the time dinner hit. So I kept it simple with two fried eggs, sautéed mushroom and kale sprinkled with nutritional yeast + garlic powder + sea salt and a sweet potato with coconut butter. Sometimes I would still be just as hungry and that’s okay too. 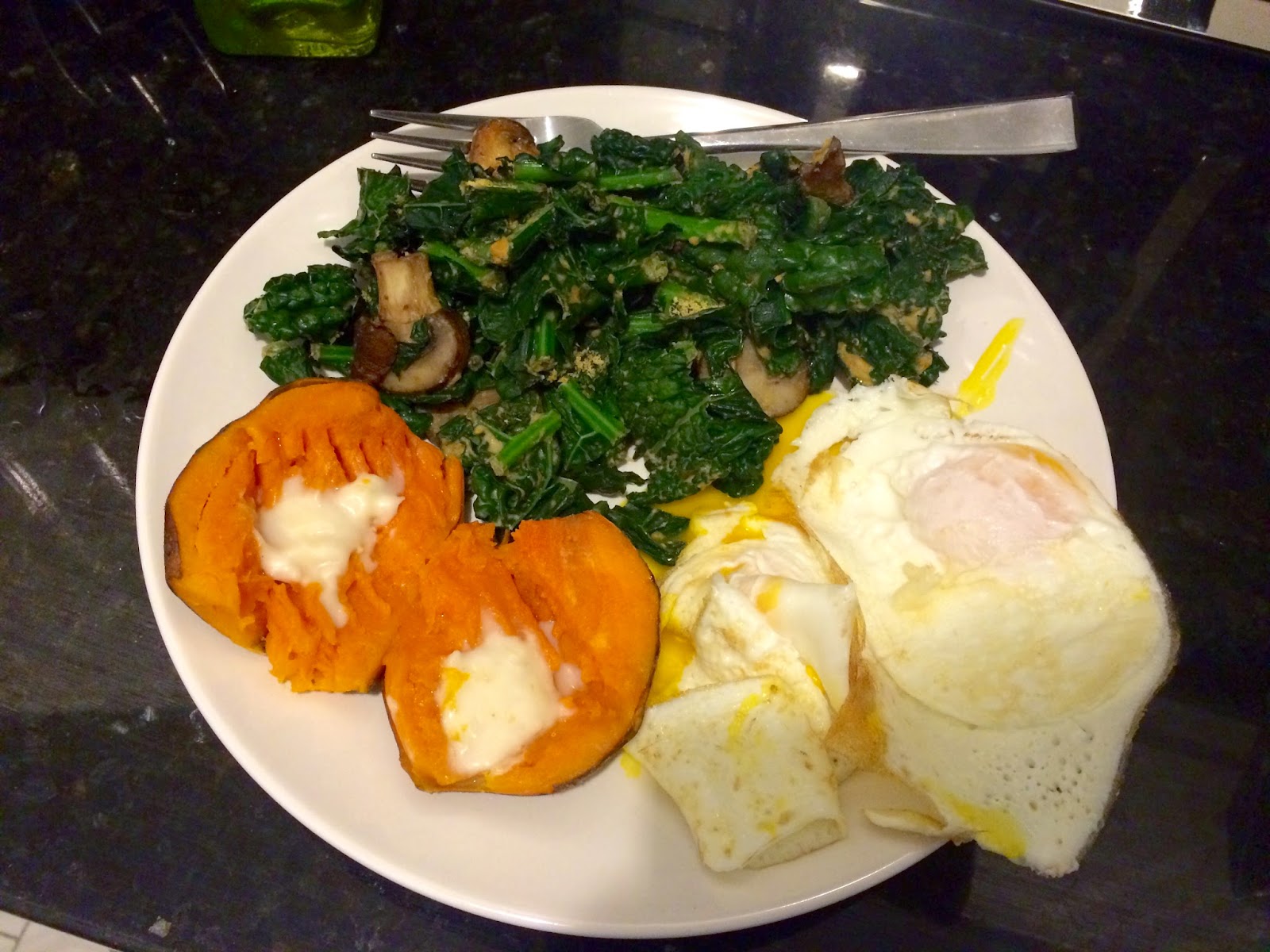 And after a few pieces of chocolately freezer fudge and the other half of post-run banana with PB, I was ready for bed by 9pm because I promised myself to get a solid 8 hours of sleep every night this week. 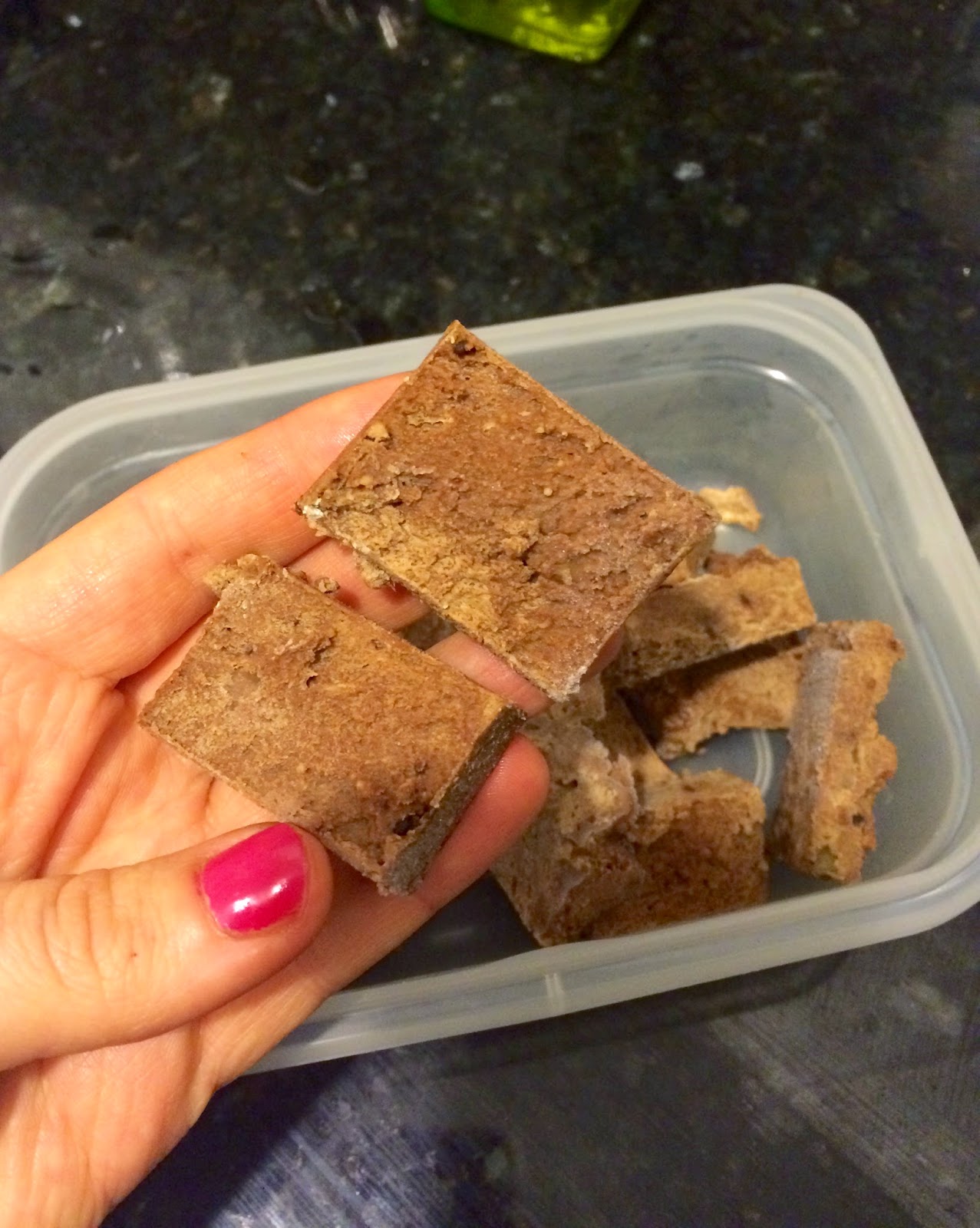 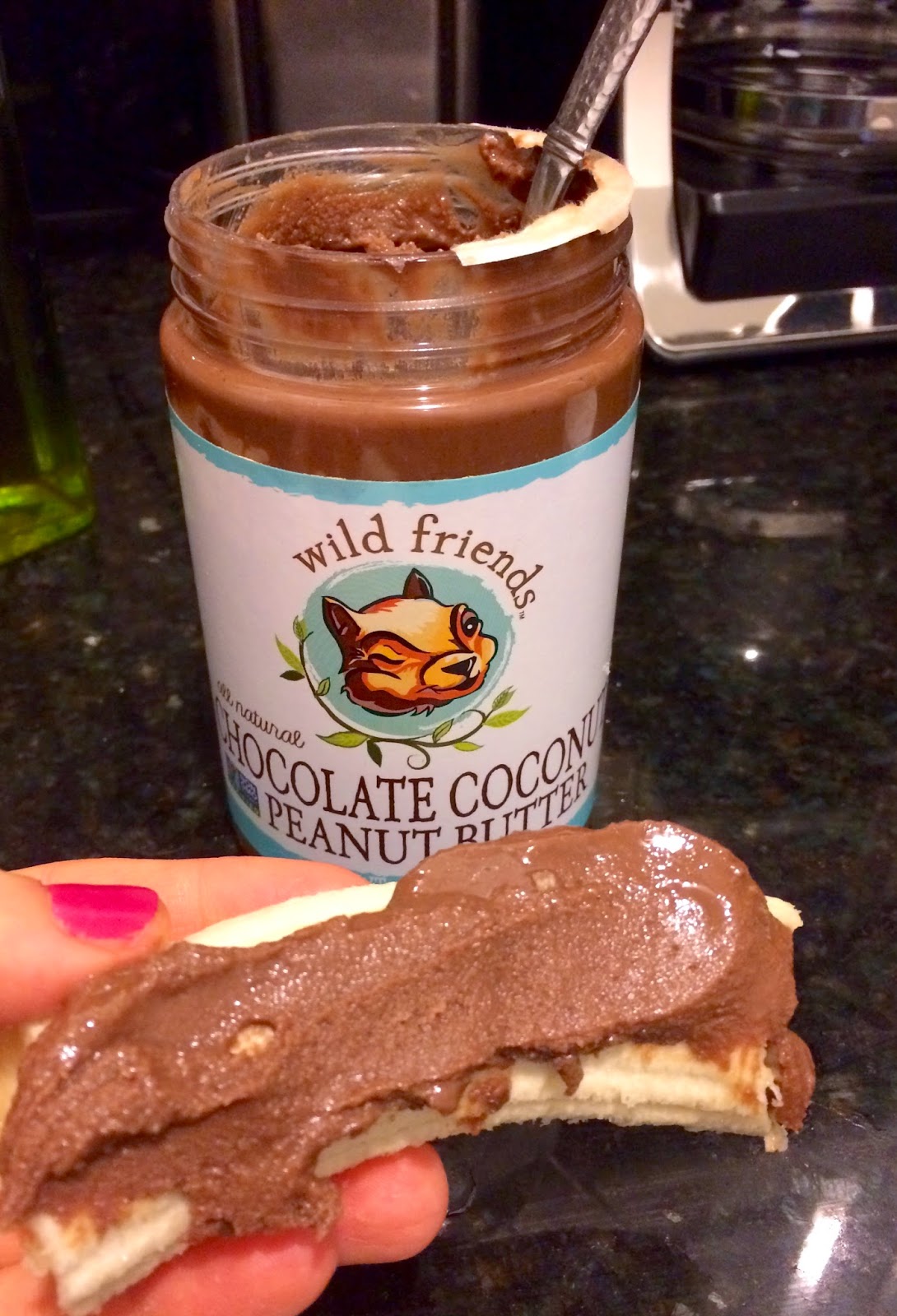 Life is messy sometimes and our appetites and hunger don’t follow a consistent rhythm and routine. The beauty of the human body is that it waxes and wanes depending on so many factors, it’s not an exact science in the least. And the best thing we can do for ourselves when it comes to hunger is let go of rules and routines and expectations and keep food simple. If you’re hungry, you should eat. Because life is too short to feel voluntarily hungry.