How often do we walk into work or class or whatever and hear somebody talking about how they forgot to eat breakfast or they just weren’t hungry or we see them noshing on a Special K bar and a banana.

This might be their regular routine or maybe they’re going out to dinner tonight so they have to save up their calories so they can “afford” to splurge.
So for breakfast its special K and a banana or maybe some oatmeal and berries or perhaps a smoothie or some other low calorie concoction that they hope will keep them full from 8 to noon.
Why do we treat calories as if they’re our bank account?
Calories are not meant to be saved so we can splurge and indulge ourselves. Our bodies are designed to be burn energy. But just like if you don’t have money in the bank you can’t spend any money- if you don’t have calories coming in, your body has a MUCH harder time spending them.
I see this all. the. time. Breakfast gets skipped or is one of the smallest meals of the day, lunch is a big veggieful salad with some protein and some fat..maybe…and then carbs get forgotten.
Now, of course its not always that dramatic. Maybe we eat a smaller breakfast and lunch because we’re afraid we might get hungry later. And if we’re hungry later and we don’t have enough calories left then that’s no good and makes us anxious. But how irrational is that? If you’re hungry then clearly that means you should EAT.

When we wake up in the morning our bodies need a good, hearty breakfast to break the fast. Dinner was probably 10-12 hours ago and we have a demanding day ahead. In order to get your metabolism running in the morning you have to put something in the tank. 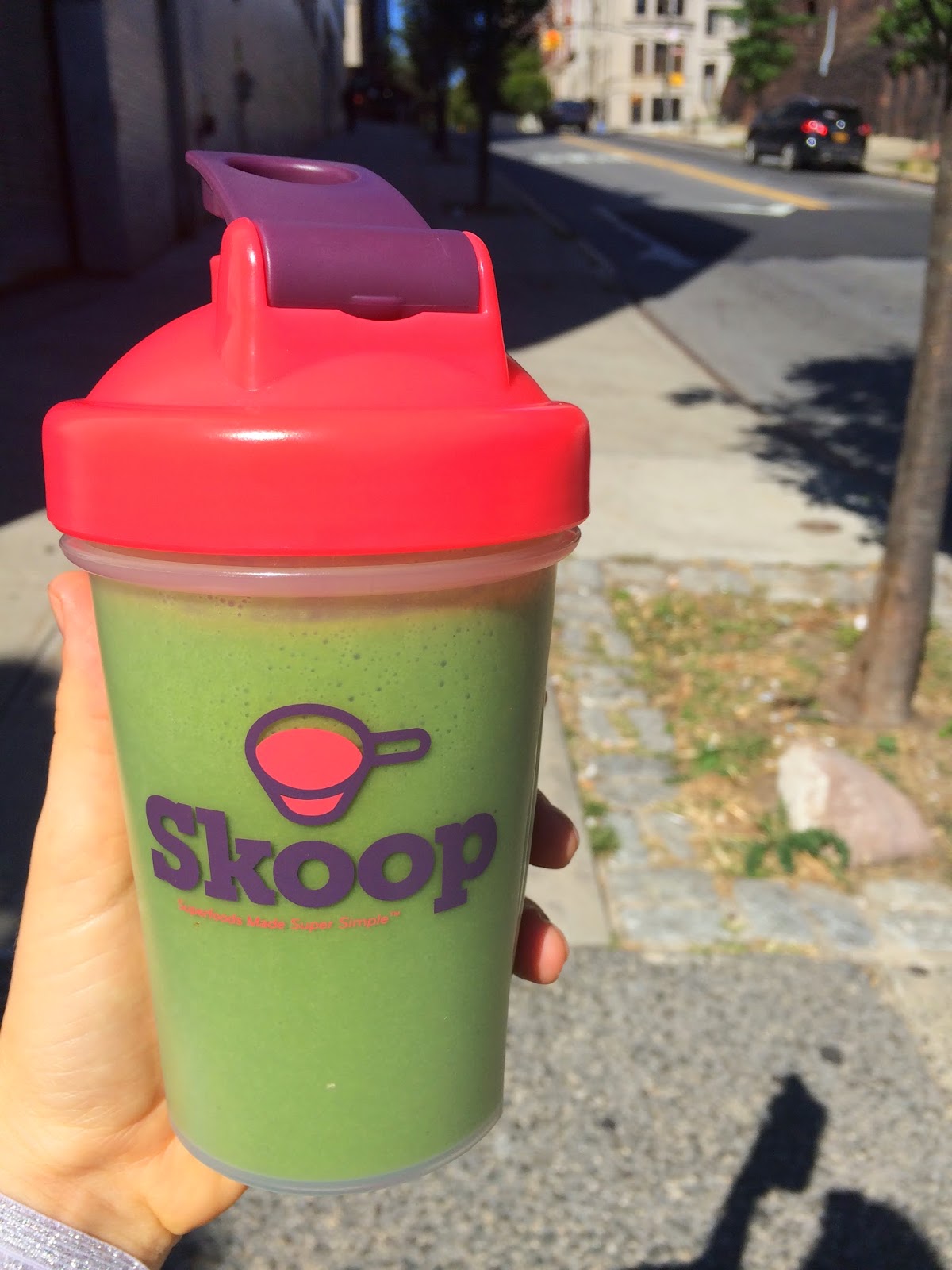 I go to bed excited about breakfast…its shamelessly true. And a big bowl of oatmeal with nutbutter + a green smoothie is something I found sticks with me and never gets old. This WIAW morning’s variation was pumpkin oats with blueberries in an almost empty nutbutter jar that probably had a good bit of nut butter left. Breakfast has to hold me from 7 to noon because we actually don’t get a snack break and since I’m on a psychiatric unit the bathrooms and doors to the unit are locked so we can’t get anywhere without our instructor- but if you’re able, I highly recommend eating a mid morning snack! 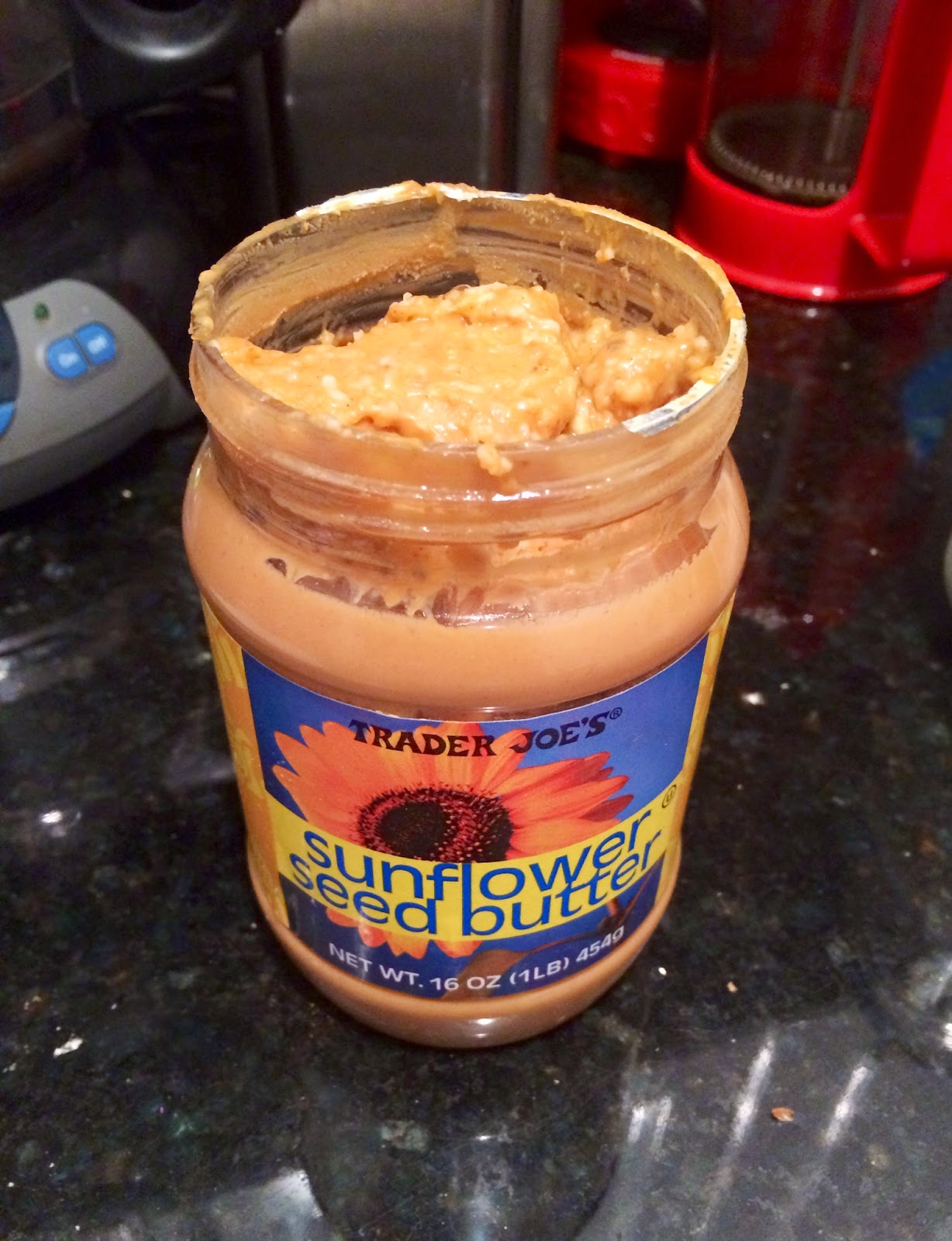 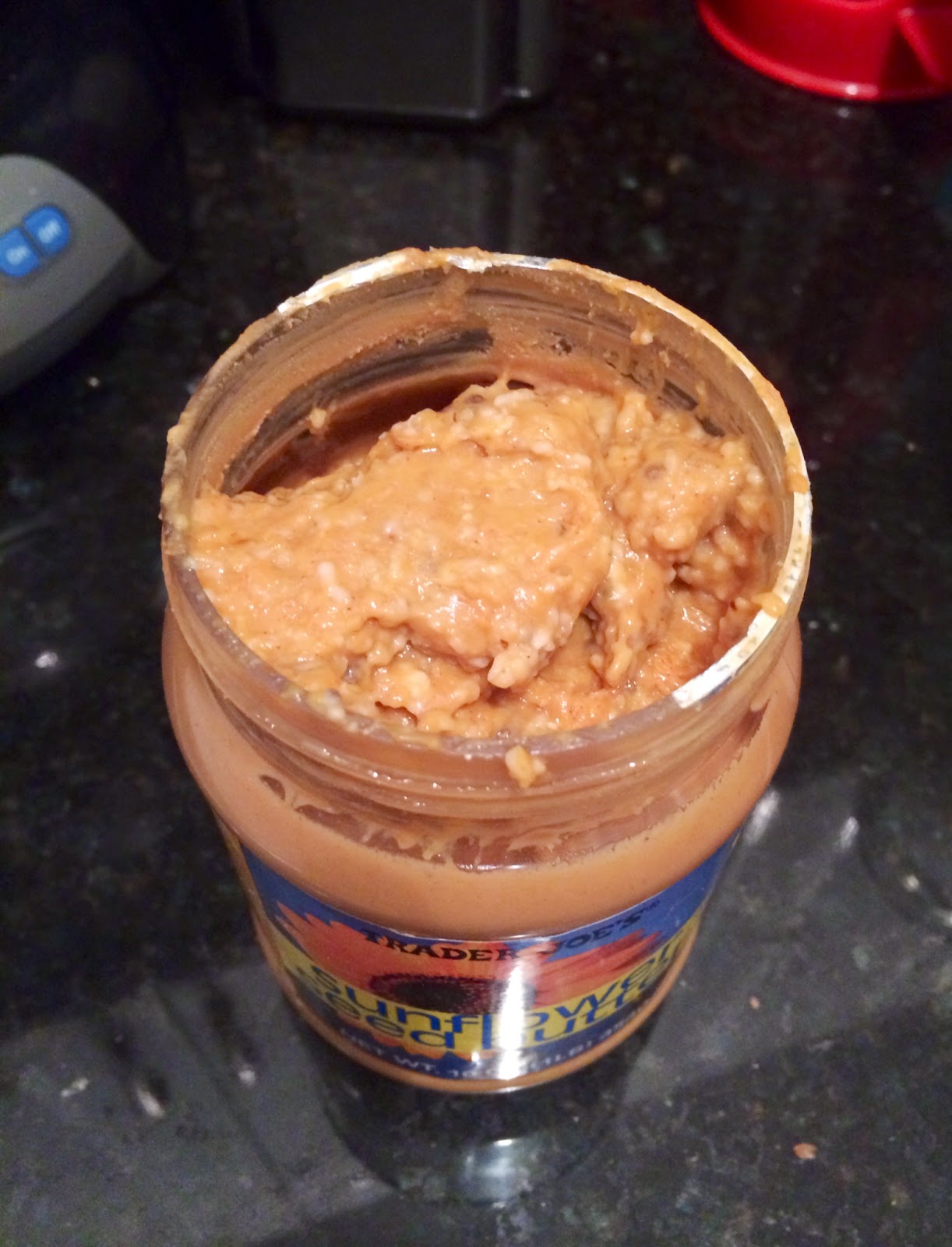 Lunch should include a good balance of proteins + carbs + fat and be enough calorically. Because if its not, typically we end up snacky even though we just ate. You know the feeling when you want your afternoon snack right after you just ate lunch? Yea, that’s likely why. Because your body isn’t satisfied for one reason or another.

I’m loving kale salads lately- so much so I bought 4 bags at TJs and passed on spinach. I massaged the kale with apple cider vinegar, olive oil and sea salt and added nutritional yeast and then topped that with frozen, defrosted green beans, red bell pepper, leftover roasted butternut squash and avocado. Lunch also included edamame, a pear and one of Alexis’s AMAZING cinnamon raisin balls. 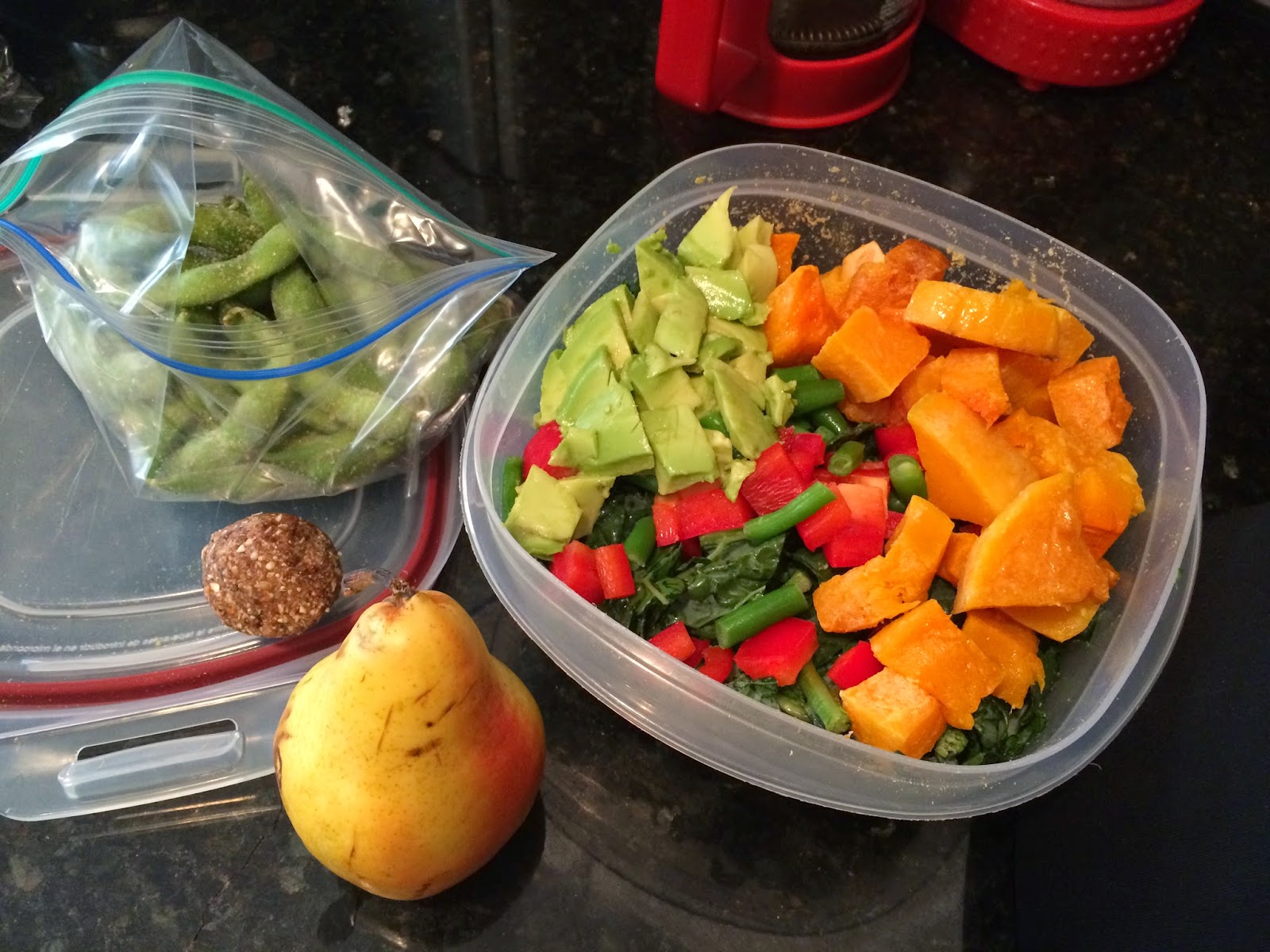 Just because you’re going out to dinner doesn’t mean you have to skip you’re afternoon snack (or snacks) and suppress your hunger with coffee and a few liters of seltzer. Doing that will likely set you up to eat more than you intended, feel crazy around food and then you are left feeling overly full and the guilt cycle begins. 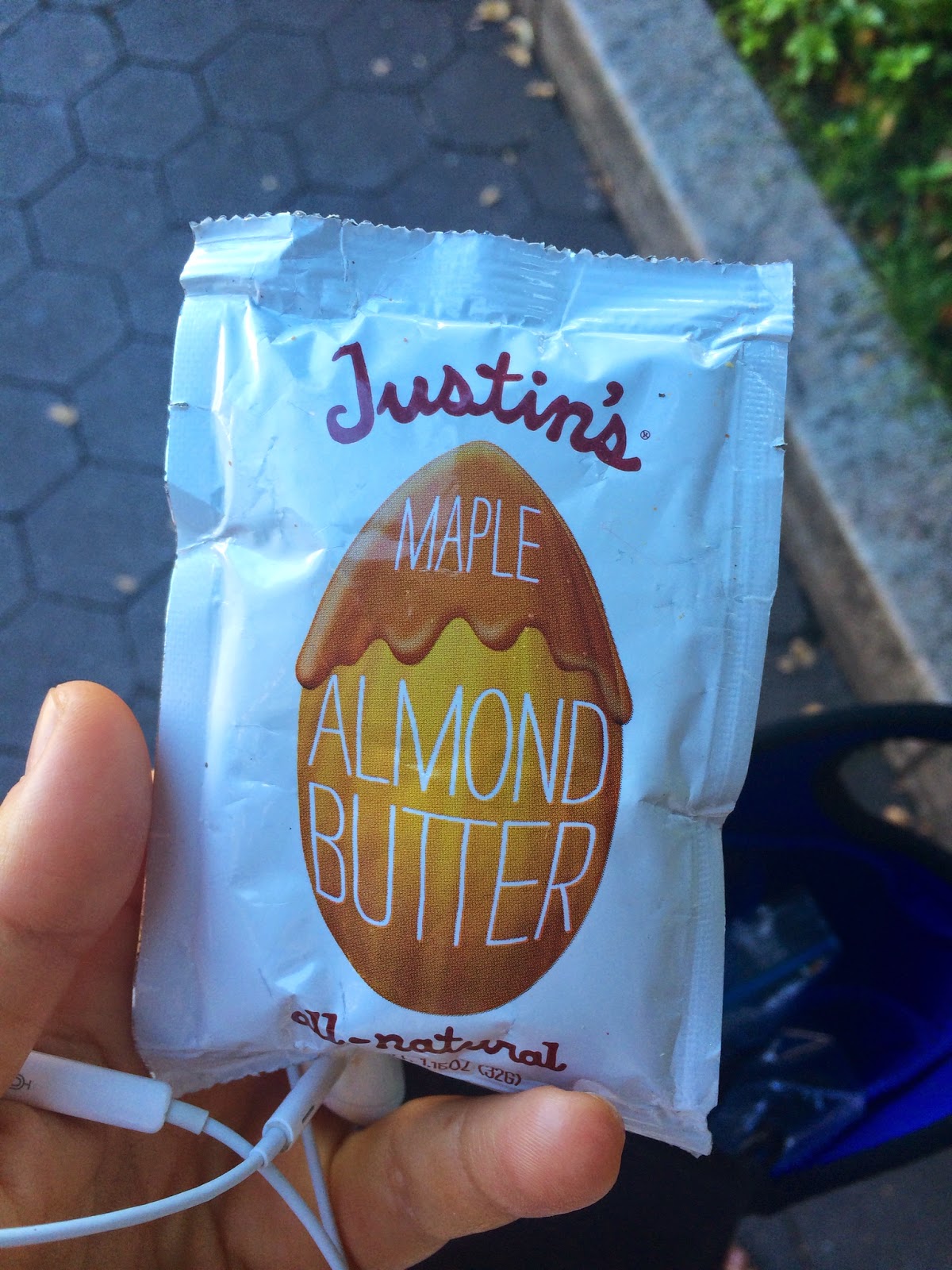 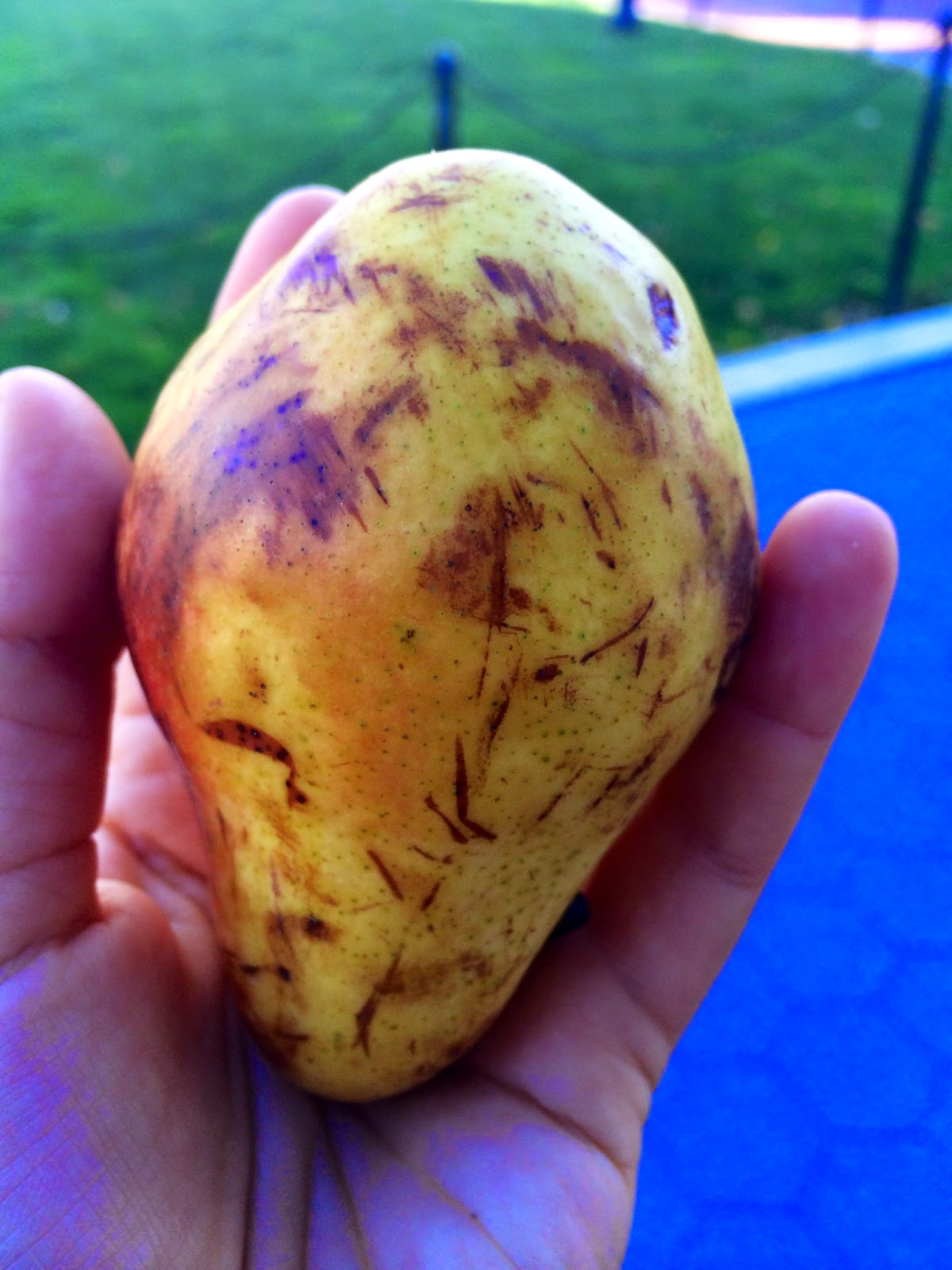 Justin’s AB straight from the packet, a banged up pear and plus a bowl of TJs cheerios + almond milk 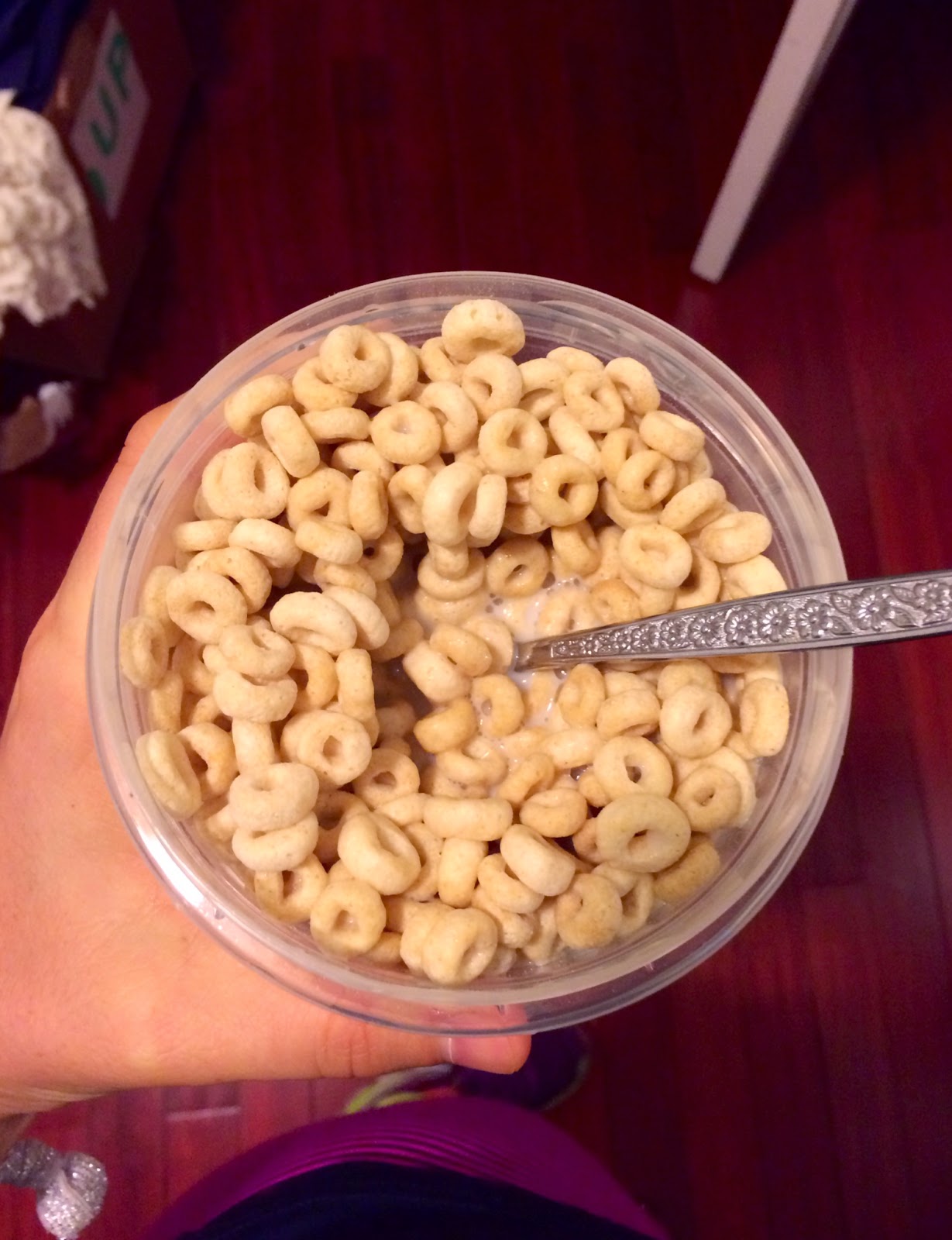 Eating out or a birthday dinner or anything out of “routine” doesn’t automatically mean indulgence or gluttony. Eating out is a normal thing and celebrations are a wonderful part of life that should be emabraced! And if they involve cake or something you don’t normally eat- well that’s the beauty of going out to eat and having somebody else cook and do the dishes. Depriving ourselves before anything has even happened not only sets us up to overeat, but it glorifies eating out or celebrating and associates those events with overeating. And that’s not a healthy way to approach food either. 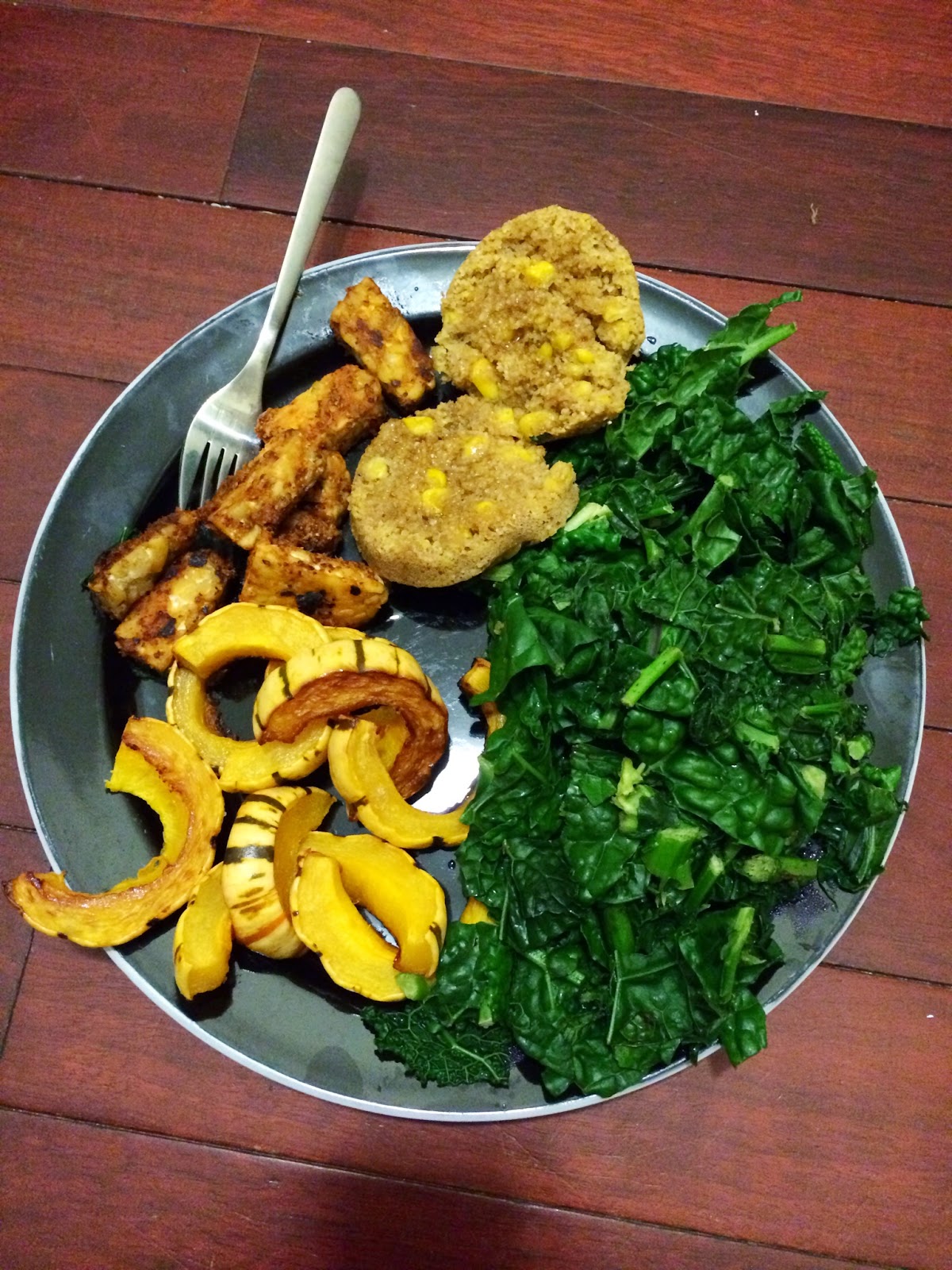 Dinners this week have been BBQ tempeh (just coat a block of chopped tempeh with TJs BBQ suave and bake at 350 for 35 minutes), roasted delicata squash, sauteed kale and cornbread with coconut oil and honey.

Our bodies need calories, especially in the beginning half of the day when we’re most active and using our brains and engaging with others. And if you’re hungry when you didn’t expect to be, that’s an awesome sign that you’re metabolism is humming along, your body is using the energy you give it,  and you should eat something again because your body is out of energy.

Perhaps some super charge me cookies with almond milk and a spoonful of nutbutter. Night time snack deliciousness! 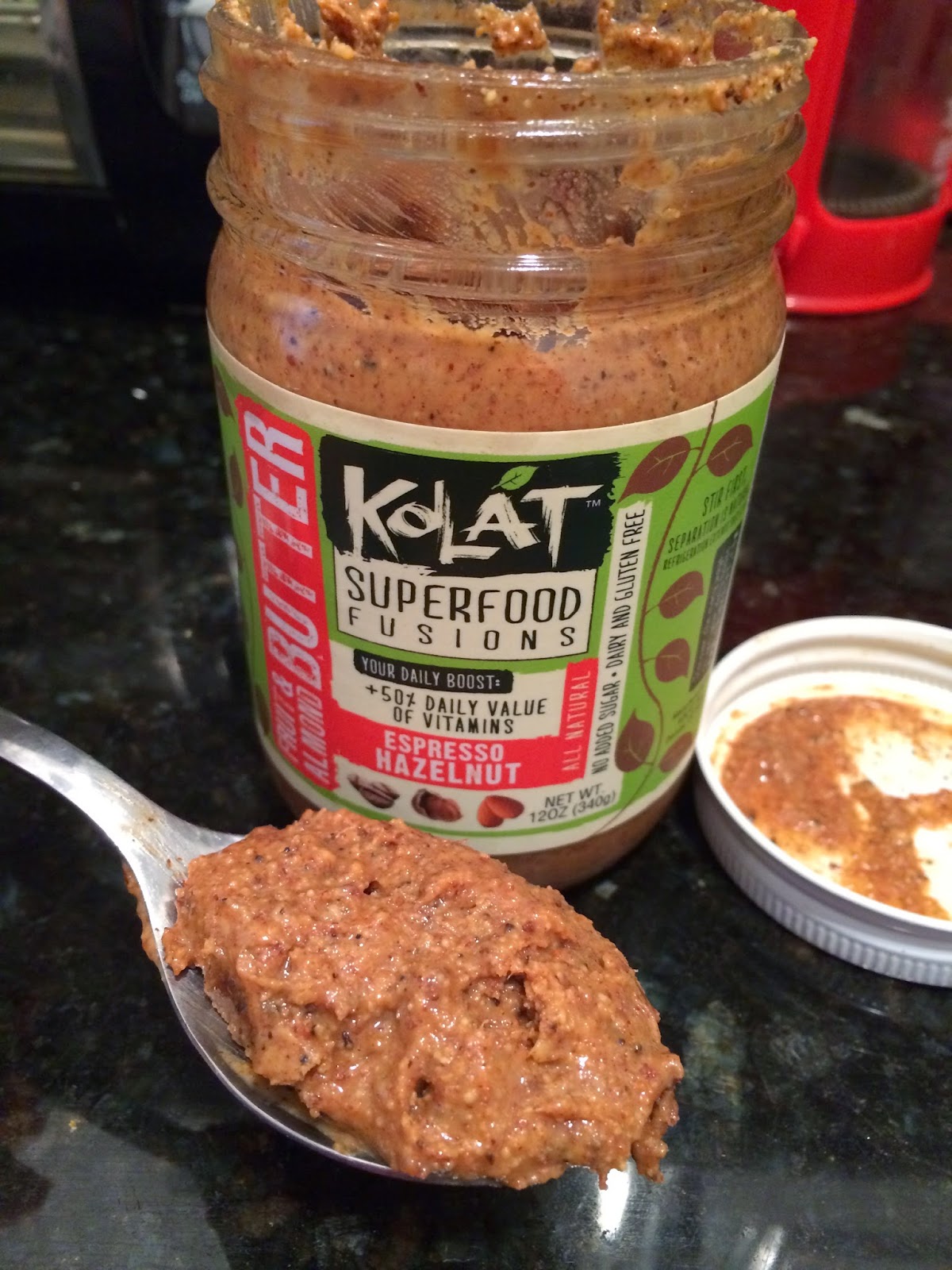 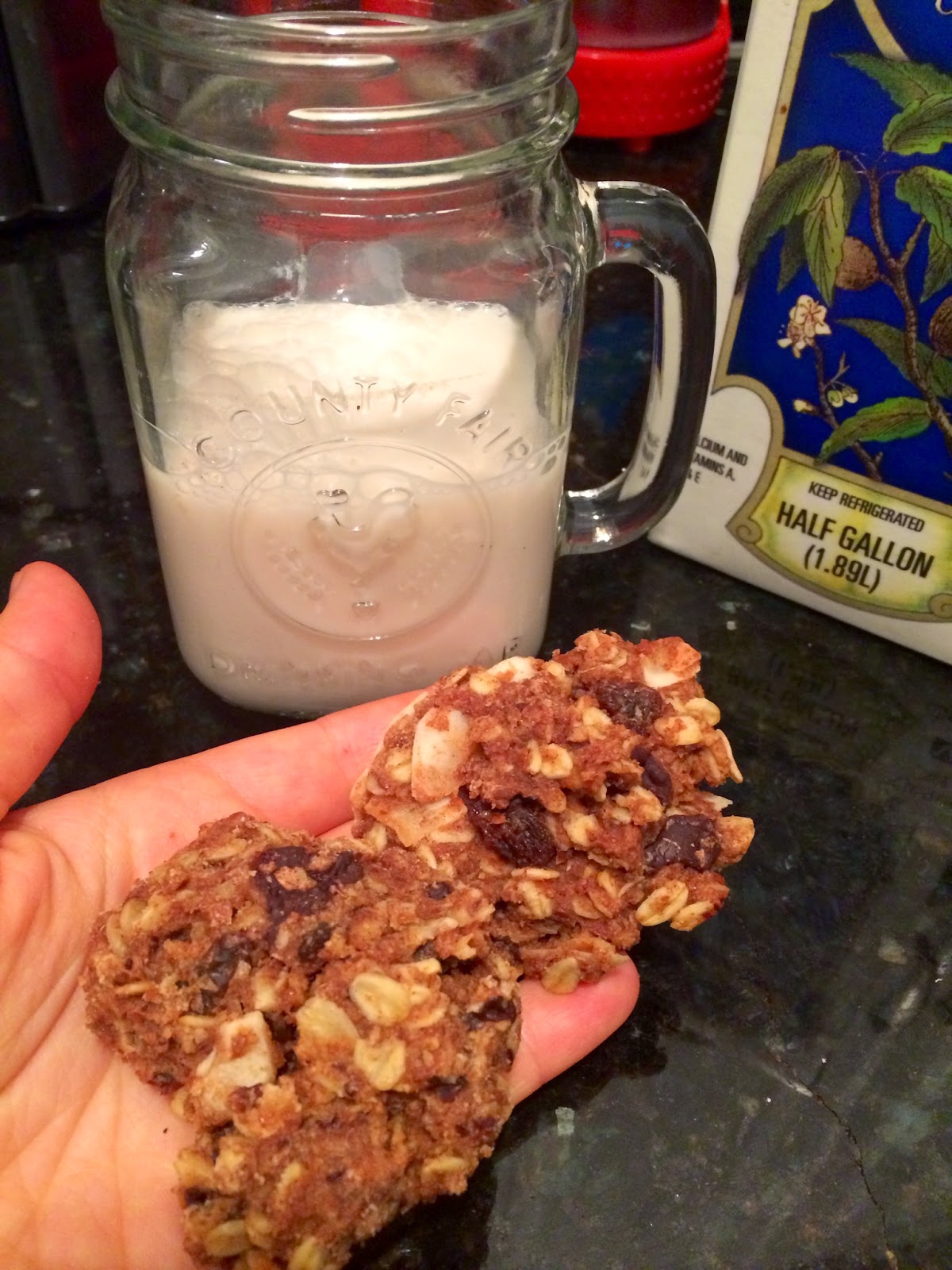 Calories aren’t a bank account, so we shouldn’t treat them as one.