We are currently in a “keep meals simple and clean out the fridge/pantry” mode. We’re taking the train down to New York City this morning for a wedding and then will be flying to Birmingham for another wedding and then are visiting some friends in Atlanta before flying home. We’ve had a lot of travel lately – which can be tiring, but is also really great and I’m thankful we get to travel  – but man, I am ready for some slower summer days. The latter half of July + all of August and September are going to be just that and I’m really excited about it.

Back to food. Given the travel, we’ve been piecing meals together with what we have on hand or making super simple stuff. I hope this is helpful if you’re in a similar situation or need some inspiration for creating satisfying + satiating meals without meal planning. Remember, sometimes food is boring and unexciting and that is okay. That’s a normal part of being an intuitive eater. 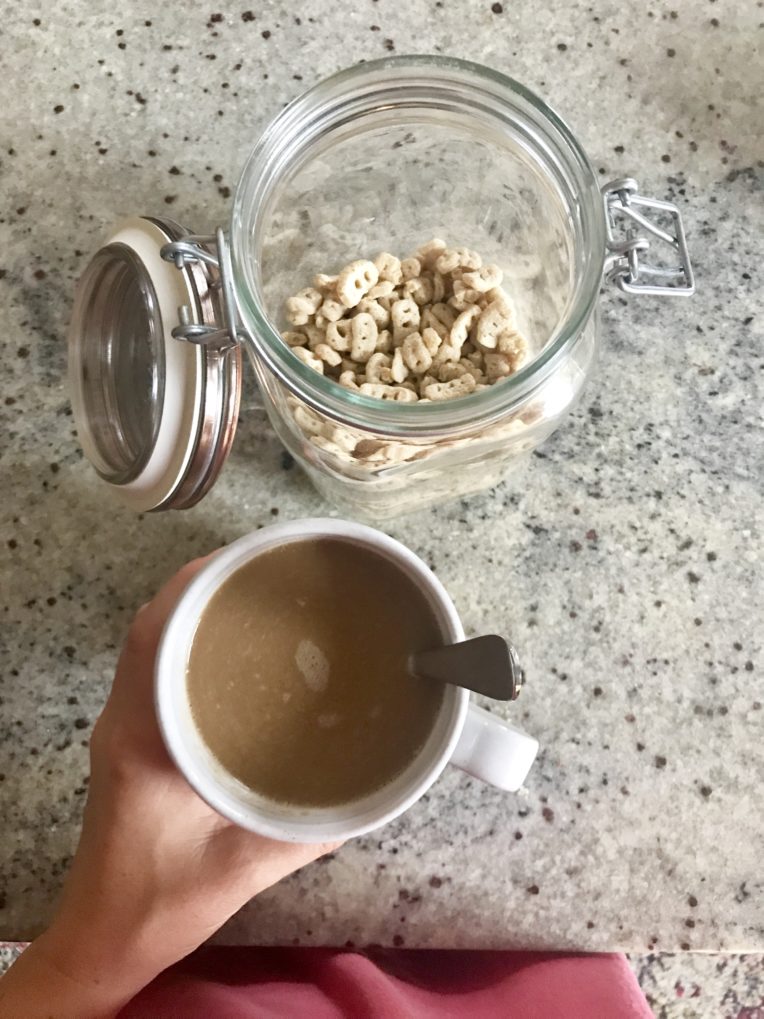 It’s getting warmer here now that we are into July and hot oatmeal is sounding less appealing (shocker after months of eating the same thing) so I switched it up and made oatmeal in pancake form. I used this super simple recipe and just blended everything up. Although beware, I found making the recipe as written resulted in a thinner than ideal batter that made really flat, flimsy pancakes. I added an extra 1/2ish cup of oats and that was perfect. 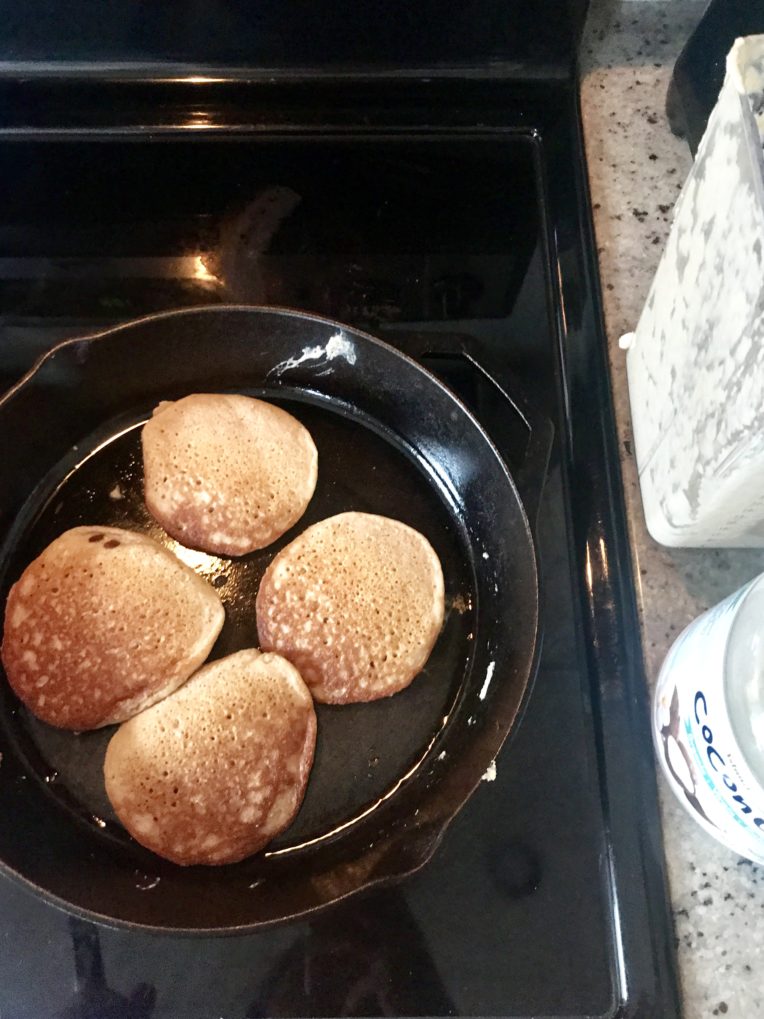 A couple of important things you should know: cook your pancakes in a little pool of coconut oil or butter. This happened by accident. I was using the cast iron (which totally intimidates me, btw) and knew I would need to grease ‘er up really really well in order for the pancakes to not stick. So I poured in some oil and swirled it around – I’d say it was ~1/8 inch deep? Then I cooked my pancakes and LET ME TELL YOU. It was like a crispy donut-esque pancake and I will forever be doing this. You can see in the above photo when you flip them the first side has soaked up mostly all the oil and it’s delicious.

When Cal outgrows this dairy allergy and/or we stop nursing down the road, I’ll be doing this with butter. I bet that’s even better. Second, always eat your pancakes with maple syrup. Except what I prefer to do is dip instead of have half my pancakes chilling in a pool of syrup getting all soggy and stuff. 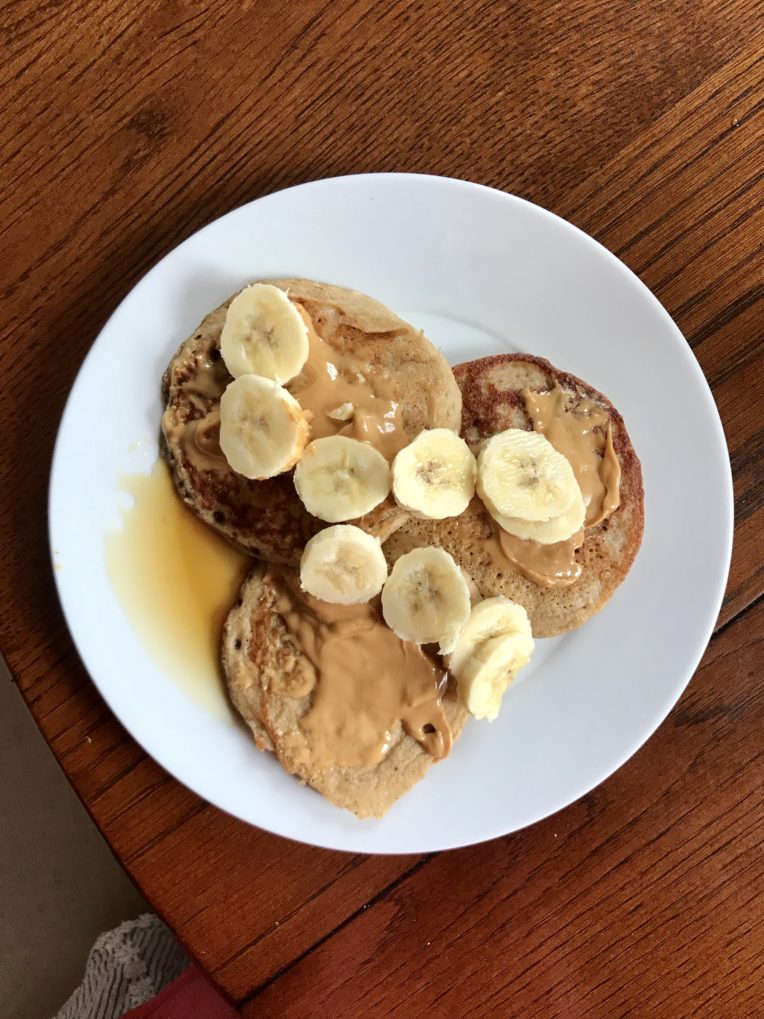 We had a busy morning and a little before noon I realized I was more hungry than I prefer so I snacked on carrots + hummus while throwing together lunch. I’m not a vegetable-kind-of-snack person but this hummus is absolutely blowing my mind right now and so I am a vegetable snack person right now because that’s the only dipper I had on hand. And it’s summer and this snack was refreshing. 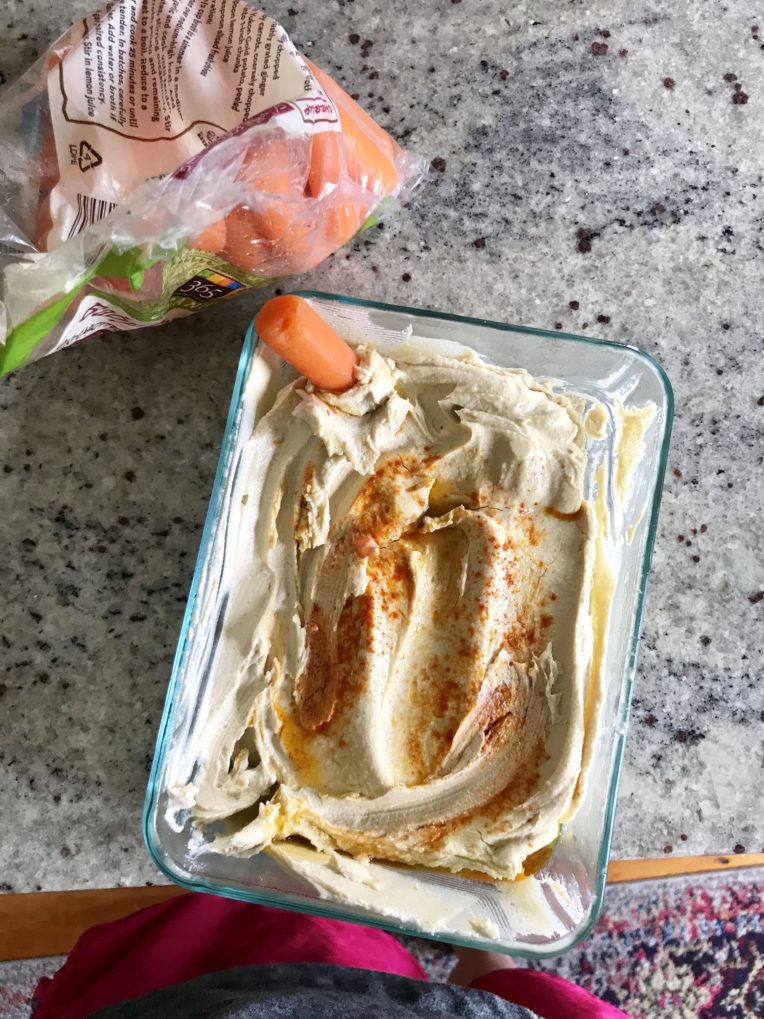 I didn’t want to cook anything for lunch this week so we ate sandwiches. But doesn’t summer just beg for a good turkey sandwich? I think so and if you don’t….leave a comment telling me why because I don’t understand. 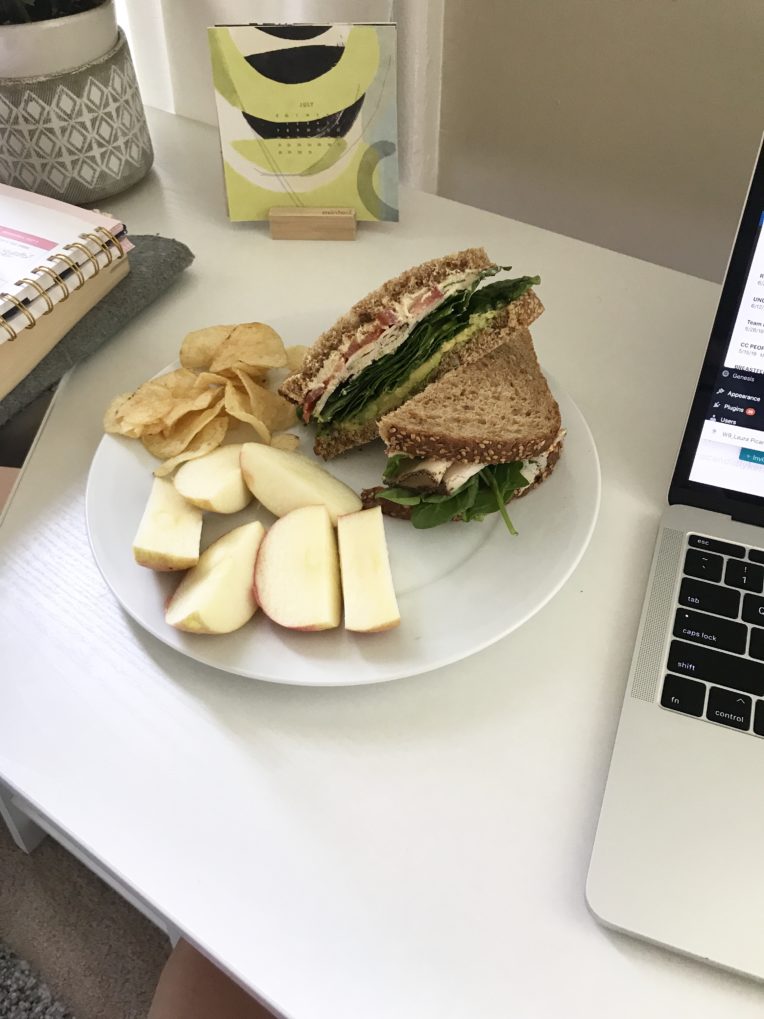 turkey + avocado + mind blowing hummus + spinach + tomato + s&p….eaten with an apple and good ole potato chips while I started typing up this post 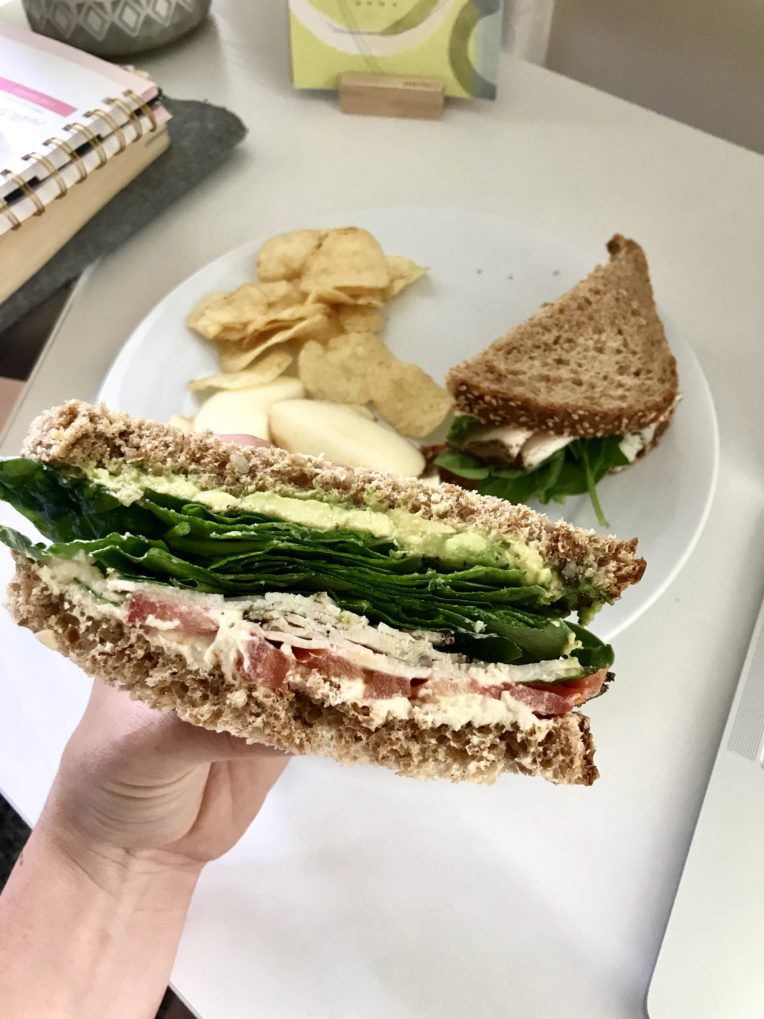 And then I ate a couple of these chocolate chip coconut no bake balls because I was still hungry. 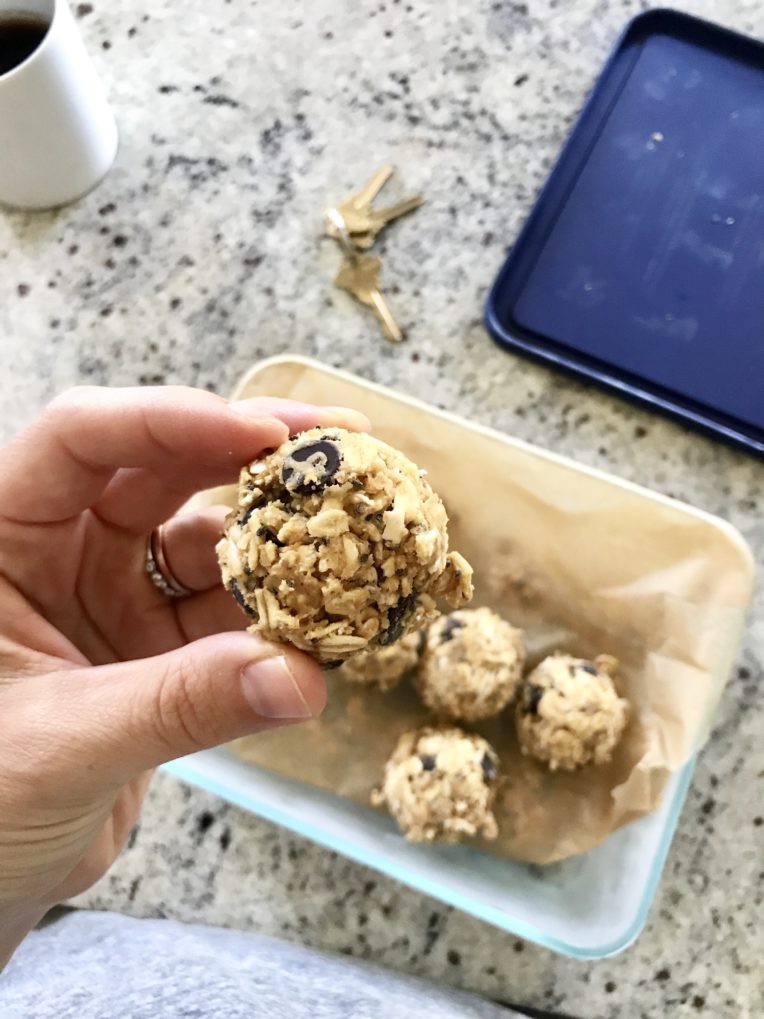 I snacked on anything that we had left in our pantry/fridge/freezer – it was hot yesterday and all I wanted was cold.

My go to lately: frozen berries + almond milk + chia seeds + hearty spoonful of almond or peanut butter + spinach if I have it – which we did and it was on its last leg. Then I forgot to take a picture but I put it on my IG stories so here’s a terrible screenshot lol. 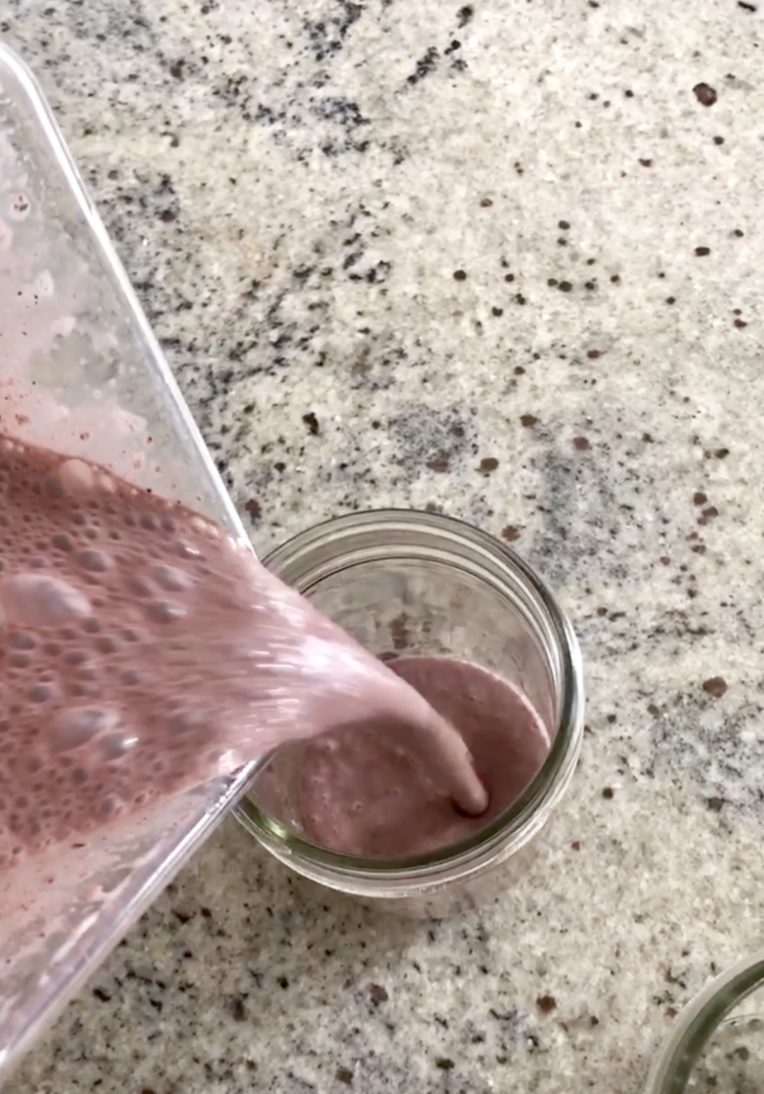 Dinner was pesto pasta. We had a chicken sausage in the freezer and a little pesto and spinach left in the fridge. I bought some broccoli at the beginning of the week to go with it. We sautéd up sausage, added spinach until it wilted and mixed that together with the pasta and pesto. I just roasted the broccoli in the oven with olive oil + s&p. Why is the pasta a weird orange color? I was sent some red lentil pasta that’s been hanging around forever and so we finally used it and that will be the last of that. It was gross. Gross, but edible so we still ate it. A shining example of when you eat food to simply get the job done but it’s not exciting. 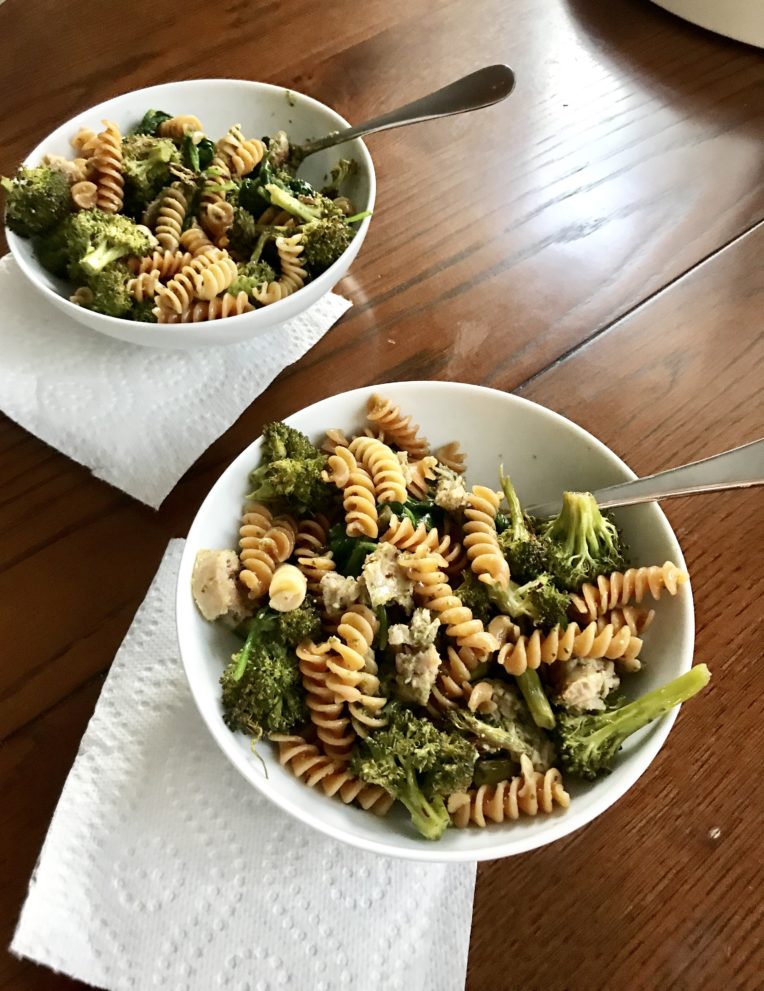 This bedtime snack made up for the crappy pasta. Cookies and ice cream you never disappoint. I just made the recipe on the back of the chocolate chip bag (TJs chocolate chips are dairy free if anyone is looking for a cheap df option) and used coconut oil instead of butter. And then I didn’t take a picture …again…and so imagine two cookies and some ice cream in a bowl. 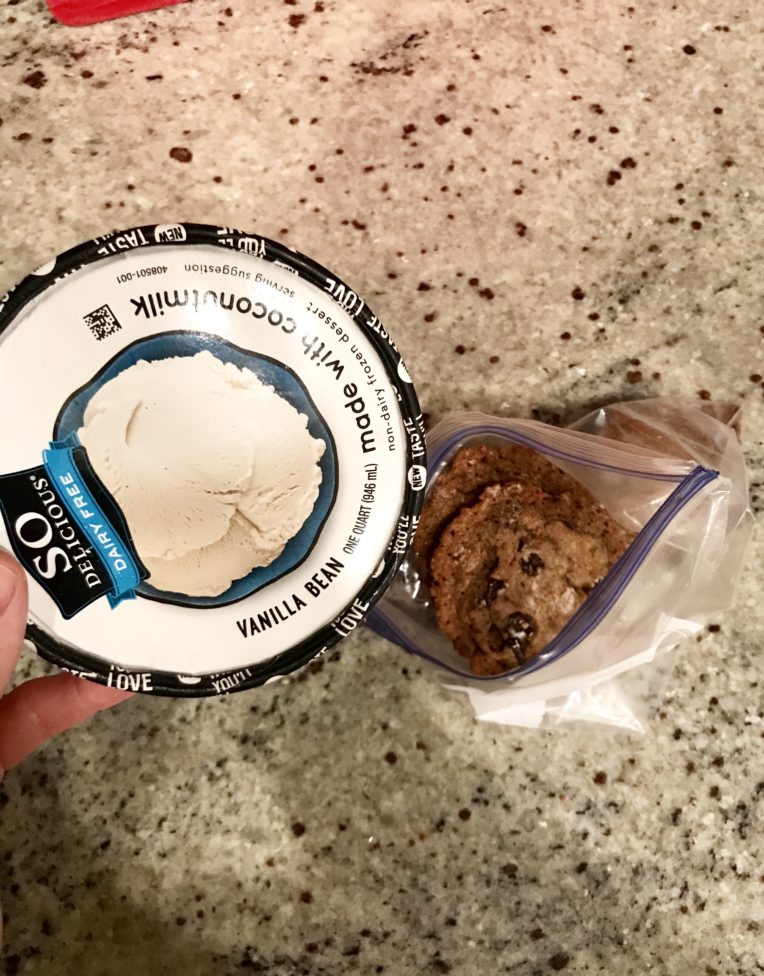 Tell me what you’re eating in the comments!