Many of you said seeing some of what we are eating lately would be helpful when I wrote this post about COVID-19 last week. My hope is that this post on intuitive eating during quarantine (and these kind of posts in general) provide some insight for you around “normal” eating (which will look different from person to person, so really there is no normal) and simply, overall meal inspiration. Maybe you’re like me and eating a lot of baked goods because that brightens up your day, baking gives you a fun/creative daily outlet while you’re at home all day, and something sweet just satisfies your soul right now. Maybe fresh produce is less abundant than it usually is. Maybe you’d rather eat something different than what you have available in your pantry/fridge/freezer right now. What intuitive eating looks like differs from day to day depending on your circumstances. So if you’re feeling wonky with food, remember that these times are teaching you flexibility with food and that’s a good thing. 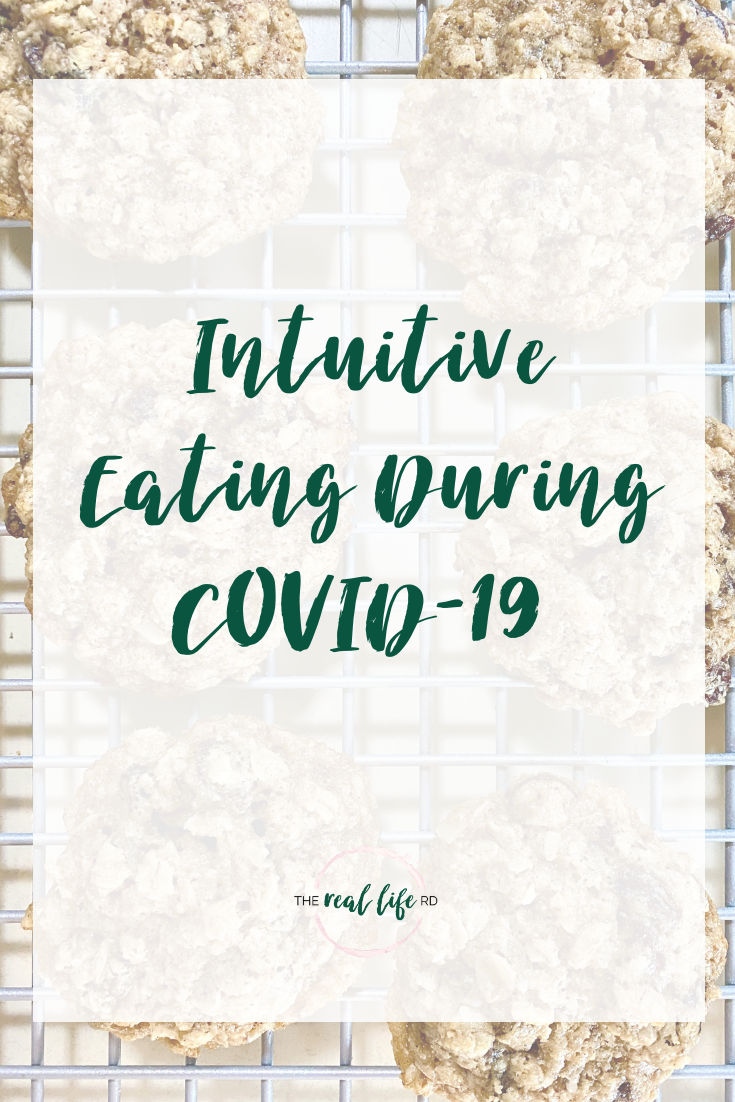 We’ve been staying with my in-laws or at my mom’s house for the past two weeks. Someone makes a grocery run every 10-14 days. Overall, food doesn’t feel that dissimilar to our normal, but working with what we have vs being able to swing by a local grocery and pick something up on my walk home has been different. In a lot of ways, I’m finding it relieving to just eat what we have and move on. Food feels simpler. I’m thankful we have food.

There is no order to the meals I’m going to share since it was a miracle for me to even remember to snap photos given I pretty much never takes photos of food anymore. So the fact that I have photos is a win lol. 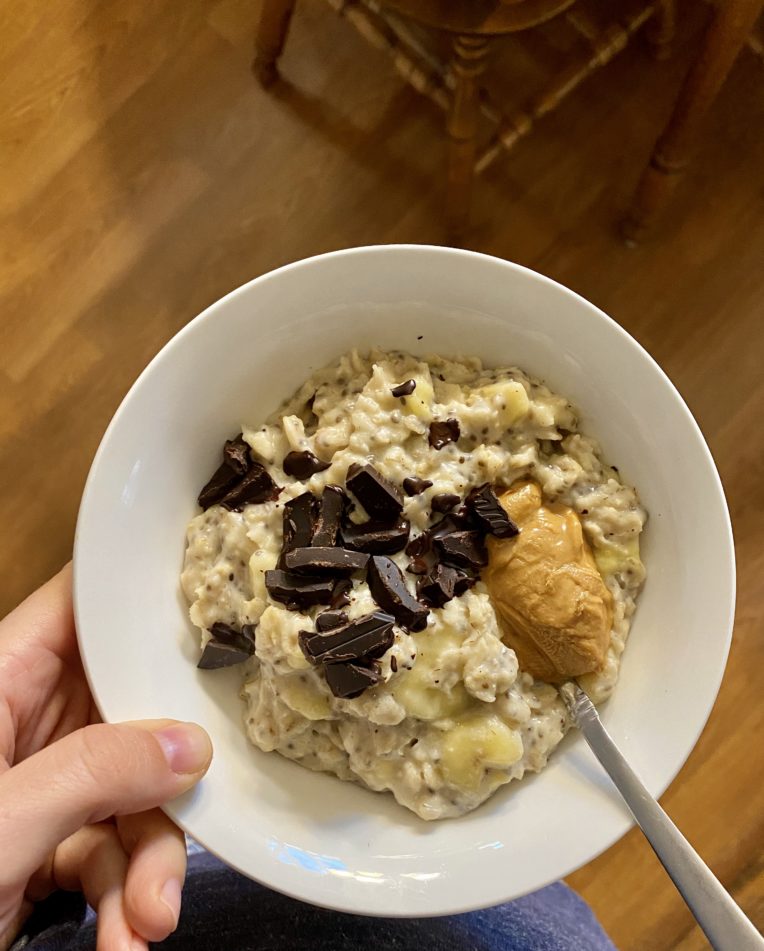 Breakfasts are pancakes, oatmeal or egg sandwiches. One morning (above) I made a big pot of banana oatmeal (rolled oats + Ripple milk + chia seeds + pinch of salt + banana stirred in at the end) and topped with a chocolate square and pb.

Below is a rendition of an egg sandwich I’ve been eating – sandwich roll with two fried eggs, bacon, non-diary cheese, spinach and hot sauce. Plus and unpictured orange. 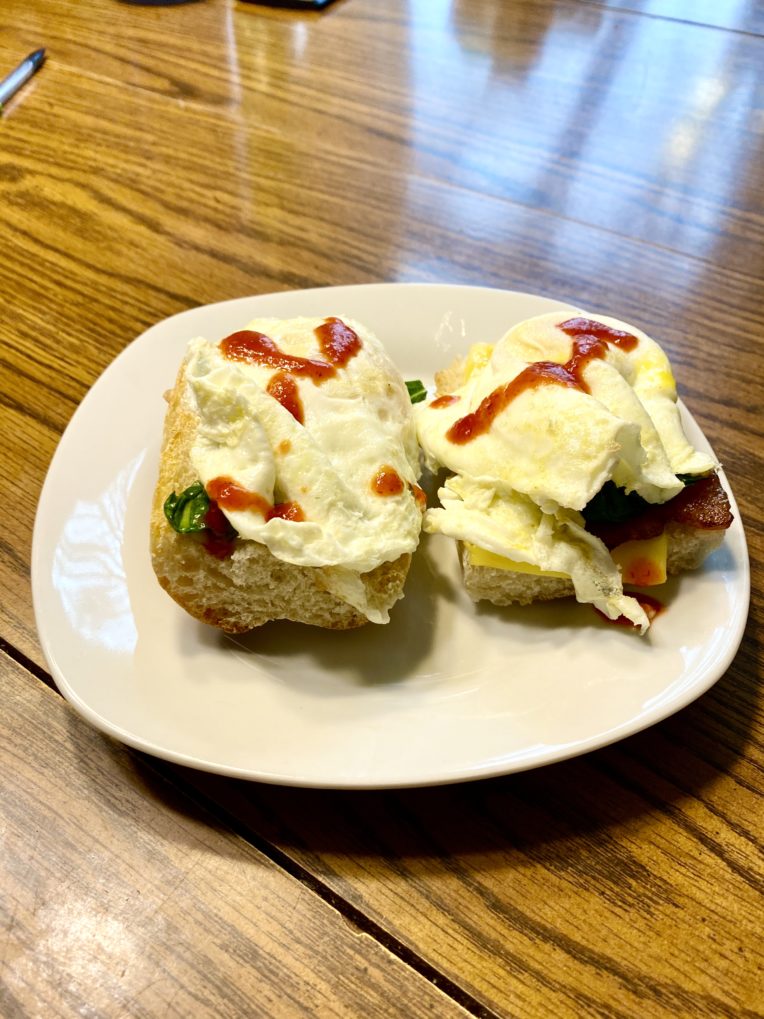 Lunch one day was 2 eggs scrambled with spinach and non-dairy cheese (I don’t love vegan cheese but my mom bought it and I don’t want it to go to waste!) + a big carrot + potato chips. I think I ate some fruit after this. 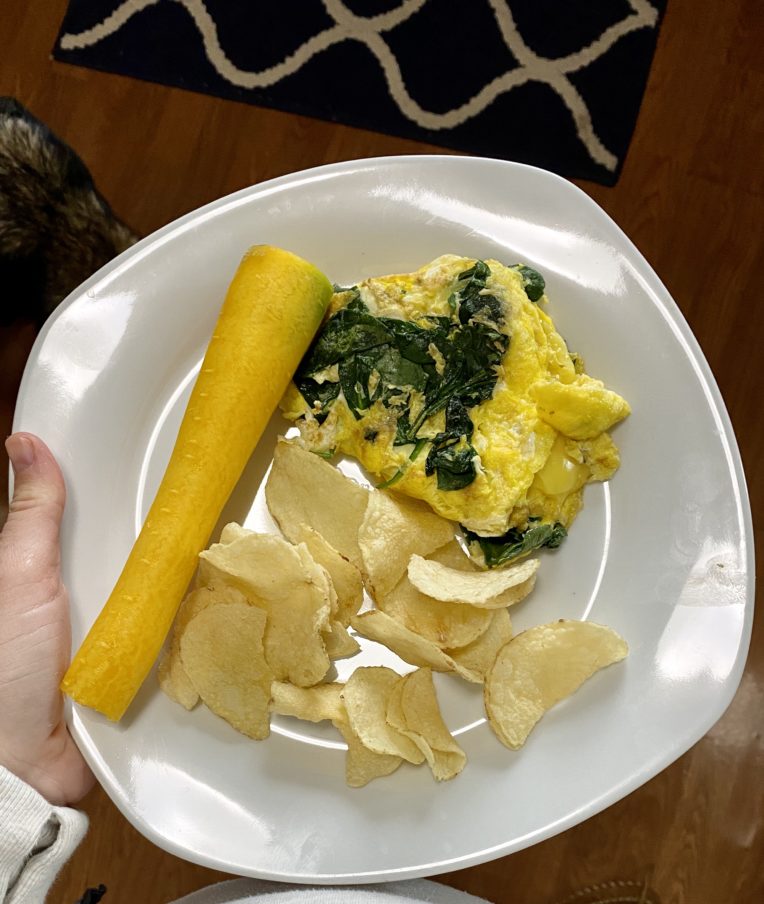 Another lunch – chicken salad my mom made on a sandwich roll with a carrot, pickle and potato chips. 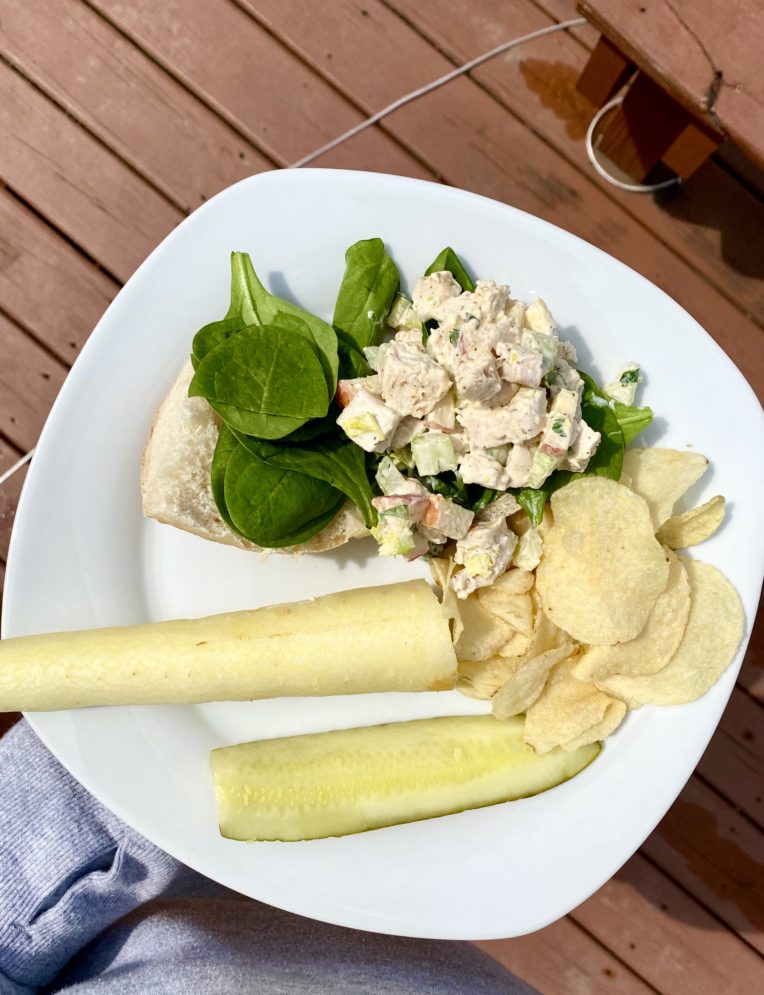 Dinner one night was veggie soup + focaccia my mom made. 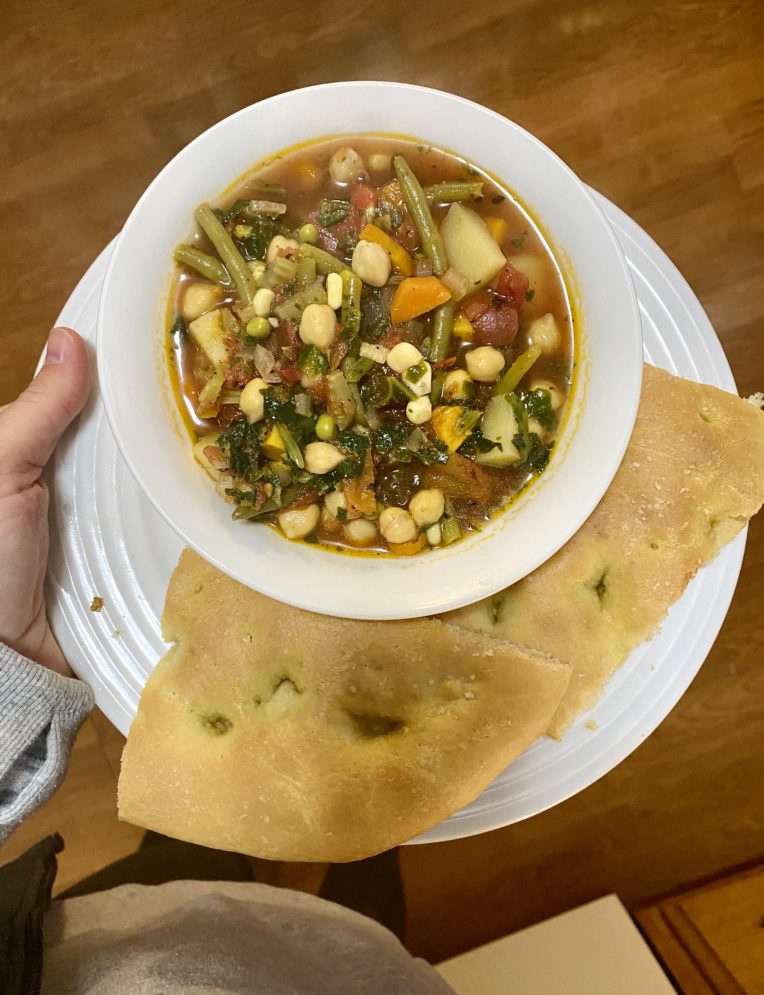 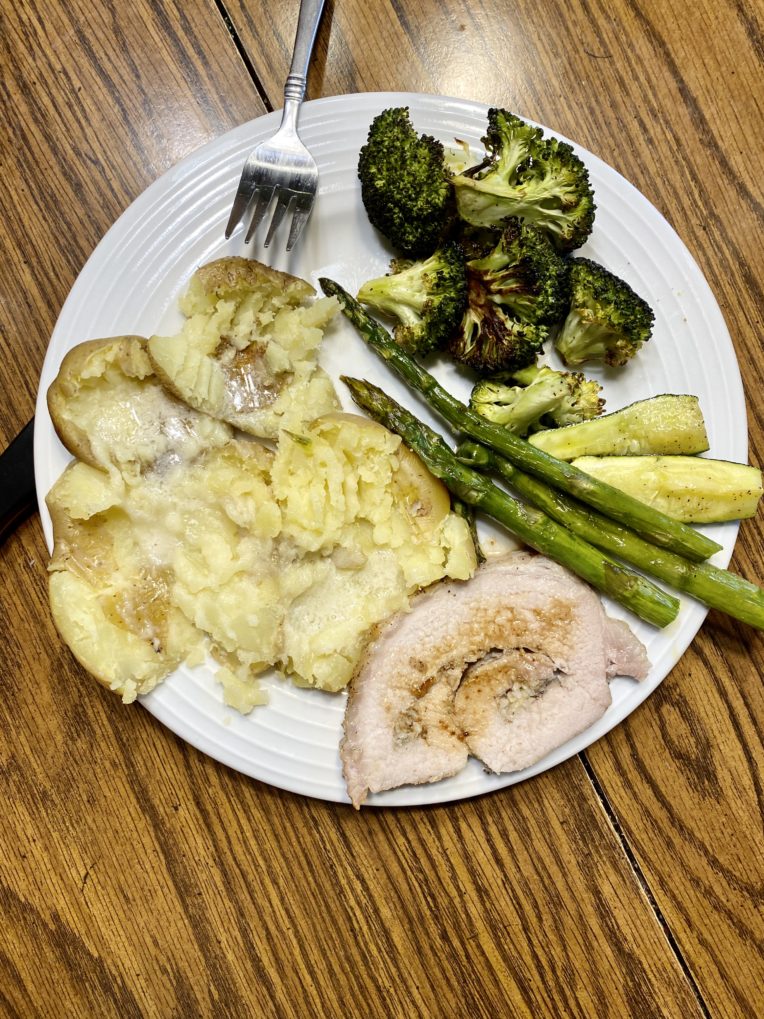 Last night we had homemade chicken fingers (every time I’m with my mom I request these!) with sp fries + sautéed cabbage that needed to be used up. She breads the chicken in flour + egg and then panko and says she seasons the chicken and flour mixture heavily with salt + pepper. Then pan fries in whatever oil. Sometimes canola or if we have it, avocado oil. I ate this plate plus a couple more nugs and sp fries. 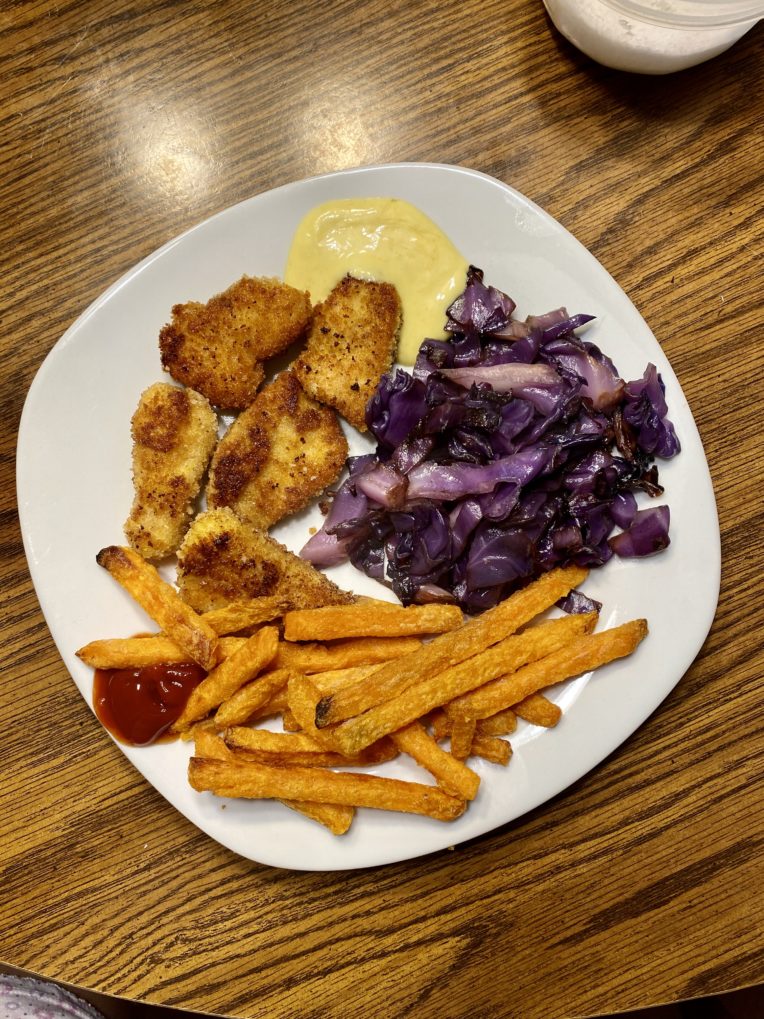 I’ve been snacking on crackers, fruit and these copycat reese’s eggs that are SO GOOD. Woah. Making these year round. I followed this recipe loosely and used 1/2 cup almond meal instead of coconut flour and TJs chocolate chips that I melted for the chocolate coating. 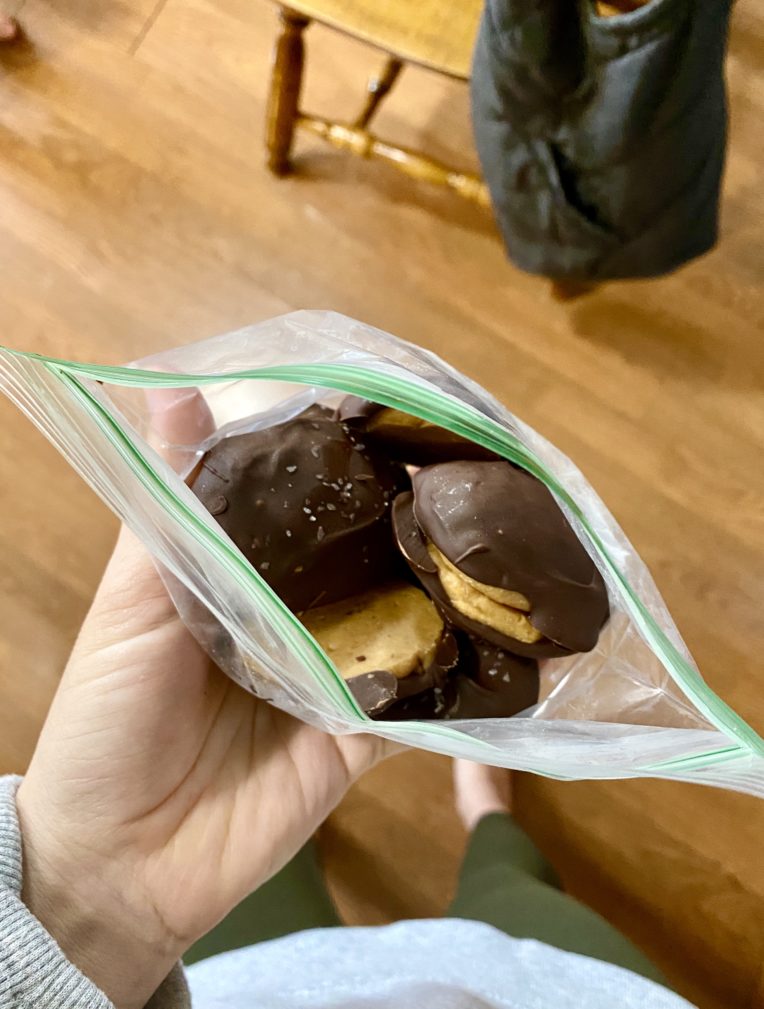 We also made a batch of oatmeal raisin cookies on Sunday using this recipe (except I used ap flour instead of oat and brown sugar instead of coconut sugar since that what we had on hand) and I’ve been eating a couple of those for an afternoon snacks. 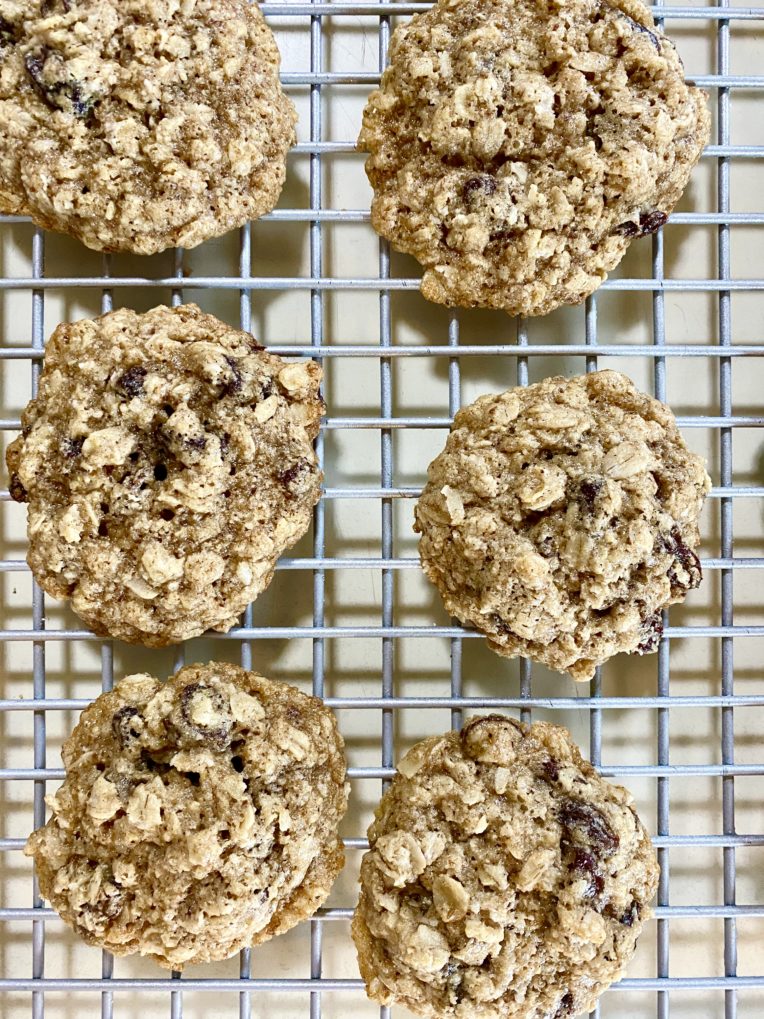 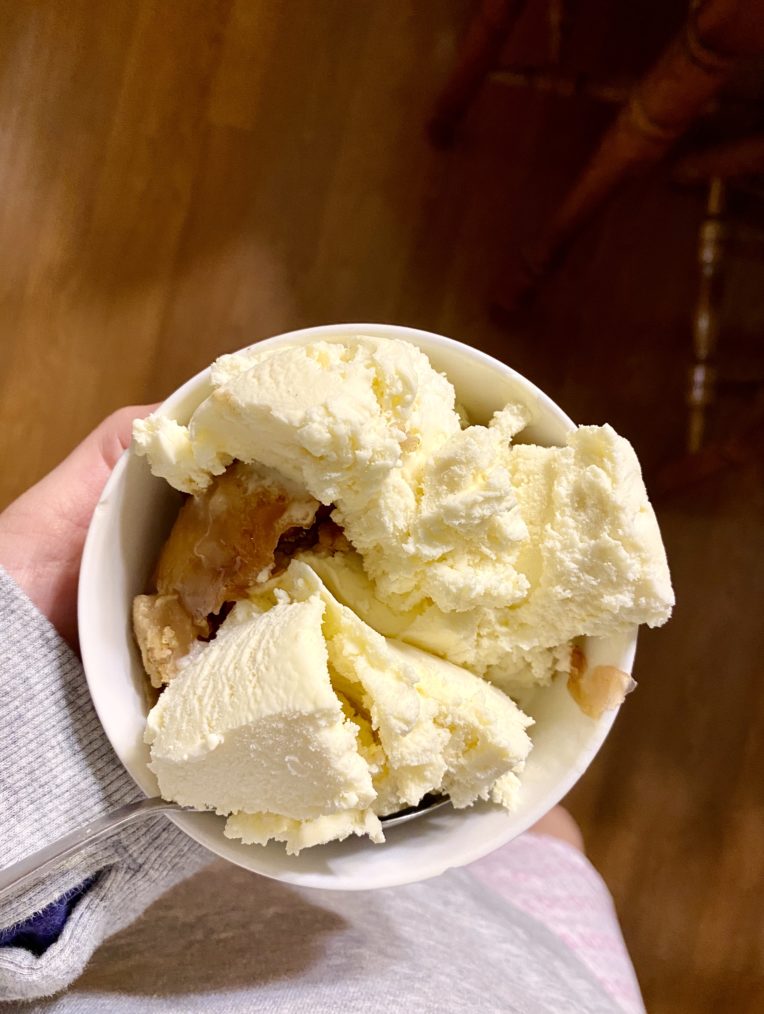 What Cal is Eating

For Nick & I, we decided early on in our parenting that we wanted to raise Cal to be an intuitive eater the best we knew how so we’ve been feeding him with the support of resources like Born to Eat, Ellyn Satter and the IG account @feedinglittles. I am nowhere near perfect at this. I would like to get better at less snacking on the go, but it’s more fun/easier to have him eat a snack outside after his nap or in the stroller on our way somewhere than spend another 15 minutes at the kitchen table 2-3x a day. Right now, I don’t feel like less snacks eaten at the table is preventing him from being able to sit and participate at family meals (I mean, for as much as a 15 month old can sit still) so I don’t have that much motivation to change up the snacking situation…

He is still nursing 1-3x a day or sometimes he drinks Ripple pea milk which I’ve found to have a similar nutrition profile to cow’s milk – I might try to trial dairy back in and see if he’s growing out of this protein allergy around 18 months. But after the 3 months of hellish sleep we went through when we introduced dairy again around 12 months before realizing he was likely up 5-6x a night screaming due to GI pain, I’m too nervous to rock the boat again. He’s sleeping 9-11 hrs straight about 70% of the time which for us, is huge. But I am really hoping he grows out of it.

Also, I want to preface sharing his meals by saying his eating habits change from week to week. A couple weeks ago there were many days (weeks even?) when he would eat only a handful of bites at lunch/dinner and a night or two where he straight up ate nothing for dinner. Lately, he must be in a growth spurt or something because his appetite is 3x what it was a couple weeks ago. I have to continually remind myself that I can trust his own innate ability to feed himself. He knows how much food he needs at any given time. My role (per Ellyn Satter’s Division of Responsibility) is to provide what he eats, where he eats and when he eats and to cultivate a positive food environment.

It is a conscious effort for me to stay neutral with facial expressions, tone of voice and emotions at meals regarding what he eats and how much and not get worried when he eats next to nothing at dinner because my brain goes to, “he is going to sleep like crap because he’s going to wake up hungry.” Or if he eats a lot of food and tries new foods at meals I find it hard to hold back excitement. So, this is a continual learning journey for me.

If I’m introducing a new food or two, my goal is for the other 2/3 of his plate to be foods I know he loves and enjoys. Sometimes he doesn’t even touch the new food, sometimes he explores it with his hands and maybe takes a few bites and sometimes he eats it all. It’s a total toss up. 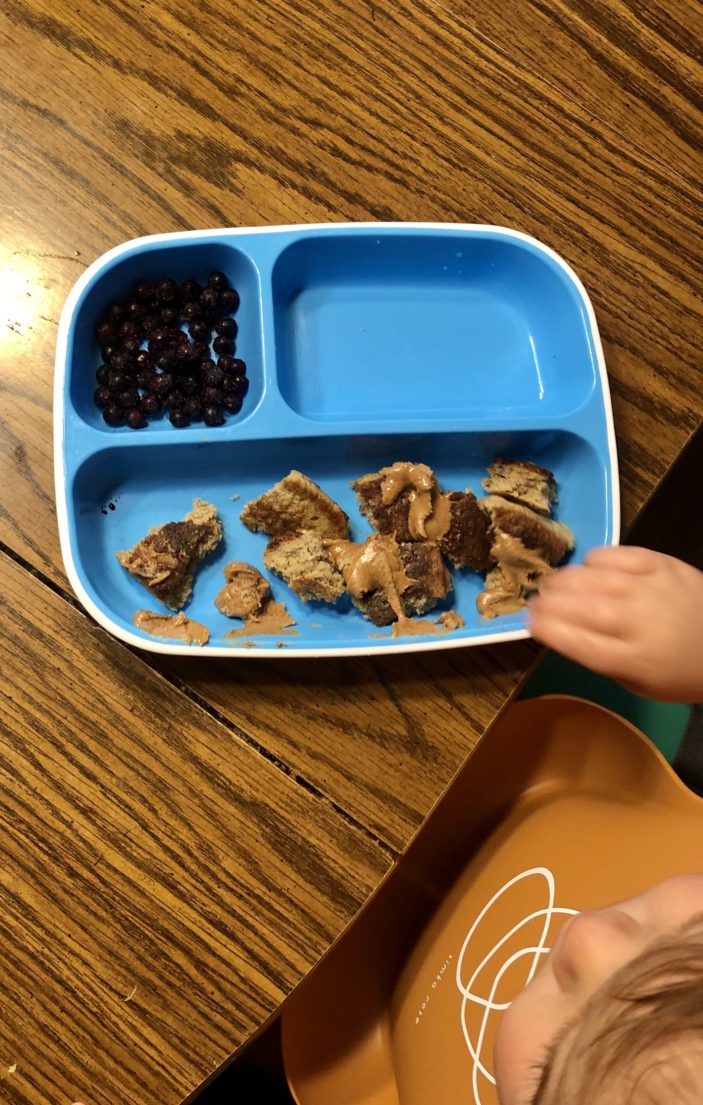 Breakfast is a rotation of oatmeal with some sort of fruit and nut butter or pancakes. We make a lot of oatmeal banana blender pancakes. Last week we made french toast with my sister-in-laws homemade sourdough and he loved that too. He is very much not into eggs right now, but in french toast form he was very into it. 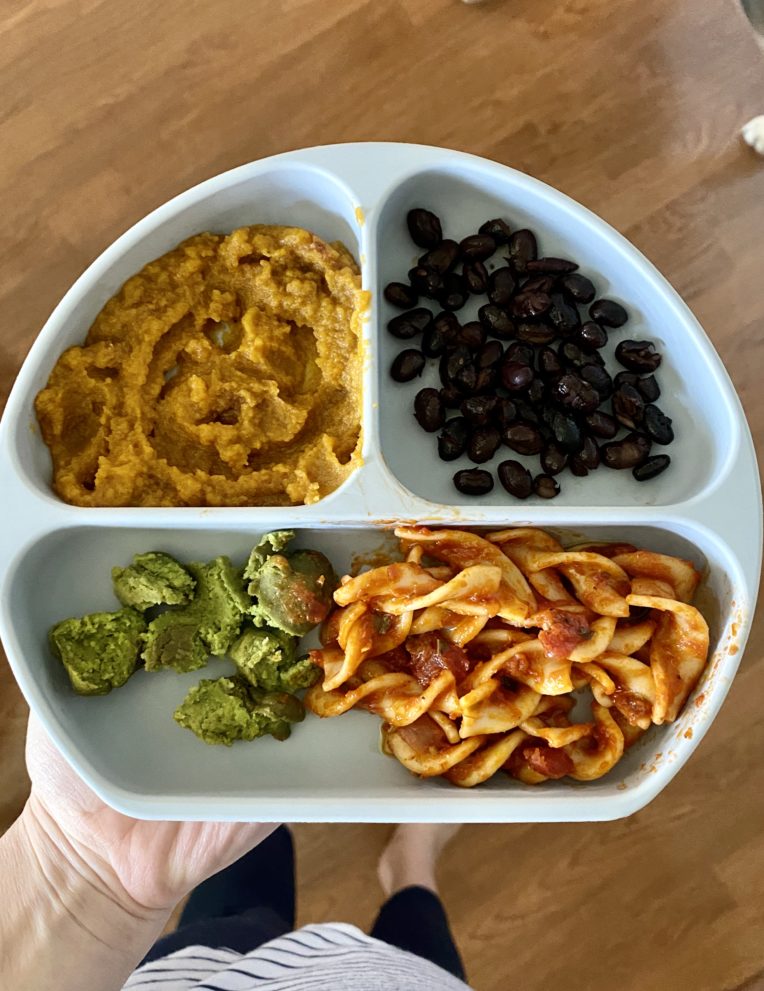 This dinner was canned pureed pumpkin (he is obsessed with canned pumpkin and has been for months so he eats that at like 75% of lunches and dinners) with coconut oil and cinnamon mixed in, black beans, egg noodles with marinara and one of these spinach/chickpea/banana muffins. He ate this plate, but 1/2 of the noodles, a bite of the black beans and then another serving of pumpkin and muffin. 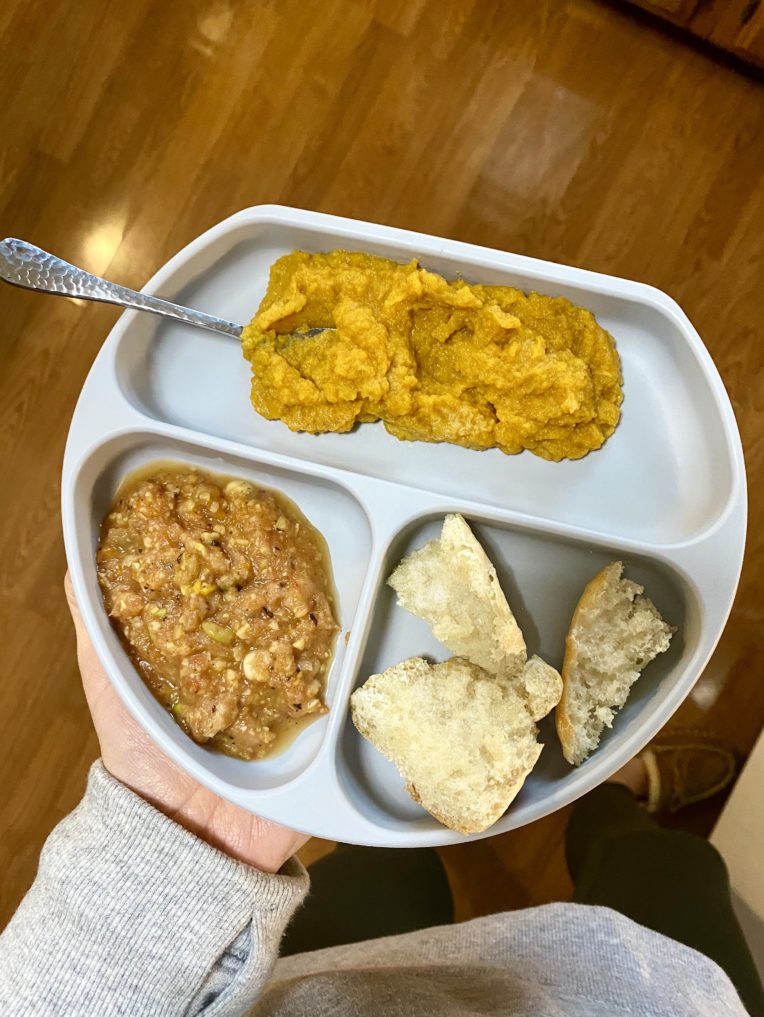 Another dinner was chickpea vegetable soup my mom made that I pureed a bit since he isn’t into vegetable textures right now so I mashed it up and introduced it that way and he ate a few bites. Plus more pumpkin with cinnamon & coconut oil and some buttered roll. He ate all the roll, 3/4 of the pumpkin and a few bites of soup. 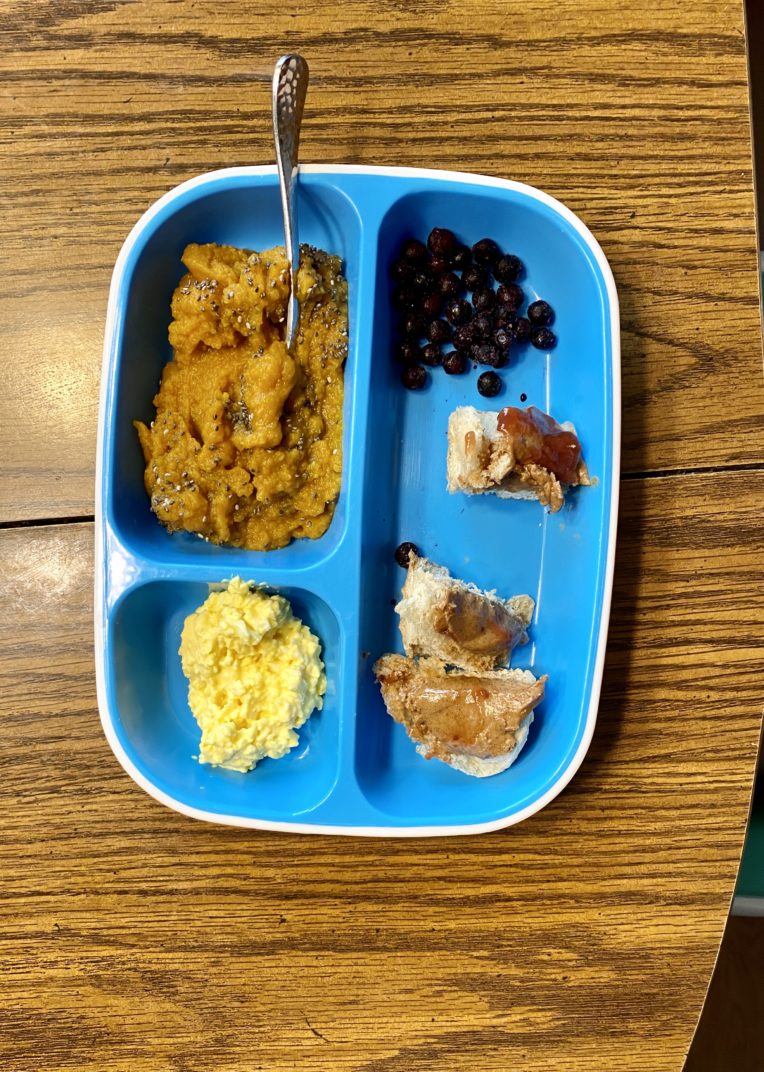 This lunch was cold pumpkin with chia seeds, black beans, egg salad and almond butter + jelly on a sandwich roll. My brother and sister-in-law are awesome bread bakers so we are spoiled with lots of fresh bread while home. It’s awesome. He ate this whole plate, the other half of ab + j and another serving of egg salad. He was still hungry and asking for more after that so I gave him two black bean brownies topped with almond butter.

Again, this is a significant increase in his normal appetite from his usual so if you’re like, “my toddler eats nowhere near that!” that is OKAY. Sometimes Cal doesn’t either. We can trust their appetites.

My mom made & fed him lunch one afternoon while I napped and he ate half a pb & j on whole wheat that was “thickly slathered with pb” according to Mimi lol + a navel orange. I don’t have a picture to show you, but you get the point. 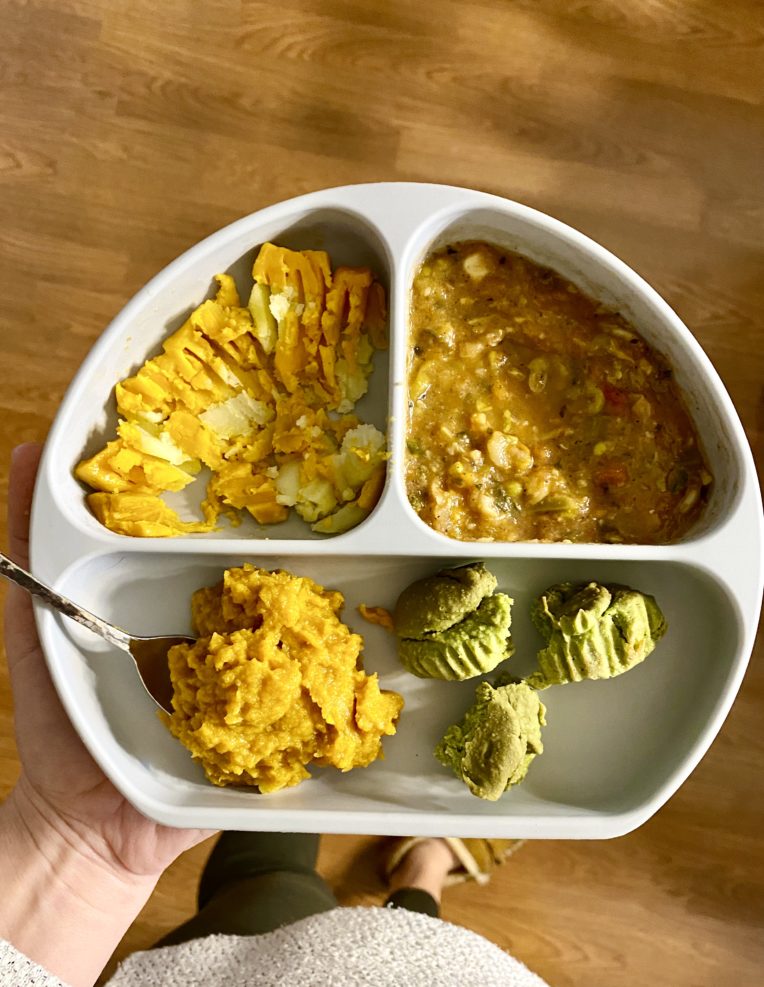 Another dinner was mashed potatoes (regular and sweet) with olive oil, pureed veggie + chickpea soup, the last bit of leftover pumpkin/coconut oil/cinnamon and a spinach chickpea muffin. He ate all of this except for 1/2 the potatoes and then asked for two more servings of soup.

He’s been loving these peanut butter puffs my mom bought (they are Popchips brand I think) along with lots of strawberries. 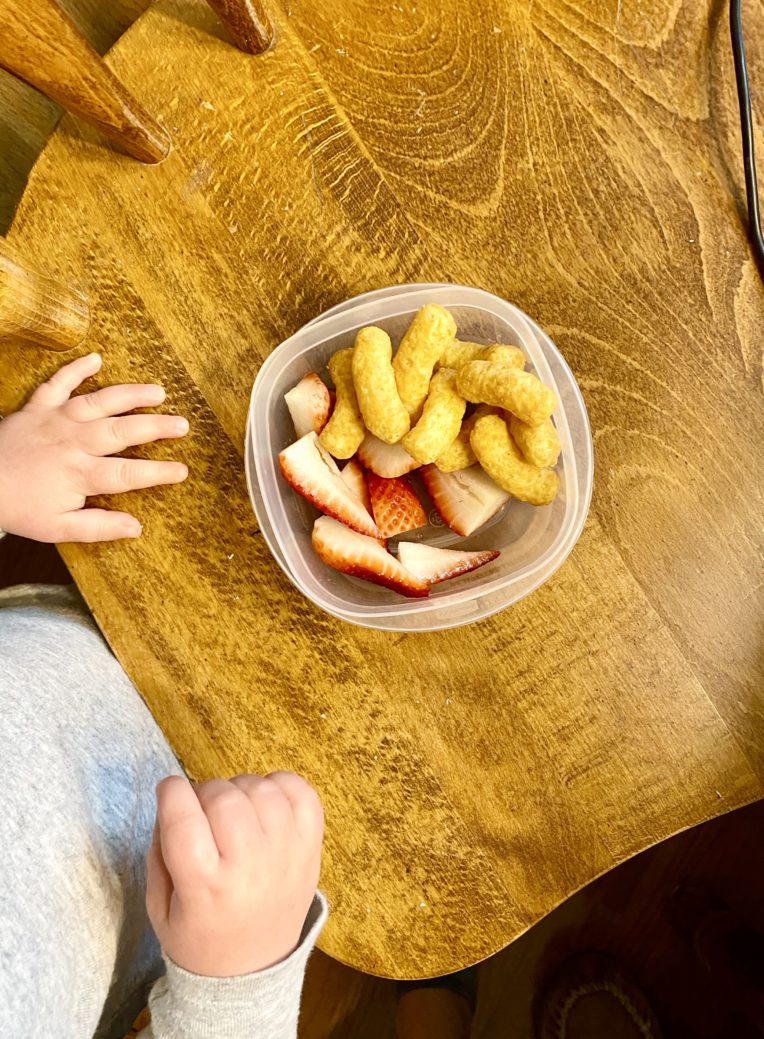 Almost every morning he also snacks on a few cheerios while I drink coffee and attempt to read the bible before we eat breakfast. He also loves the Siggi’s non-dairy yogurt for snacks (I think all non-dairy yogurt is so gross, but Siggi’s has somehow mastered a non dairy yogurt that takes like regular Greek yogurt) and those spinach/chickpea muffins, dried mango, Rx bars or the black bean brownies.

Cal has never really been into meat no matter how much I offer it. Although last week at my in-laws he LOVED spaghetti sauce with ground turkey that we had made so I’m going to make more of that again when we have the ingredients. And I’ll just try changing up with texture/presentation and keep offering.

And that’s what we’re eating! Share your thoughts & favorite eats in the comments!