In the comments, I’ve seen multiple requests for more of these “behind the scenes” of intuitive eating posts – ask and you shall receive! I’ll try to do these once a month going forward. These posts certainly don’t illustrate what you should eat, everyone is different. Rather, I hope reading the thoughts that go into a food decision helps in your own intuitive eating journey as you navigate learning to nourish yourself based on internal vs external cues.

In the beginning of your intuitive eating journey, it can feel like you’re hyper focusing on food choices. And it can feel really murky and grey – like you’re walking around in a dark room. If that sounds familiar, you’re in a good place 🙂 As you learn new skills and learn your body more, the decision making shifts and becomes more subconscious and intuitive. Wherever you are, even if you’re wresting with the idea of intuitive eating, know that you are right where you need to be. 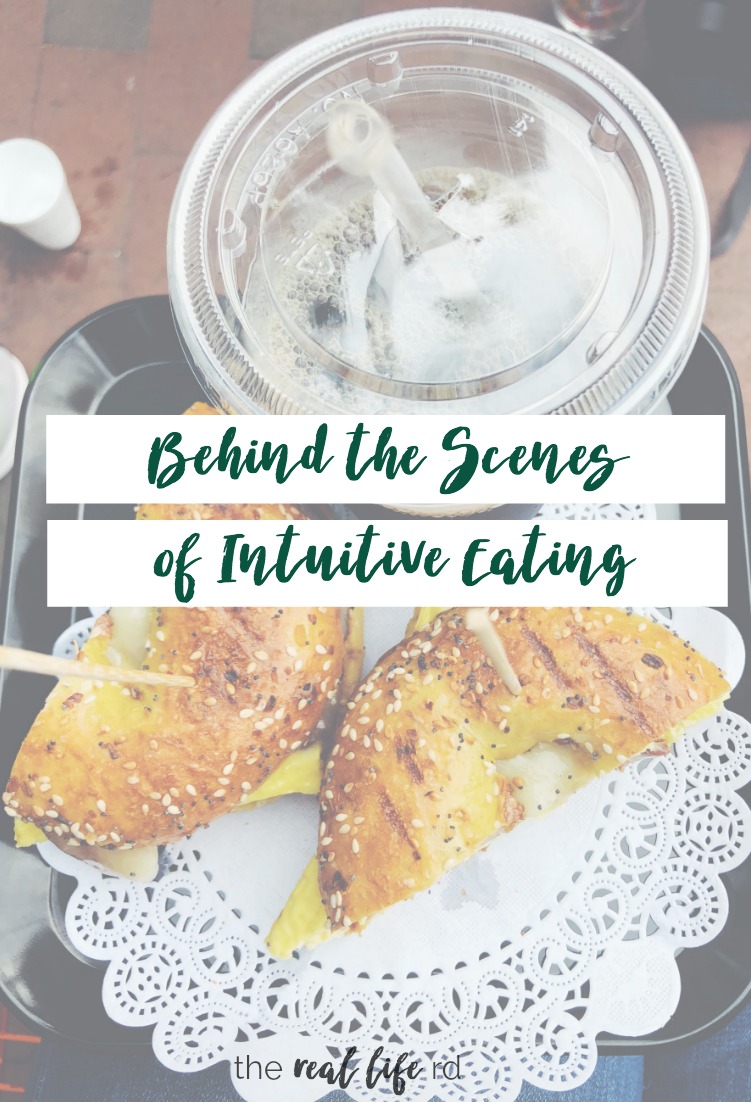 The meals/snacks I’m showing you in this post are from Monday. On Sunday I spent an hour baking up some snack things because I was sick of eating granola bars and pretzels and peanut butter for snacks. So I made some granola (using almond, walnuts and coconut as mix ins) chocolate chip almond butter cookies and banana bread muffin tops. I ate some of each of those on Monday and it was so much more satisfying. Sometimes granola bars are really satisfying for me, but after eating them a lot they lose their luster.

I went to bed Sunday night, knowing I wanted granola for breakfast so that was a given. I also had more clients than I ever see in one day on Monday starting at 7am, but I’m working two days at my NP job so we had to condense scheduling – given that,  breakfast had to be quick. And lastly, I was planning on exercising mid morning when I had an hour gap in between clients because it was so nice out in the morning so I didn’t want to get too full. I thought having a slightly smaller breakfast and then a bigger mid morning snack would work better for me. I think this is a good example of bridging some mind knowledge with body knowledge. It was warm out so a no-cook, cool and creamy breakfast sounded good. 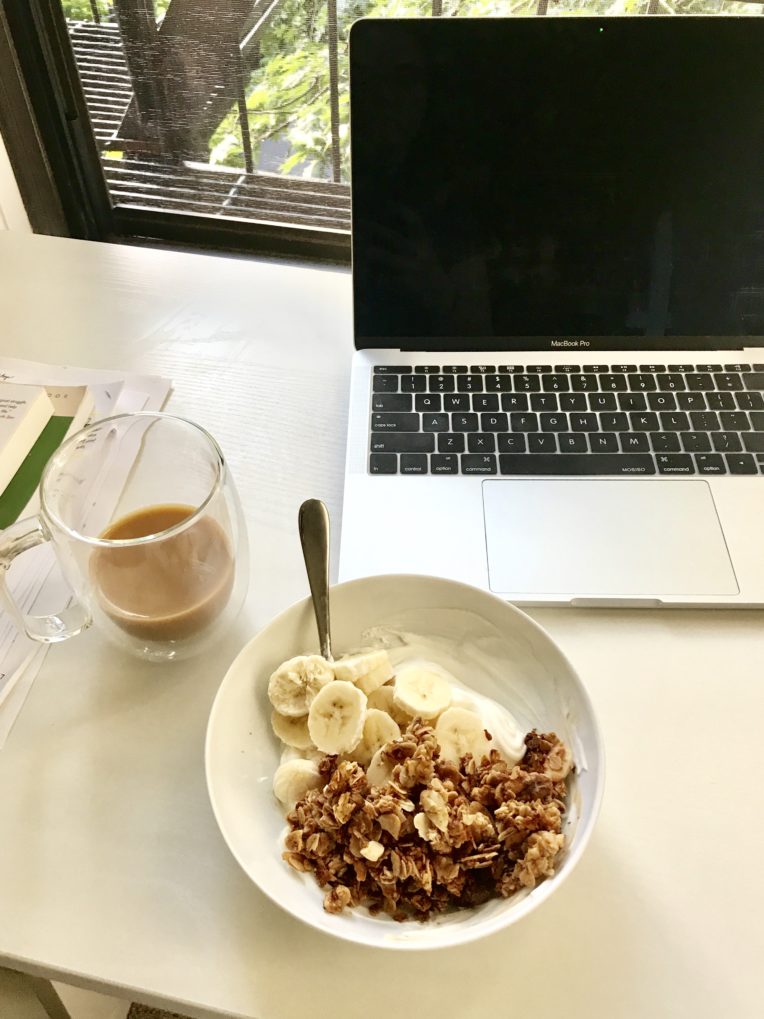 The granola has nuts and lots of coconut oil and shredded coconut so that provides fats + carbs. Whole milk yogurt = fat + protein. Banana = carbs and vitamins. And coffee with half and half, always. I was probably like a 6 to a 6 1/2 on the hunger/fullness scale after this meal. Full but not a “meal full” which was the goal since I was going to be moving my body soon after.

I had a few clients, got in some movement, showered and then had a hearty snack before my next client.

Because I had just baked, I knew I wanted a banana bread muffin top and something cold and crunchy to go along with it. I had eaten sweet things up until this point so a savory snack sounded good to eat with the muffin. I’d say these muffin tops are as filling as a Larabar – not super filling, but enough to hold me for an hour or two in between meals. I had about 2 1/2 hours before a lunch date with one of my interns, Hannah, so I grabbed a few honey almonds and then ate carrots + hummus for savory, cool crunch. 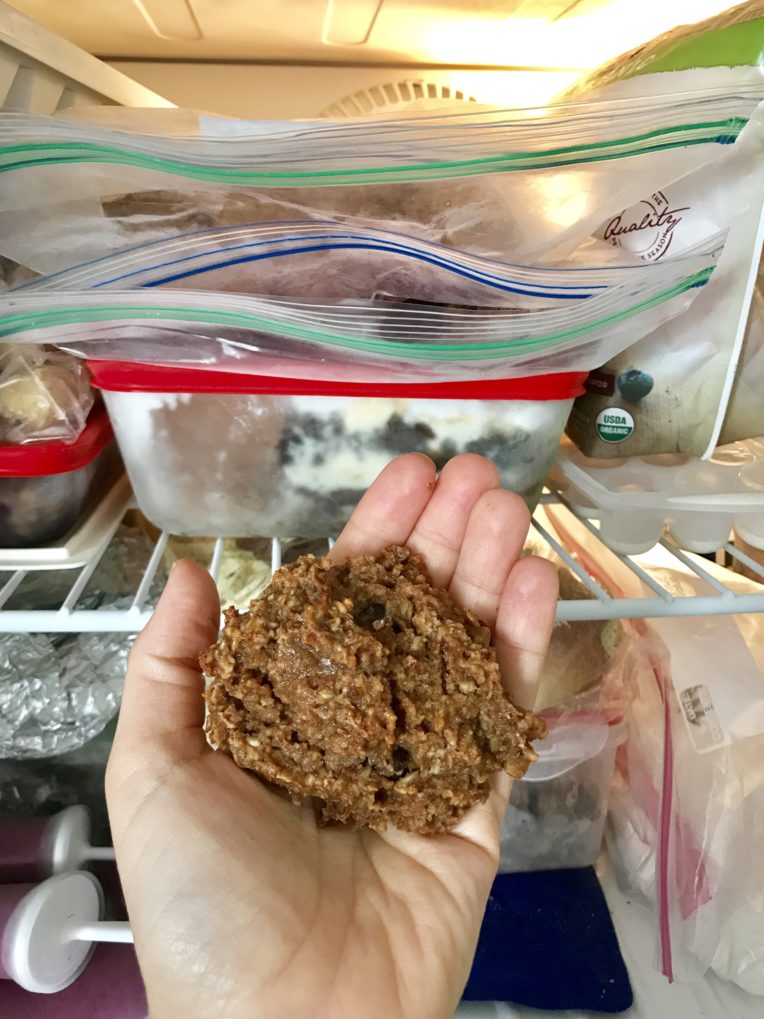 Muffin = carbs and fats. Carrots + hummus = vitamins and a little bit of fat and carb. Unless you’re eating a TON of hummus, I tend to think of hummus as primarily a fat source vs protein source since tahini and olive oil contributes more to the macronutrient profile than chickpeas. I went through a phase where carrots just didn’t do it for me, but now that it’s summer, cold carrots with cool and creamy hummus have been back in rotation and I’m into it. I also filled up a tumbler (I found them on Amazon for cheap and love them even though they are huge) with a mix of half iced tea and half lemonade –> favorite summer drink lately. 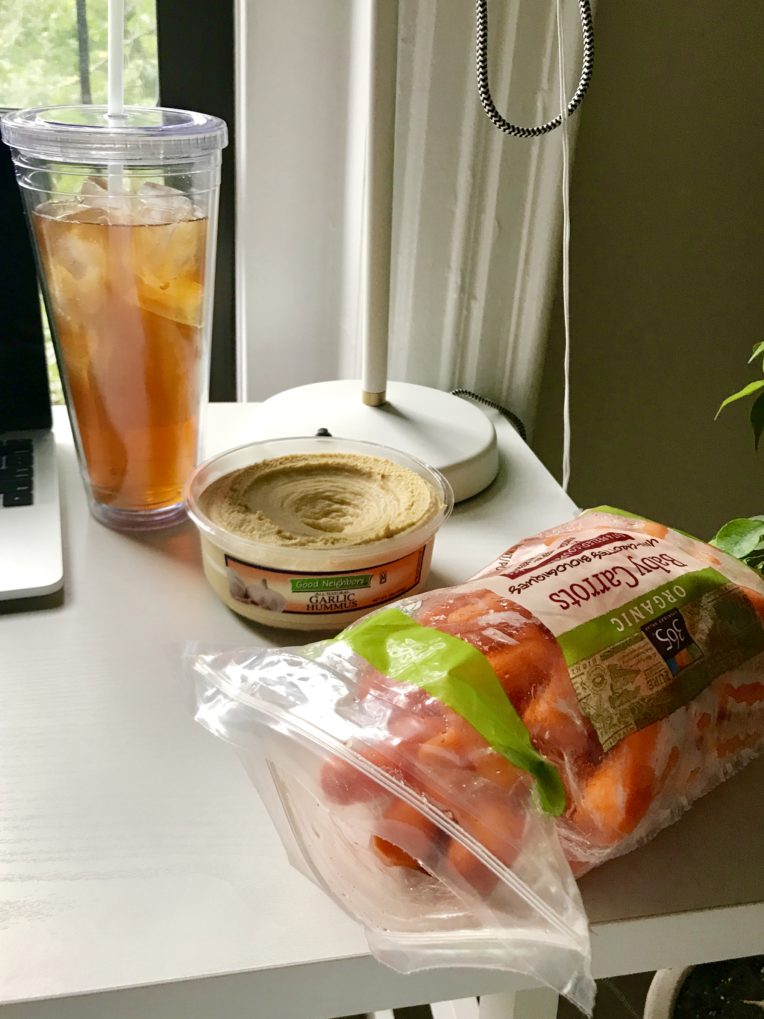 I wrapped up my morning clients and headed to Dig Inn for lunch with Hannah! The weather was gorgeous so we sat outside. I ordered greens + brown rice as a base and then sautéed kale with onions because I was in the mood for hot sides vs cold sides (even though it was sunny it was actually cool and breezy out by yesterday afternoon) and their kale is tasty. I was craving more carbs for lunch so went with sweet potatoes as my second side. I went back and forth between meatballs or salmon for protein, but salmon won out simply because I never buy salmon at the grocery because it doesn’t last all week for leftovers and it’s $$ so I decided to mix it up and get salmon since we eat ground beef often. 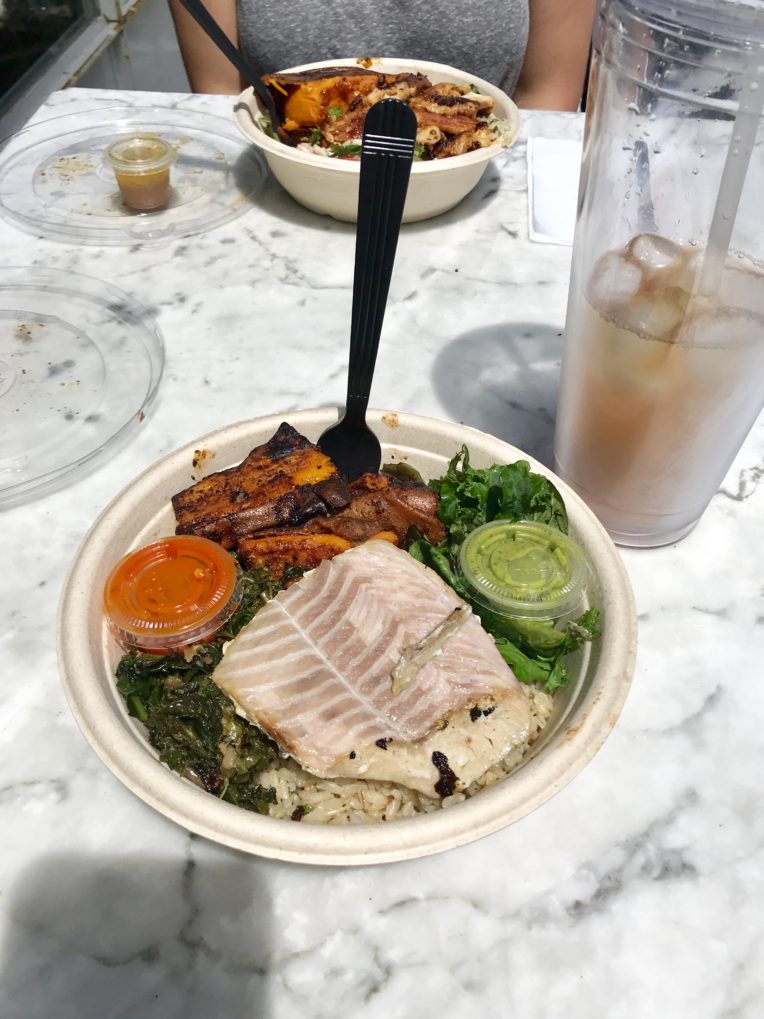 As I walked to lunch I realized that I didn’t bring any afternoon snacks with me (that never happens!) and I was going to be out for the afternoon seeing a client and doing some work before getting home. Knowing this I intentionally ate until a little past comfortable fullness. Coupled with the hefty serving of sautéed kale (a lot of kale sometimes means some bloat) I felt a little uncomfortable after this meal, but I knew that feeling would pass and I would get hungry again. Looking back I think it was more veggie bloat/fullness (which is normal when you eat this much fiber in one meal) because that full feeling subsided within 45 minutes and I was hungry for a snack within 3 1/2 hours.

I got home 30 minute later after hunger hit and had an almond butter cookie from the freezer because I just baked them and that sounded tasty + a big handful of grapes. Dinner was in less than 2 hours so I needed something to tide me over but not keep me full for too long. The cookie has a good bit of fats so I knew that would be satiating and the grapes just sounded refreshing. 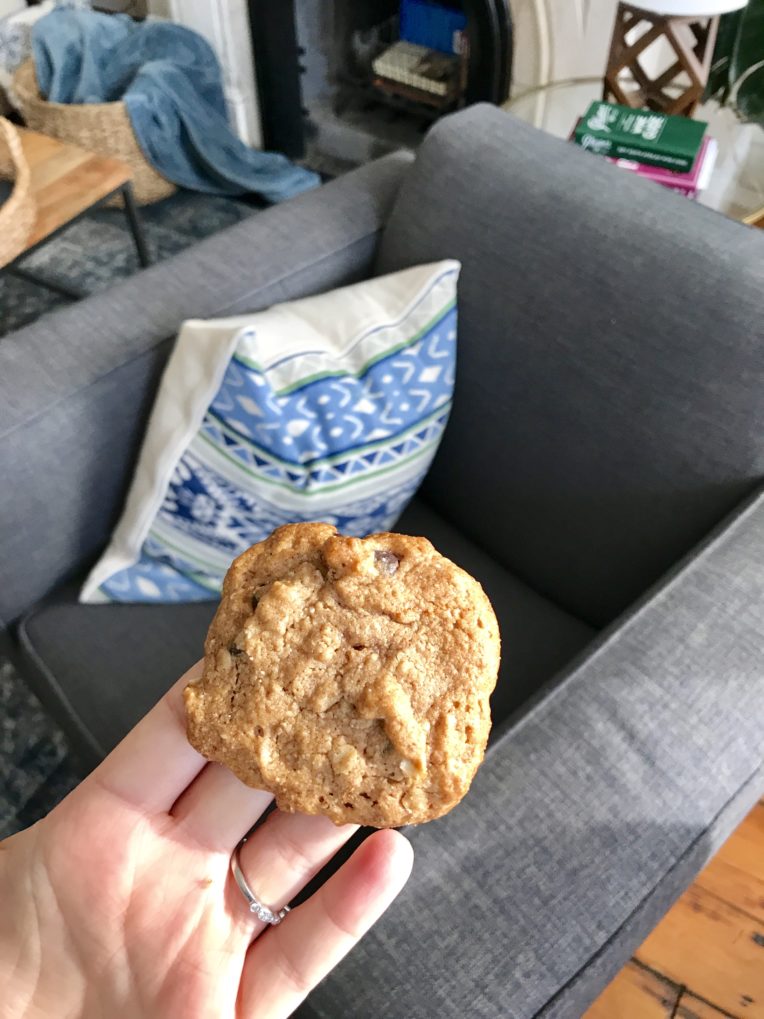 If I would have just eaten the grapes I would have been hungry again in 20 minutes since grapes are simple carbohydrates – meaning they satisfy hunger for a short period of time and give you quick energy, but you’re hungry again soon after. If I was making dinner and feeling really hungry, I would snack on some grapes (or other fruit) to help calm that intense hunger without getting “full” while dinner was cooking. 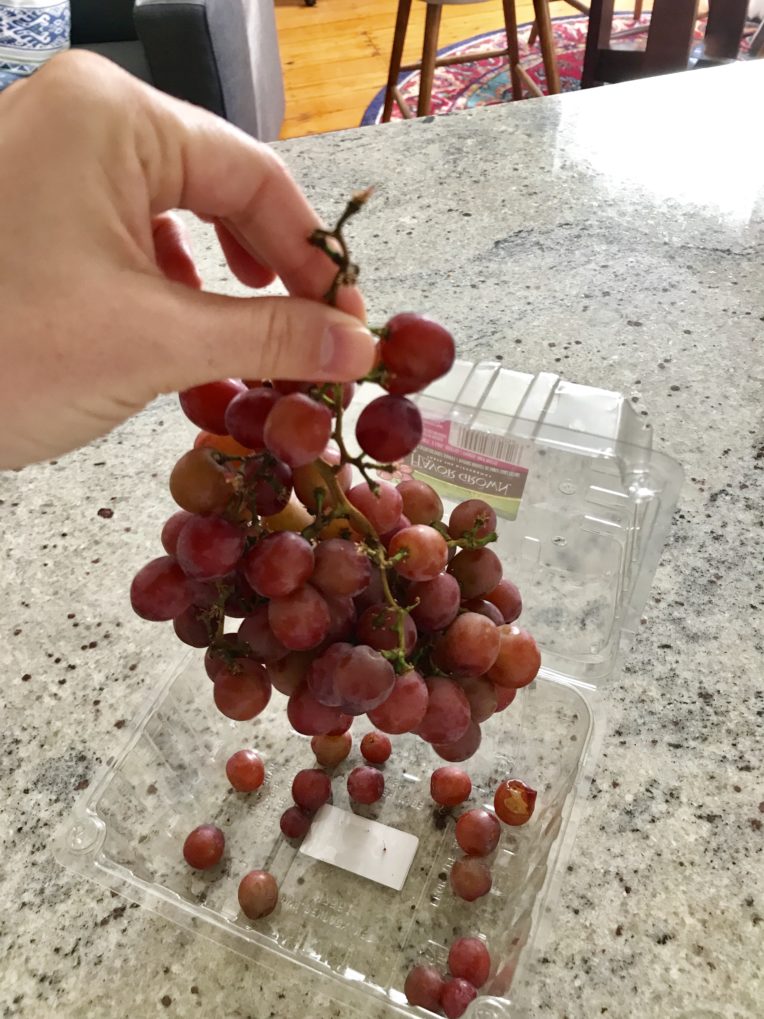 On Sunday when I was thinking about what to plan for dinners this week, I was in no mood to exert myself in the kitchen so I came up with a quick and easy meal – bbq chicken, corn, salad and roasted potatoes. I threw the chicken in the Instant Pot for 12 minutes, then shredded and added bbq sauce. We had a frozen bag of corn that needed to be used up. Chopped the potatoes, tossed in oil and sea salt and roasted until soft and golden and my version of a “salad” was mixed greens with feta cheese and dressing leftover from the dinner party we hosted last Friday. I think I spent 10 minutes “cooking” this meal. 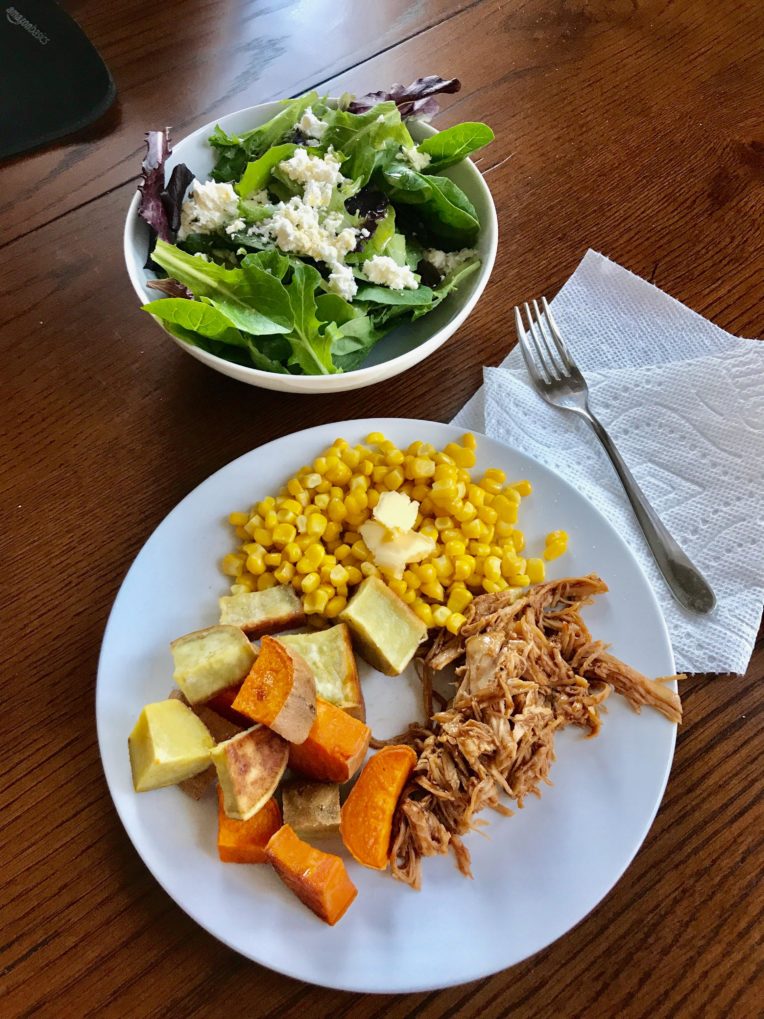 Sometimes convenience wins over having the most satisfying meal every night for dinner and that’s a part of normal eating. Was this meal everything I was craving? No. But it was tasty enough, nourishing and didn’t cost a lot of $$ like getting take out every night would? Yes. I had a satisfying breakfast, snacks and lunch so if dinner is so-so, that’s okay for me. Not every meal is going to be the most intuitive, satisfying experience ever. The beautify of intuitive eating is that the next meal or snack you eat can be whatever you want. That takes the pressure off every meal being “the best.”

But what WAS satisfying was leftover ice cream cake that I made for Nick’s birthday. I ate until a 6ish on the hunger/fullness scale at dinner so I had plenty of room for a good serving of ice cream cake. For the cake, I layered brownies on the bottom, then a layer of vanilla ice cream, then crushed cookies mixed with caramel sauce, more vanilla ice cream, and topped with whipped cream and chocolate shavings. I just bought everything at TJs so there was zero cooking involved. It was epic. 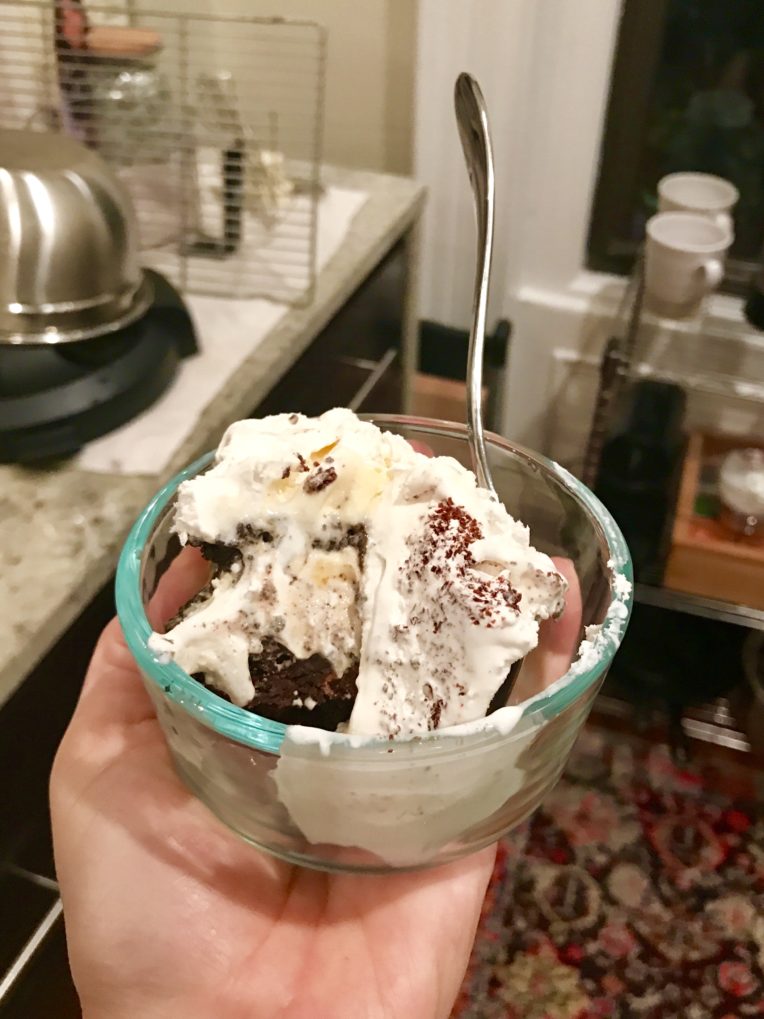 Usually I’ll have a bedtime snack about an hour or two after dinner and eat till a 7ish on the scale, but dinner was a little later which is why I saved room for dessert which took me from feeling full to 100% satisfied and to that 7ish mark. I’ve eaten this ice cream cake almost every night since making it and knowing that I can have it for breakfast, snacks or a bedtime snack allows me to feel satisfied without eating the whole thing. A few years ago, this would have felt impossible so if that’s the case for you, that’s okay. Eating ice cream and baked goods after a nourishing meal or at least when I’m not feeling really hungry and eating them often has been key for me to feel fully competent and calm versus chaotic and helpless around these foods.

Intuitive eating isn’t about perfection and it’s not about eating only when you’re hungry and never having moments of feeling too full. There is a lot of nuance with nutrition. Intuitive eating will look different from person to person and from day to day. No day is ever the same! Our bodies are dynamic and so their needs and hunger change for reasons perhaps known to us, but also for reasons we will never know. This is all one big learning process.

I’d love to hear your thoughts in the comments and what you’re learning! Happy weekend!