We’re in flight back to New York after a very full 4 days in Europe. I left off on Friday with a quick recap of our first 36 hours in Lausanne. Friday afternoon was the wedding of our friends, Nate and Caroline, who we’ve known for a few years in New York. Caroline was born in Switzerland and her parents now live in Lausanne. It was really interesting and a lot of fun getting to know her family and seeing where she grew up. Nate is actually from Indianapolis, only a few miles from where I grew up. They met at Penn several years ago, so this wedding has been long awaited 🙂 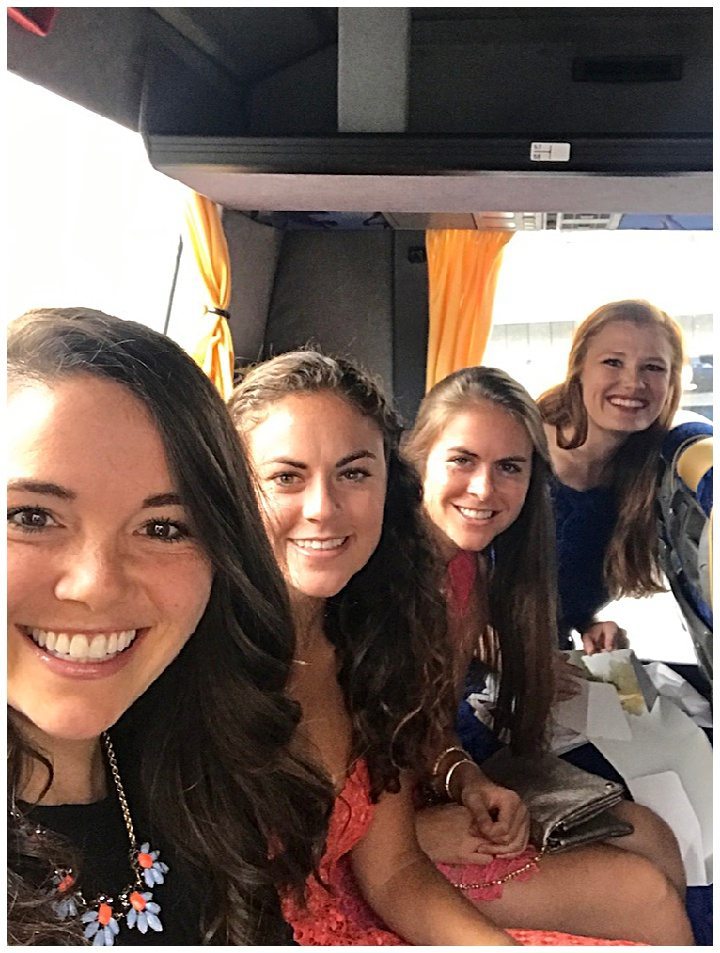 After a run + lunch we all loaded up on a charter bus to drive 45 minutes to the ceremony venue — the same church that Caroline’s parents were married at exactly 30 years before. How sweet, right? 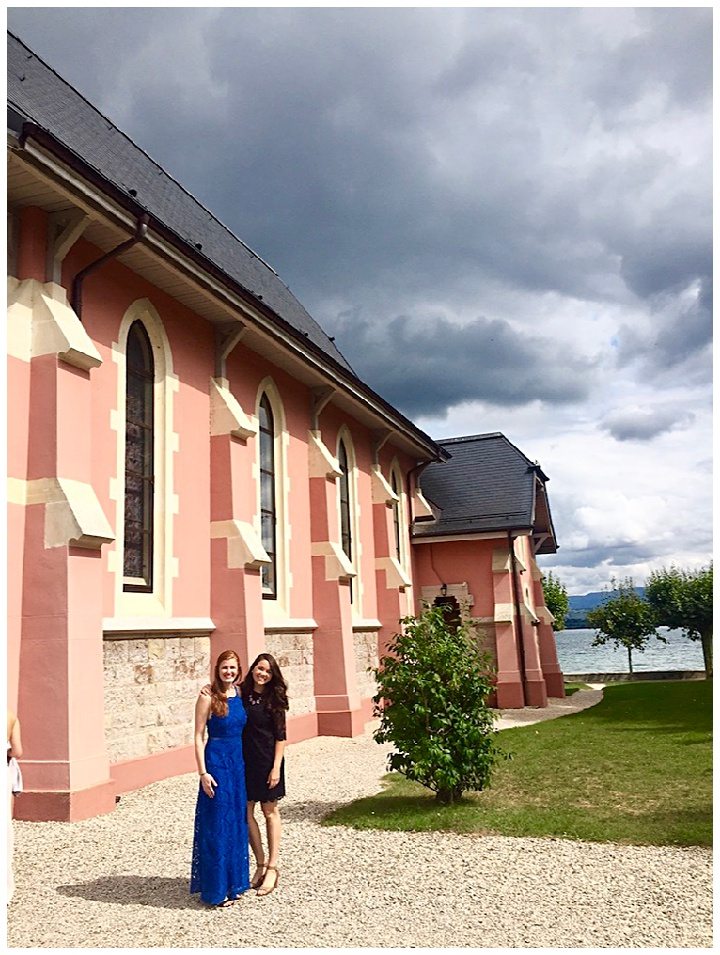 The ceremony was beautiful and both Caroline and Nate looked absolutely incredible. So much happy! 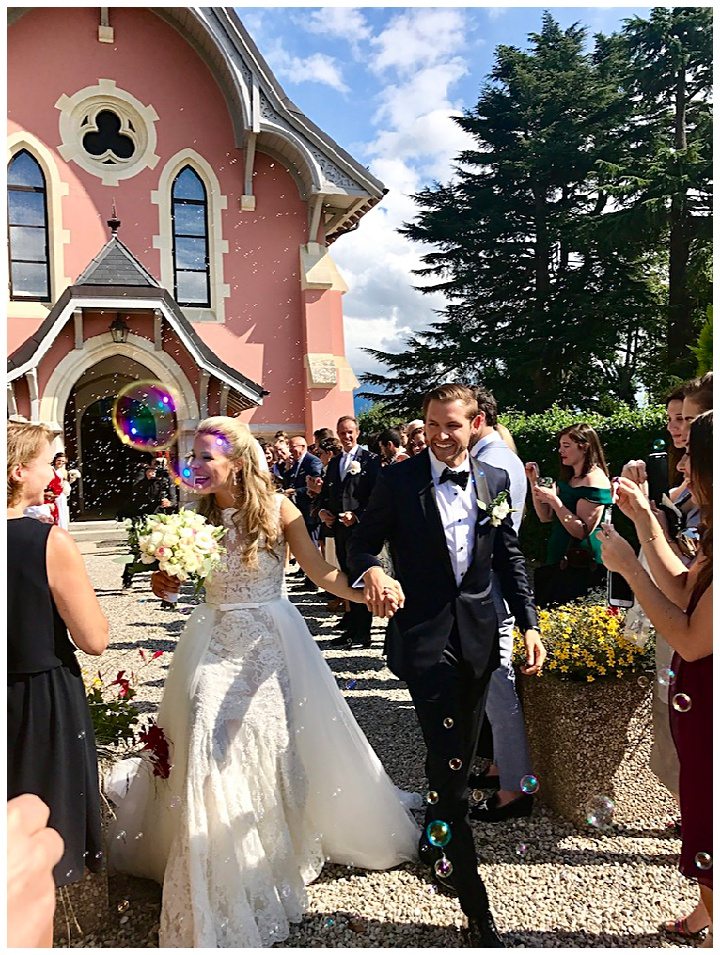 The weather had been rainy on and off all morning, but during the ceremony the clouds parted. By the time we exited the church for cocktail hour, there was a breathtaking rainbow. I have never seen a rainbow so bold in color before! 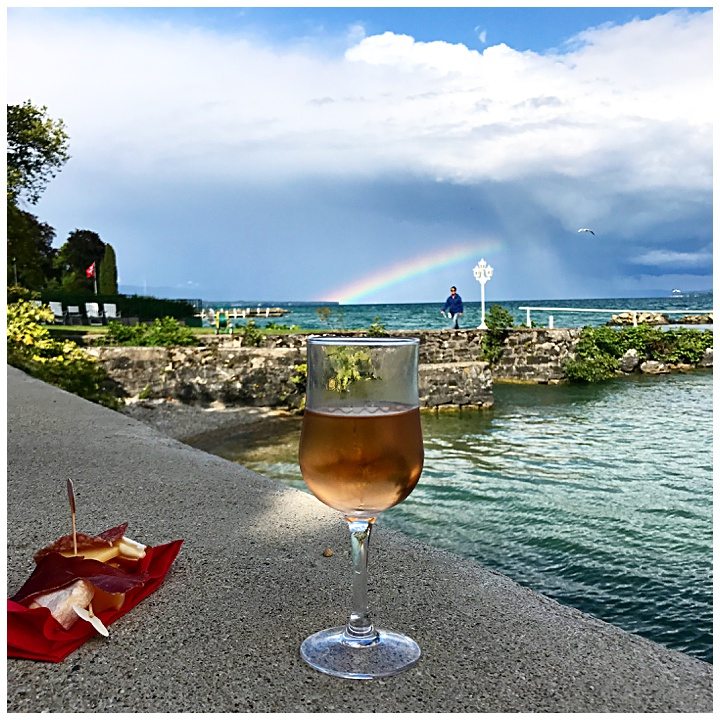 We had a short cocktail hour and then all loaded back on the bus to head to Lausanne for the reception that was held in the Beau-Rivage Palace. It was as gorgeous as it sounds. 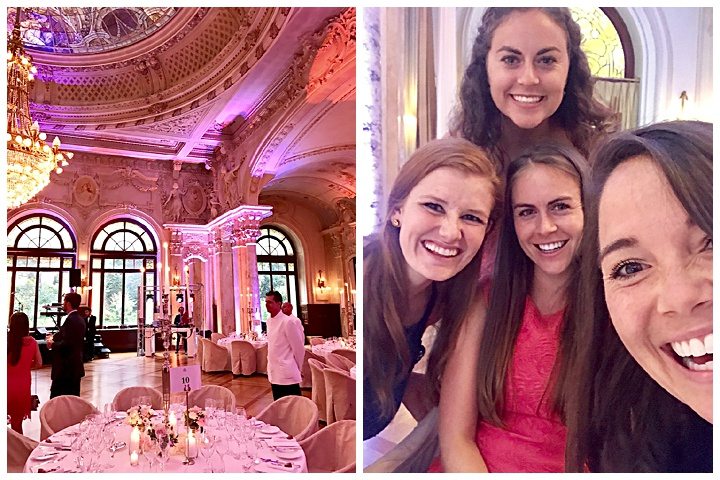 In America, weddings last until like 10 or 11pm…at least the ones I’ve been to. I’m not sure if this was European culture and Nate and Caroline wanting to show everyone who traveled a long way a really good time (they are incredibly hospitable)…but the reception went from 6:30pm until 2am. And it was awesome. 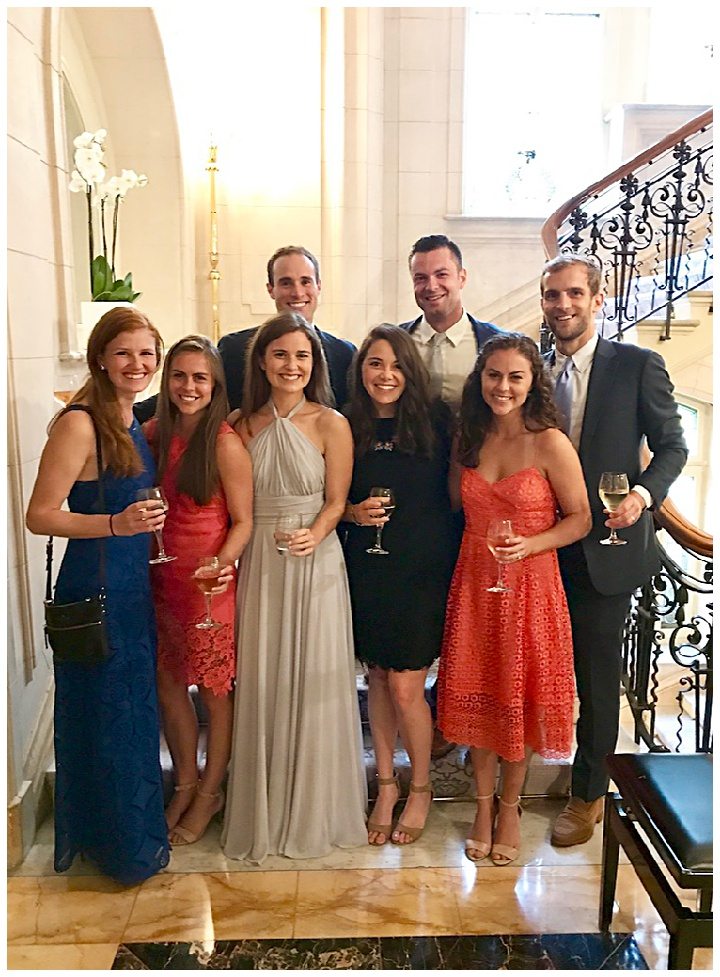 Dinner was delicious and included tuna tartar,  puff pastry wrapped veil and ended with a lemon sorbet dessert. In between courses there were heart felt speeches, dances with their parents and a couple of other fun surprises from the wedding party. The hours flew by and around 11pm they opened up the dance floor. 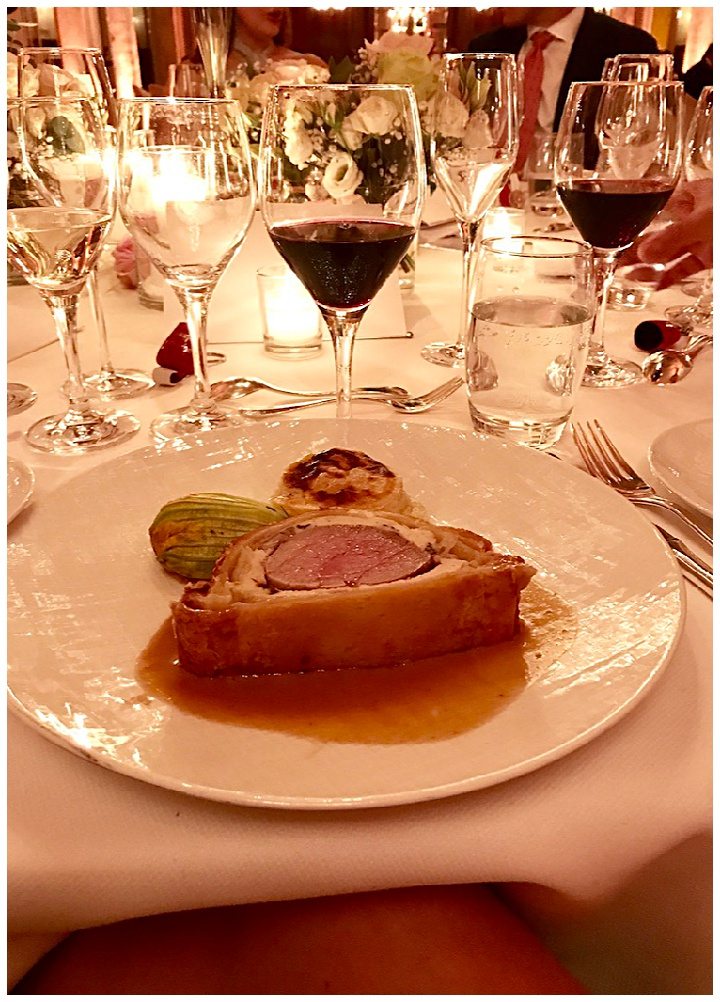 From 11 to 2am we danced nonstop. Fun is an understatement. 95% of the wedding was up and dancing the entire time and the band was fantastic! We made it home and into bed around 3am and I slept like a rock until 11am. 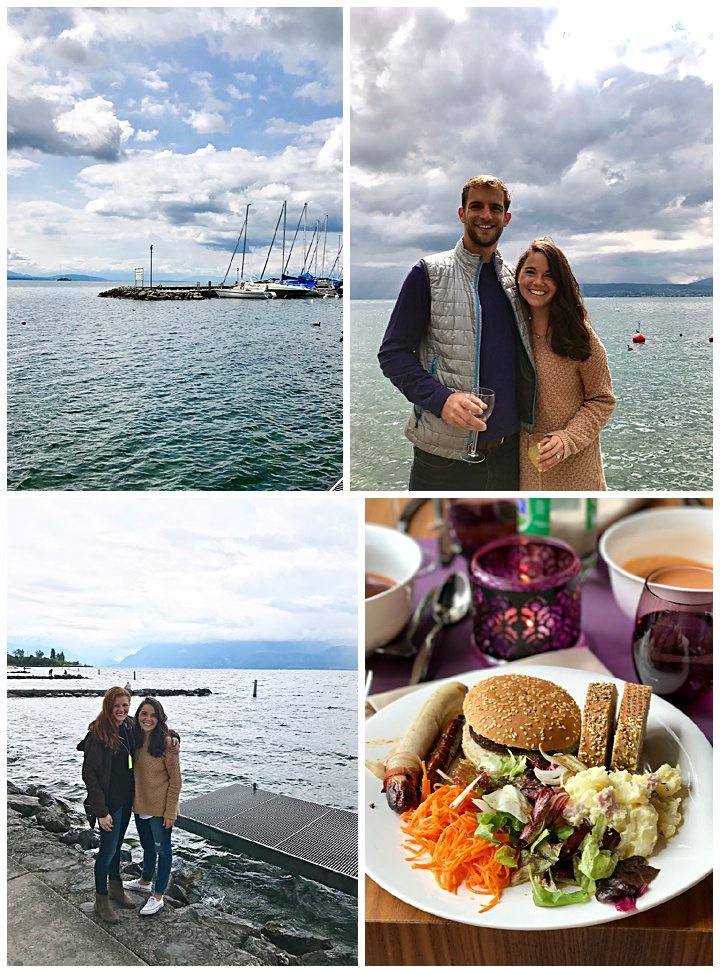 The next day was the final event – a goodbye “bbq” at a country club on the water. Indiana does bbqs very different than Lausanne ha. It started at noon so we didn’t have much time in the morning before we had to head down.

The weather was chilly, which I loved. We spent the afternoon celebrating Nate and Caroline, drinking mimosas, eating hamburgers, sausages and a variety of vegetable salads. There was also homemade babaganoush that was amazing. I ditched the hamburger buns in favor of several pieces of bread with babaganoush. And we finished the afternoon with gelato cones. 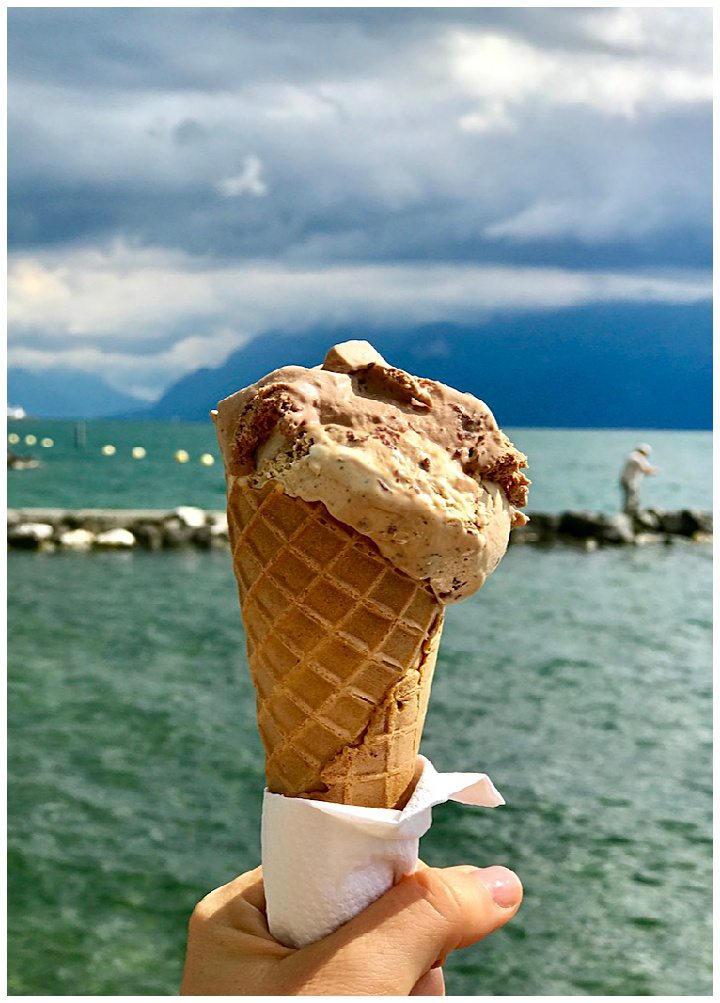 Many of our friends were leaving that next morning so we said goodbyes to them and then headed back to the hotel for a quick nap and to rest. I was wiped.

There were a few people staying another day so we made casual dinner plans with them for Saturday night. We walked around the corner from the hotel and ate pizza at Le Pinnochio, talked and laughed until the place closed at 11pm and then we headed to bed while the others stayed out longer. I needed sleeeepppp and a bedtime before 2am. 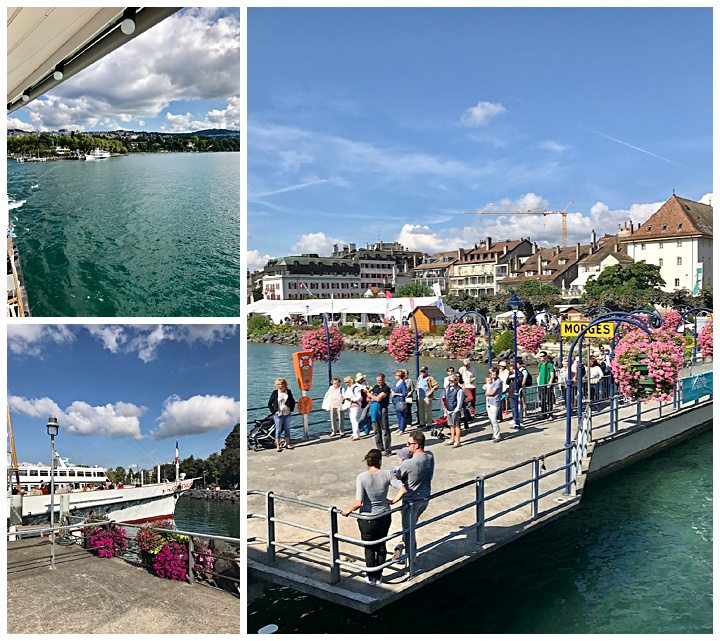 Sunday morning Nick and I woke up and ran along the water front. The weather was finally sunny with clear skies! It was a gorgeous morning. We ate breakfast at the hotel and then decided to take a boat over to this little town in France called Yvoire. It took about an hour and a half and the whole ride was full of stunning views. 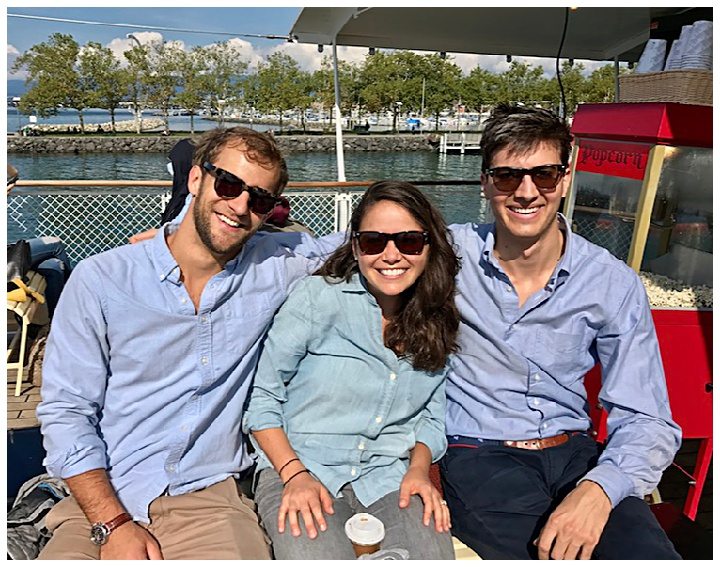 We meandered around the town soaking in the warm breeze and checking out all the cute shops before settling into a place for lunch. 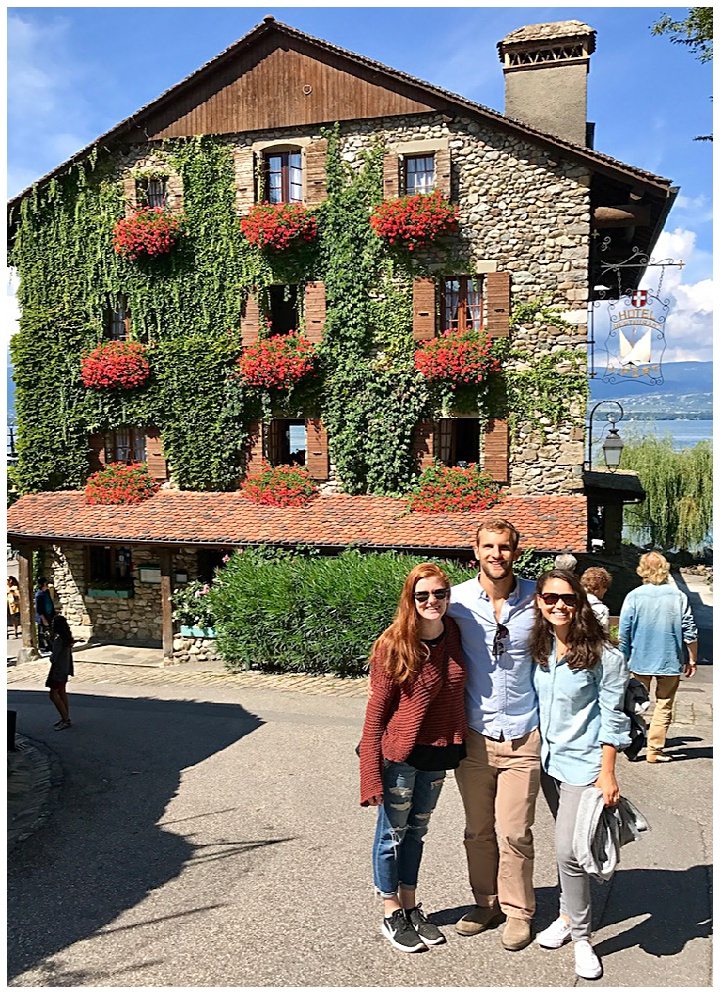 We ordered some wine and a charcuterie board. Four days in and I still wasn’t sick of bread + cheese. 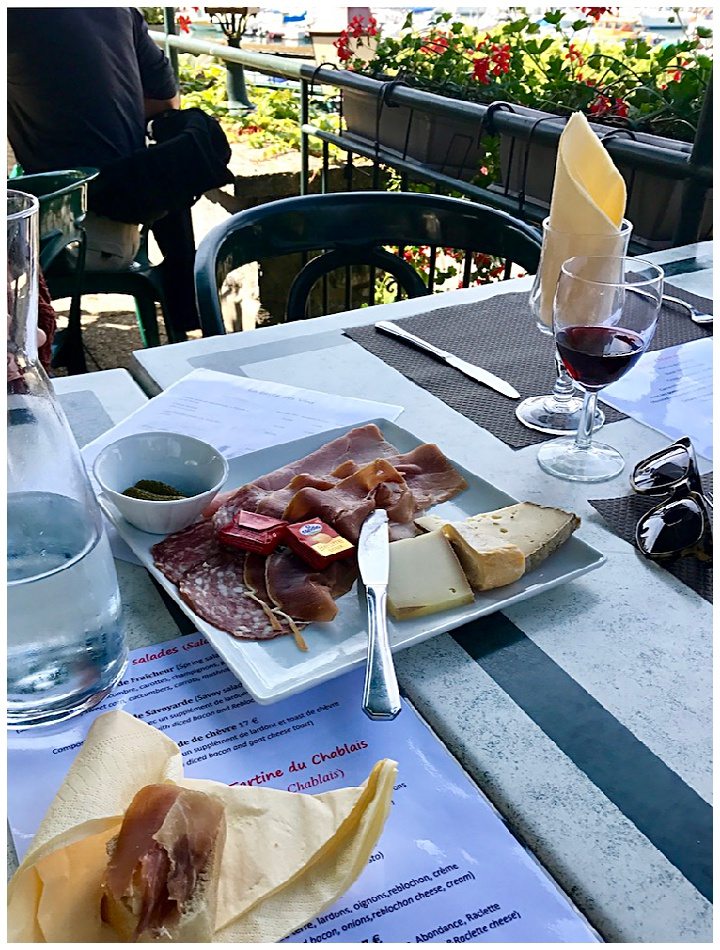 For lunch, I ordered the spring salad with bacon, hard boiled eggs and veggies along with these goat cheese toasts that were fab. We sat on the patio overlooking the water for a few hours before deciding to head into Geneva (where we were flying out of the next morning) early so we could get dinner there. 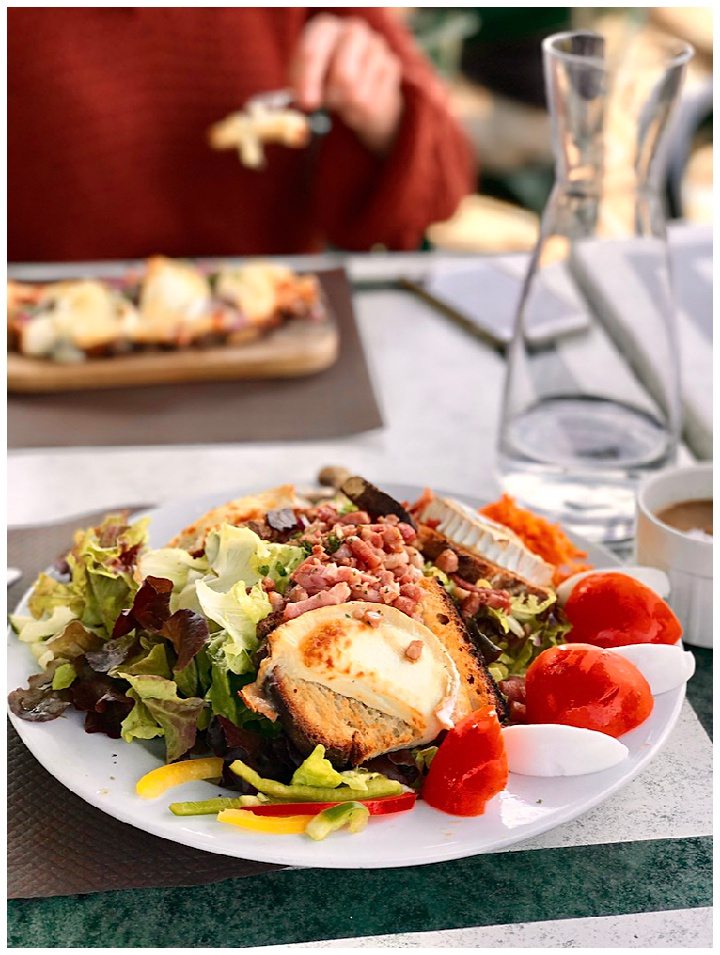 It was another 20 minute boat ride to the city of Nyon which was filled with more incredible views and then a 20 minute train into Geneva. 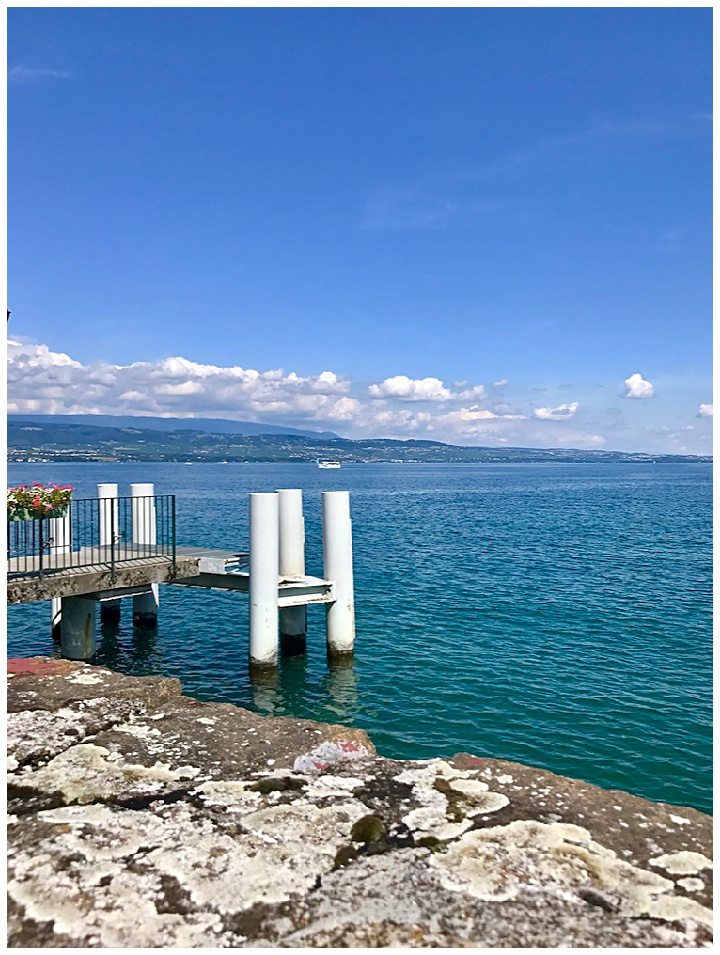 We dropped our luggage at our hotel and then headed down to the pier to get dinner at La Buvette des Bains. It’s apparently well known for their fondue and popular among the locals.

You ordered at the counter and the restaurant basically consists of all these teal picnic tables so you can eat on the dock. Barely anyone spoke English and there wasn’t an English menu (always a good sign when avoiding tourist traps) 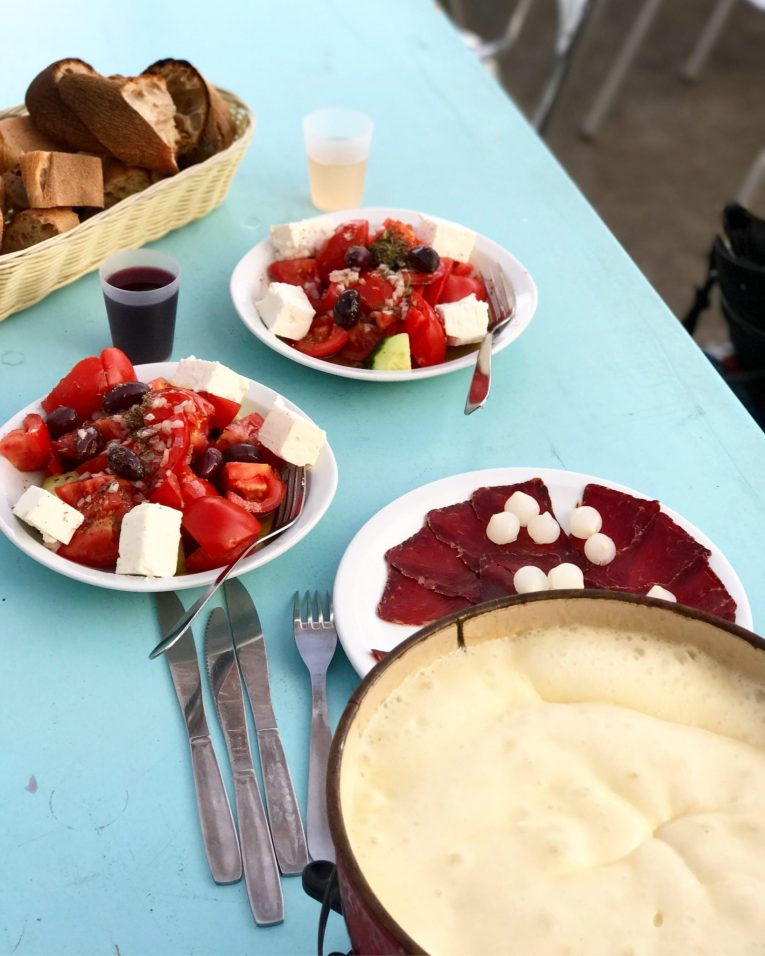 Between the three of us, we split greek tomato salads and a huge pot of fondue that we ate with dried meat and the chewiest, crustiest bread that was my favorite part while overlooking the water. 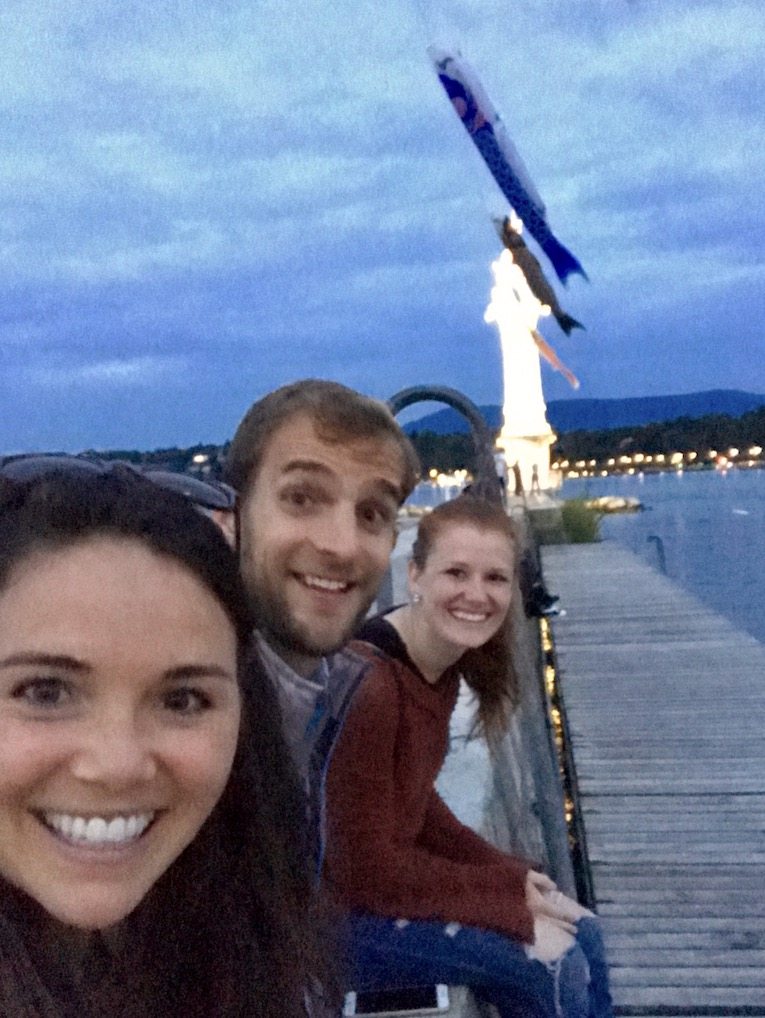 It was the best way to end four really awesome days in Switzerland celebrating two people we love a lot. Caroline and Nate (and their amazing families) did a phenomenal job at putting together this entire weekend. I know how stressful planning one wedding in America can be and I have no idea how much work planning what felt like three weddings in three days must have been. Thank you guys for including us in your big day! 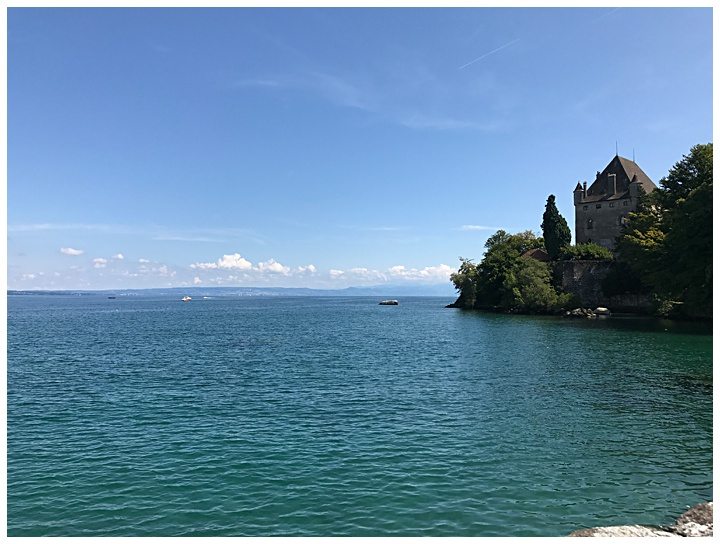 Brittany flew back a little earlier than us this morning – our flight headed out at 9am. We land at noon EST which will feel like 6pm Switzerland time. I’m going to try my best to stay awake until 7pm and then plan on getting like 11 hours of sleep before heading back to work tomorrow.

How was your long weekend?? Whether you were relaxing at home or traveling, share the best part in the comments!

Listening instead of speaking. Committed to unders